With this time Mutai bettered the course record of 42:34, which was set last year by compatriot Philip Langat. The women's race was won by Ethiopian Atsede Baysa in 49:15.

The fastest marathoner of 2012 (2:04:15), Mutai was the pre-race favourite and was the early leader in the group alongside defending champion Langat, Ethiopian trio Getu Feleke, Dawit Wolde and Limenih Getachew, and Kenyan David Kimetto, whose fastest marathon time this year is 2:04:16.

The six stayed together over the first five kilometres, clocking 14:29, but the pace increased over the next five kilometres as Mutai, Langat and Feleke went through 10km very close to each other in 28:42.

In the final third of the race, Mutai and Langat were too fast for Feleke who fell behind the two Kenyans by almost half a minute. Then in the final sprint on the streets of 's Heerenberg, Mutai – who earlier this year ran a very fast 10km of 27:29 in Boston – proved to be the fastest, beating Langat by one second.

The other race was a one-woman show. The 25-year-old Atsede Baysa was far too fast for the rest of the women's field.

By the time of the finish, which Baysa reached in 49:15, her lead had grown to 41 seconds as Macharia finished second. Dutchwoman Marieke Feldmann finished a distant third, more than five minutes behind the winner.

Wim van Hemert for the IAAF

BACK
Pages related to this articleAthletes
Phillip Kiprono Langat 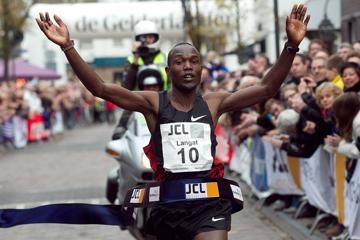 Langat and Afework the big winners in 's Heer... 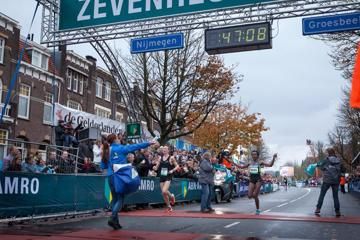