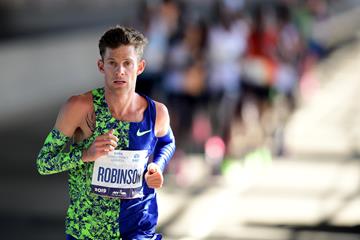 Brett Robinson won the Marugame Half Marathon in an Australian record of 59:57, recording the fastest time in four years at the World Athletics Silver Label road race on Sunday (2).

The 28-year-old took the lead at 18km before going on to win, taking more than four minutes off his PB in the process. Meanwhile, world marathon bronze medallist Helalia Johannes smashed her own Namibian record to win the women’s race in 1:08:10.

In the men’s race, a large pack of runners went through 5km in 14:13 and 10km in 28:26. The real racing started when 2017 Marugame winner Callum Hawkins started to push the pace at 13.5km. By 16.5km the lead pack had been reduced to four runners: Hawkins, Robinson, Yusuke Ogura and Taku Fujimoto.

Robinson took the lead at 18km and Ogura drifted back. Approaching 19km, Hawkins and Fujimoto also fell behind. Then Ogura started to bridge the gap, and took over the third from Fujimoto at 20.6km and second from Hawkins as they entered the stadium.

Robinson held on to the lead, though, and crossed the line in 59:57, taking 59 seconds off the Australian record set by Collis Birmingham at the 2013 edition of this race.

“It was a very tough race,” said Robinson. “The last few kilometres were very, but I’m very happy. The Japanese, Kenyan and Scottish runners put up a very good fight to the end.”

Ogura took almost two minutes off his PB to finish second in a Japanese record of 1:00:00, taking 17 seconds off the previous mark set by Yuta Shitara, who finished sixth in 1:00:49.

Hawkins finished third with 1:00:01, one second short of the PB he set when winning here three years ago, while Fujimoto finished fourth in 60:06, also inside the former Japanese record.

In the first half of the women’s race, Mao Ichiyama led Helalia Johannes, but Johannes took over the lead for good at about 12km. Although Charlotte Purdue came as close as 10 seconds at 20km, Johannes won with a personal best of 1:08:10.

It was a two-minute improvement on Johannes’ previous best, but her recent times at 10km (30:59) and the marathon (2:22:25) had hinted at a big half marathon breakthrough. The Commonwealth champion will defend her Nagoya Women’s Marathon title next month.