The 35th running of the Freihofer’s Run for Women 5km, an IAAF Silver Label Road Race, saw Kenya’s two-time world cross-country champion Emily Chebet prevail in a time of 15:26 on the streets of downtown Albany, New York state, on Saturday (1).

She left two of her compatriots, Esther Chemtai and Isabella Ochichi, trailing in her wake and having to settle for second and third place in 15:32 and 15:35 respectively.

In 2010, Chebet had set the Freihofer’s course record of 15:12, an exceptional time on the rolling Albany course, but temperatures in the mid-80s (approaching 30 degrees Celsius) on this occasion prompted Chebet to opt for a tactical strategy rather than an all-out assault on her own course mark.

From the gun, she settled in behind Chemtai and Ochichi, allowing them to control the pace and, perhaps, entertain thoughts of claiming the victory as they went through a first kilometre in 3:09 and an opening mile in 5:05.

The rolling hills just past the first mile quickly determined that the Kenyan trio would be almost certainly the ones on the podium.

Chemtai continued to maintain the momentum, with Ochichi on her shoulder and Chebet tucked in behind, and a significant amount of daylight started to be seen between these three and the few remaining chasers.

Leaving the shade of Washington Park, the Kenyans pressed hard along the open expanse of Western Avenue and Washington Avenue.

At the two-mile mark, passed in about 10:12, Chemtai held pole position at the forefront, with Ochichi alongside and Chebet still tucked in, and 45 metres back to Van Alstine, Gobena and Mohammed.

With little change at the front at 4km, it was evident that this was going to come down to a flat out sprint for the finish line and that was how it transpired, and that was how course knowledge played to Chebet’s advantage.

As the leaders wound their way back through Washington Park and out onto Madison Avenue, with 600m to the finish line, Chebet pushed to the front for the first time in the race and dramatically changed gear.

Ochichi, who had looked remarkably comfortable, was dropped almost immediately. Chemtai mounted an initial response, but she too soon had little to offer.

Along the final 200m downhill straight, Chebet had it all to herself, her six-second advantage at the line giving all the evidence that was needed of the dominance of her performance.

"We were right together; then I said to myself, `Go!’” reflected Chebet, in the wake of her impressive win.

Van Alstine was the leading US runner and cause a mild surprise in beating several better-known names when she came home fourth in 16:01.

Event Director George Regan was especially satisfied with how things went in his race.

“Obviously, the heat was a concern. The most important thing was for all of our runners to finish comfortably and safely. But, we had a record field, a fantastic race and wonderful champion. What more could you want for a 35th birthday present? This was a great day for Albany,” said Regan.

There was a record field of 5045 starters.

In the accompanying USA 5km Race Walk Championship, victories went to Richard Luettchau in a time of 22:28, and Maria Mitcha with 23:18. 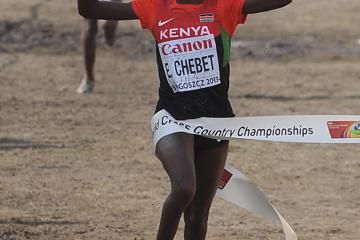 Chebet turns back the clock to win again – By... 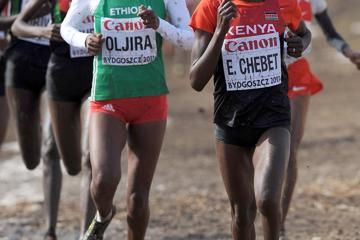 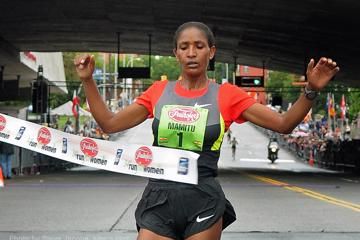