Baptiste blazes to another national record at Trinidad and Tobago Champs

For the second time in as many days, Kelly-Ann Baptiste left the Hasely Crawford Stadium in Port of Spain with a national record in her possession after she blazed to victory over 200m at the Trinidad and Tobago Championships, crossing the line in a hugely impressive 22.36 on Sunday (23).

Baptiste was 0.19 faster than the previous national record of 22.55, established by Semoy Hackett last year.

By the time she came off the bend, Baptiste was in full control of the race and she finished well ahead of London 2012 Olympic Games finalist Hackett, the silver medallist in 22.98. Kai Selvon clocked 23.05 to take third place.

However, her 200m outing, in the wake of her 10.83 national record on Saturday, which is also the fastest time in the world this year, potentially makes her a medal threat in both events.

“Definitely more excited about my 200 than I am about my 100,” reflected Baptiste. “I have been trying to piece together a great 200 for a long time. To come out here today and to be able to kind of figure it out, and run a good time behind that, I feel really good about that performance.”

Lalonde Gordon was also a satisfied athlete, on Sunday.

The 2012 Olympic Games men’s 400m bronze medallist captured the 200m title with a fast personal best of 20.26. Kyle Greaux and Jereem Richards picked up silver and bronze in Port of Spain, respectively clocking 20.57 and 20.72.

“Big PR, so I’m very, very happy,” said Gordon. “I just wanted to go out there and do something big. I haven’t been doing that for the whole year. I’m just trying to push myself and get back on pace.

“Right now, I’m lacking a lot of speed work. I don’t know how I run that time. That was a shock.”

Jehue Gordon was dominant in the men’s 400m Hurdles. The former World junior champion turned for home with a huge cushion on the field. He tightened up a bit in the final stages of the race, but still recorded a victory by more than a second in 49.25. 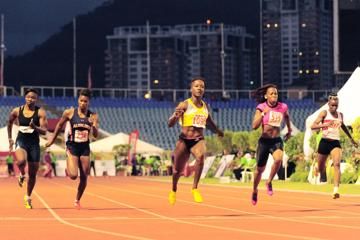