Masai hopes for debut to remember in Birmingham

Masai, the four-time world cross-country medallist, heads to the English West Midlands following a relatively quiet year, during which she has focused exclusively on road racing. The 24-year-old will be encouraged, however, by a first victory in 2014 in Amsterdam last month, where she prevailed over 10 miles in 53:09.

Daunay, on the other hand, has enjoyed the best season of her long career. The 39-year-old French national record-holder for both the half and full marathon drops down in distance from the event at which she took a fine gold medal in Zurich this summer and returns to racing over 13.1 miles for the first time since she won in 1:09:17 in the Czech Republic in May.

The 2009 New York Marathon third-place finisher finished second to Italy’s Valeria Straneo in Paris over 10km earlier this month and will be tough to beat on a hilly course that in many ways mirrors the one on which she triumphed back in August.

Daunay’s predecessor as European marathon champion, Italy’s Anna Incerti, is also in the race, as are Portugal’s Ana Dulce Felix and Kenya’s Doris Changeywo. The latter was a silver medallist at the 2010 Commonwealth Games but hasn’t competed internationally since 2012, while Dulce Felix, the 2012 European 10,000m champion and a regular on the British roads, is using the event to prepare for next month’s New York Marathon.

Incerti, who was sixth behind Daunay in Zurich, won comfortably over 10km in Milan two weeks ago and, with a personal best of 1:08:08 from 2012, could challenge.

Uganda’s Thomas Ayeko returns to defend his title in the men’s race, but faces tough opposition in the form of Kenyan 10,000m champion Josphat Bett.

Ayeko appeared to be on the verge of a big breakthrough when he surged clear in the latter stages of last year’s race on his half marathon debut, but he has raced sparingly in 2014 and failed to make an impression over 5000m and 10,000m at the African Championships in August.

A fifth-place finish in 1:02:13 on his return to the roads at the Great North Run in September hints at a return to form for the 22-year-old, who will need to be at his best to see off the challenge of Bett, who himself will be hoping to improve on a fourth-place finish over 10 miles in Amsterdam four weeks ago.

Bett, the 2008 world junior 10,000m champion, took medals at both the Commonwealth Games and the African Championships over 10,000m this summer and has a half marathon best of 1:01:01, which is more than a minute quicker than his Ugandan rival’s strongest performance.

Both will have to be wary of the threat posed by Bett’s 31-year-old namesake, Emmanuel, who won the 2013 Great South Run in challenging conditions and has a personal best of 1:00:56 set two years ago.

Indeed, the veteran Kenyan boasts an impressive list of best performances ranging from two miles upwards and ran 13:14.91 for 5000m as recently as July.

Home support will be focused on Steve Way, the 40-year-old ultra-distance runner who finished 10th in the marathon at this year’s Commonwealth Games, while Kenya’s Kevin Kochei and Joel Kimutai have both competed well over 13.1 miles this year. The former in particular has raced prolifically and finished seventh at the recent Great Scottish Run. 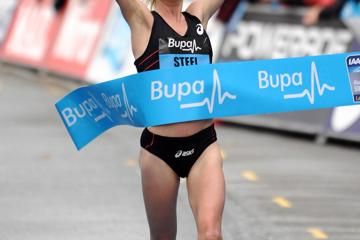 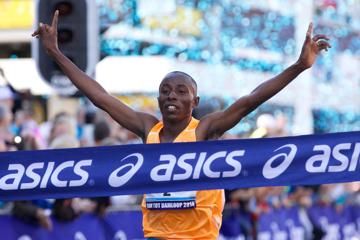