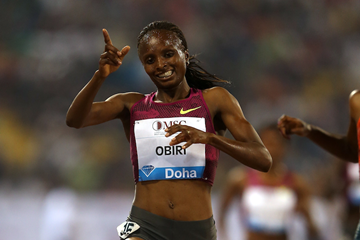 Dozens of the world's finest athletes are gathering in Doha to help kick off the 2019 IAAF Diamond League on Friday (3), which gets underway for the tenth consecutive year in the Qatari capital, and with it the chase for a piece of the series’ US$8 million prize money purse.

Among the cast assembled, which includes six reigning world champions, eight reigning Olympic champions and winners of nine 2018 Diamond Trophies, are Caterine Ibarguen, the 2018 World Athlete of the Year, and world 5000m champion Hellen Obiri, whose star rose even higher just over a month ago at the World Cross Country Championships Aarhus 2019 where she battled to an impressive victory over the most difficult course in that event's history.

Here, Obiri will run on more familiar and conventional turf as she returns to the city where she broke the African 3000m record in 2014, clocking 8:20.68, still the fifth fastest performance of all-time. That was at the Qatar Sports Club stadium, home to this meeting for its previous nine editions. This time she'll take to the line about 13 kilometres to the southwest, at the newly-refurbished Khalifa Stadium in the city's Aspire Zone district which in less than five months time will host the IAAF World Athletics Championships Doha 2019.

Her chief opponent is long-time rival Genzebe Dibaba of Ethiopia, the world 1500m record holder who has captured the last three world indoor 3000m titles. She too will be making her 2019 outdoor debut.

The strong field in the evening-capping event includes Beatrice Chepkoech, the world record holder in the 3000m steeplechase, and Caroline Kipkirui, the winner here last year. Both have sub-8:30 lifetime bests.

Ibarguen, the world and Olympic champion in the triple jump, famously ended her 2018 campaign with a long jump/triple jump double-double, winning both events at the Diamond League finals and at the IAAF Continental Cup within the span of 11 days. In her first appearance since, the Colombian will take on Olympic champion Tianna Bartoletta of the US and in-form Australians Naa Anang and Brooke Stratton, who have leaped 6.81m and 6.74m respectively earlier this season.

Ibarguen and Obiri were two of the dominant figures in Diamond League action in 2018, the second season in which the 14-meeting series utilised its successful championship-style model, a format that continues in 2019.

How does it work?

Athletes earn points in the first 12 stops to earn qualification for the two final winner-takes-all meetings to be held in Zurich (29 Aug) and Brussels (6 Sep). As part of the overall US$8 million in prize money available across the series, the finals offer a prize purse of US$3.2 million, with $100,000 at stake in each of the 32 Diamond disciplines. Each discipline winner collects $50,000, a stunning Diamond Trophy, the title of IAAF Diamond League Champion, and this year, a wild card entry to the World Championships that begins three weeks after the final in Brussels.

Kendricks vs Braz in the pole vault

Other jumps action includes the men's pole vault where world champion Sam Kendricks of the US will meet Brazil's 2016 Olympic champion Thiago Braz. Kendricks opened his season with a 5.80m clearance at the Drake Relays last weekend, while Braz will be making his outdoor season debut. European indoor silver medallist Piotr Lisek of Poland, who's been training in Doha, is also on the slate. He topped 5.93m indoors this past winter joining Kendricks as the co-world indoor leader.

With Diamond League champion Mariya Lasitskene absent, the women's high jump will largely be a test of form for those hoping to eventually challenge the authorised neutral athlete's dominant hold on the event.

Bulgaria's Mirela Demireva, the Olympic and European silver medallist is leading that charge after a notable 2018 season in which she joined the event's two-metre club and ended Lasitskene’s win streak at 45 in Rabat. Italy's Elena Vallortigara also joined that club last season after topping 2.02m in the London stop of the Diamond League, but has only topped 1.92m once since.

Lithuanian Airine Palsyte and Ukraine’s Kateryna Tabashnyk both topped 1.99m indoors and hope to be in the hunt on Friday.

One of the biggest stars at the meeting - both literally and figuratively - is shot put ace Ryan Crouser, the Olympic champion who unleashed a 22.74m bomb in Long Beach, California, on 20 April, the longest put in the world since 1990 which elevated him to No6 on the all-time list.

Three men in the discus field have reached beyond 67 metres this year, including surprise early season world leader Ola Stunes Isene (67.78m) of Norway, Mason Finley of the US and Ehsan Hadadi of Iran, who claimed the Asian title at Khalifa Stadium on 21 April. Christoph Harding, the 2016 Olympic champion, is also in the field, along with Swede Daniel Stahl, the world and European silver medallist, who'll be making his first appearance of the year.

In the men's 200m, the spotlight will fall on reigning world champion Ramil Guliyev. After finishing third in his Diamond League opener over the distance here last year, the 28-year-old from Azerbaijan went on to produce five of his six career sub-20 second runs, capped by his 19.76 victory at the European Championships.

In the women’s race, triple European champion Dina Asher-Smith gets her season underway where she'll line up as the favourite. Last season, the 23-year-old Briton sped to a 10.85/21.89 double at the European Championships to end the season as one of the world's finest sprinters. She was to meet up with another here, African 100m champion Marie-Josee Ta Lou, but a calf problem forced the 2017 World Championships double dash medallist to pull out.

Instead, Asher-Smith will take on Phyllis Francis of the US, the 2017 world 400m champion, and her compatriot Kyra Jefferson, who rose to prominence after a 22.04 personal best to take the NCAA title in 2017.

Muhammad vs Russell in the 400m hurdles

The women's 400m hurdles looks to be a face-off between Olympic champion Dalilah Muhammad of the US and Jamaica's Commonwealth Champion Janieve Russell. Russell was the most consistent full lap hurdler on the Diamond League circuit last year, finishing first or second in her first six meetings. But she was a well-beaten third in the final where Muhammad prevailed to take the trophy. Both will be making their 2019 debuts.

Ukraine’s Hanna Ryzhkova and Meghan Beesley of Great Britain, the silver and bronze medallists from last summer's European Championships, are also in the field along with Ashley Spencer of the US, the 2016 Olympic bronze medallist.

On paper, the sprint hurdles field is very evenly matched, with the focus falling on Olympic champion Brianna McNeal. In her best season since 2016, McNeal took the Diamond League crown last season after opening her Diamond League campaign with a runner-up finish in Doha.

Three men figure prominently in the men's 800m, always among the most popular events in Doha: Emmanuel Korir of Kenya, last year's world leader at 1:42.05 and the Diamond League champion; African champion Nijel Amos of Botswana, the man who handed Korir his only defeat last season and history's fifth fastest man; and US star Donavan Brazier, whose stellar 2019 indoor season included a 1:44.41 Area record and a world indoor 600m best of 1:13.77.

But also keep an eye on Qatari Abubaker Haydar Abdalla who sped to a 1:44.33 world lead to take the Asian title here less than two weeks ago, and master tactician Adam Kszczot of Poland, the world indoor champion.

In the men's 3000m steeplechase, world and Olympic champion Conseslus Kipruto has been sidelined with a foot problem, putting the focus on his Moroccan rival Soufiane El Bakkali, who finished second to the Kenyan at last year's Diamond League final in Zurich in one of the season's most dramatic and unforgettable contests. Like most of the field, he'll be making his 2019 debut.

The field includes Kenyans Amos Kirui, the 2016 world U20 champion and Commonwealth bronze medallist last year, and Benjamin Kigen, the winner in Rabat last year with an 8:06.19 personal best.

The women's race is wide open on paper, with world and Olympic silver medallist Francine Niyonsaba of Burundi, 2017 world bronze medallist Ajee Wilson of the US and Kenyan Margaret Wambui, the Olympic bronze medallist, among the favourites. All will be making their season debuts.

The story in the men's 1500m is the on-going rivalry between training partners Timothy Cheruiyot and Elijah Manangoi of Kenya. Manangoi is the world champion but Cheruiyot was clearly the better on the circuit last year, breaking 3:30 twice before taking the Diamond League title.