The Cross Internacional de Soria, the second leg of this season’s World Athletics Cross Country Permit series, will take place on Sunday (17) at the Monte Valonsadero circuit, a beautiful forest on the outskirts of Soria, well known for having been a frequent training venue for 1992 Olympic 1500m champion Fermín Cacho and 1997 and 1999 world marathon champion Abel Antón.

The men’s 10km contest features the whole podium from last Saturday’s permit meeting in Atapuerca where Spain’s Ouassim Oumaiz was a surprise victor, getting the better of Ugandan duo Thomas Ayeko and Timothy Toroitich.

Oumaiz, born in Spain to Moroccan parents, moved to the High Performance centre in Madrid two years ago to train under the guidance of Antonio Serrano. The 20-year-old is the European U23 cross-country silver medallist and proved to be in stellar form in Atapuerca. Soria will be his last stop before the European Cross Country Championships in Lisbon on 8 December.

The Spaniard will be eager to confirm his win last weekend was no fluke; meanwhile Ayeko and Toroitich will be trying to extend the Ugandan domination in Soria as the East African nation has claimed six successive victories thanks to Dickson Hiru (2013), Toroitich (2014-16) and Jacob Kiplimo, a commanding winner in 2017 and 2018.

Their compatriots Albert Chemutai, a 2017 world 3000m steeplechase finalist, and Maxvell Rotich, a 1:01:11 half marathon performer, will also be in contention on Sunday alongside Burundi’s Thierry Ndikumwenavo, sixth in Atapuerca, and Eritrean steeplechaser Yemane Haileselassie.

Spain’s Teresa Urbina and Bahrain’s Rose Chelimo should be regarded as the main favourites in the women’s 8km contest.

The 34-year-old Spaniard finished eighth in Atapuerca last Saturday and boasts a 9:41:95 PB in her specialist event, the 3000m steeplechase. She beat Chelimo, the 2017 world marathon champion, by 17 seconds in Atapuerca, so the Bahraini will try to bounce back from that defeat on Sunday.

Weather forecasters predict a rainy and cold day on Sunday with a temperature no higher than 5C by the time of the event. 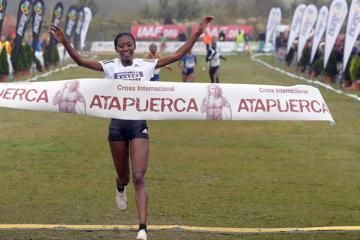