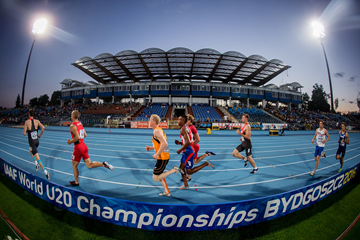 Council decisions on rules and events for 2019 and beyond

The 215th IAAF Council Meeting made a range of competition decisions this week on subjects including rule changes, entry standards and programme changes for World Athletics Series events, and the new World Rankings system. These are detailed below:

Council approved the new Bidding Rules, effective 1 January 2019, after conducting a pilot process this year, which resulted in the selection of Budapest as the host of the 2023 World Championships. This process, whereby the IAAF Council selects an area to host the event, and then a bid evaluation panel recommends a host city from interested candidates, will be adopted for World Athletics Championships and World Indoor Championships initially, and eventually for all World Athletics Series events.

A proposal was made to amend Rule 163.4 (lane infringement) in the wake of the number of disqualifications during the World Indoor Championships in Birmingham this year, but the Council did not accept the recommendation, asking for further information. This means Rule 163.4 remains unchanged for the 2019 indoor season.

An amendment was approved to Rules 251 and 252 (Mountain Running and Trail Running), which will merge the mountain running and trail running rules to create a consistent approach to rule enforcement at these events, effective 1 January 2019.

An amendment was approved to Rule 170.10 (Substitutes for relay races) to allow four additional athletes to be used once a relay team has started the competition (applicable at all WAS events and Olympic Games).

Council approved the new IAAF Manipulation of Sports Competition Rules, effective 1 January 2019. This means the same standard of proof (i.e. the comfortable satisfaction standard) and the same processes of investigation and adjudication will apply to breaches of these rules as currently apply to alleged breaches of all other Rules under the Integrity Code of Conduct.

Entry standards for the IAAF World Relays Yokohama 2019 were approved and it was agreed to advance the final entry deadline one week earlier. The timetable will be released by the end of this year.

The following amendments were approved to the competition programme of the World U20 Championships Nairobi 2020: the addition of a mixed 4x400m relay; the elimination of the 10,000m for men (both men and women will compete over 3000m and 5000m); introduction of the Gunderson method (handicap based on points difference converted into time) for the final races of the combined events so the athletes finish in their final rank order (as used in modern pentathlon).

Council tasked the IAAF Competition Department to develop a final proposal for the Tokyo 2020 timetable (including the timing of road events), to submit to the International Olympic Committee and Tokyo 2020 before the end of the year. It also agreed to submit a request to the IOC for the inclusion of the women’s 50km race walk in the Tokyo programme, even though the deadline for 2020 Olympic programme changes has passed.

The proposal to post live World Rankings on the IAAF website from January 2019 was approved. This will allow athletes and member federations to see the rankings system in action during the 2019 season without it impacting on qualification for the World Athletics Championships Doha 2019. Council will further discuss the introduction of the World Rankings for the 2020 Olympic Games qualification process at its next meeting in March.