“Oslo Bislett Games is known for its world records on the track. Now our ambition is to become the most sustainable international athletics meeting in the world,” says meeting director Steinar Hoen.

Having had an oil company as its main sponsor for 29 years, the Bislett Alliance is now heading in a new direction. Together with ZERO it has reviewed all aspects of the event, searching for smart ways to cut emissions.

“From the moment the athletes arrive in Norway, we make sure that all transport is completely emission free,” said Hoen. “The athletes will travel by train to the centre of Oslo, they will stay at a hotel right next to Oslo Central Station and they will travel by tram or hydrogen bus to and from Bislett Stadium. In addition, we will use electric and hydrogen cars to transport the athletes to and from training sessions.”

To reduce the need for air travel for the athletes, the Oslo meeting has come to an agreement with the organisers in Stockholm. The two IAAF Diamond League meetings are scheduled to be held during the same week for the next three years and all transport between the two capitals will be by train. By taking this action, the environmental footprint is reduced by a round trip by air to and from Scandinavia for the athletes and their networks. And throughout the event, waste will be strictly recycled according to source material.

“This type of initiative – be it from individuals, businesses or NGOs – is a very important part of fighting climate change,” says ZERO managing director Marius Holm. “To succeed, it is obviously not enough just to wait for the politicians to take action. When one of Norway’s most prominent sports events takes the lead and does their part to cut emissions, others will be inspired to do the same.”

As part of the cooperation between ZERO and the Bislett Alliance, the Bislett Conference will be held on the same day as the Oslo Bislett Games.

The Bislett Conference will bring together the sport, finance and business communities in order for them to find inspiration, get new ideas and learn from each other. The conference is aimed at those who want to save the climate, but who also want to create jobs and contribute to value creation while doing it.

“Business and sports attract the same kind of people; people with aspirations, people who are committed and who may not necessarily choose the easy way out. Winning mind-sets,” said Holm. “If our fight for the climate is to be successful, we also need people with a winning mind-set.”

The Bislett Alliance and ZERO have worked closely with Oslo’s Municipal Undertaking for Cultural and Sports Facilities, the owners of the Bislett Stadium. In 2017, a number of actions will be taken to make the arena greener. All heating and electricity used by the stadium are to come from renewable sources and measures will be put in place to cut energy consumption.

“It is very exciting for us to be challenged by the Bislett Alliance and ZERO concerning environmental aspects, also for already-built facilities,” said Eli Grimsby, director of Oslo’s Municipal Undertaking for Cultural and Sports Facilities. “Bislett Stadium was finalised in 2005 when the environmental requirements that apply today did not exist. We take inspiration from the many good ideas that have been proposed during our work with Oslo Bislett Games and we will put them to use in the other cultural and sports facilities in Oslo,” 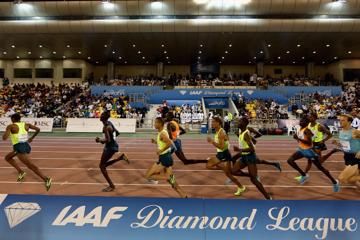