World and Olympic pole vault champion Katerina Stefanidi usually knows from the instant she leaves the ground if her jump will be a success.

“I know usually the second I take off if I am going to make the bar or not,” Stefanidi said during a press conference in Birmingham to launch the 13 reports from the world-first IAAF biomechanics study that was conducted at last year’s World Indoor Championships at the same venue.

The IAAF’s partner in the project, Leeds Beckett University, used 28 high-speed cameras to study 13 events at the championships in minute detail, including the women’s pole vault final, which they had also examined in their ground-breaking study at the IAAF World Championships London 2017.

The pivotal moment for pole vaulters when they plant the pole into the box and launch themselves into the air is among those that were put under the microscope, and both Stefanidi and her coach/husband Mitchell Krier said the analysis confirmed their own conclusions about her performance.

“The moment of impact in the box, which is what that shows, is very telling in whether you are going to be able to get on top of the pole and use the bend of the pole and get over the bar or not,” she said.

World indoor bronze medallist Stefanidi went into the championships in Birmingham last year carrying a hip flexor injury, which slightly impaired her performance (she cleared 4.80m compared with 4.91m to win in London in 2017) and she said a comparative analysis of her London and Birmingham performances clearly identified the difference.

“In London I’m accelerating massively in my last step and in Birmingham I am not, and the way I approach the box is what matters for me,” she said. “I think for us, that’s the No.1 thing we care about.”

“What we analyse in person is more fast data – I see her jump every day so I can process it in my head,” he said. “But this slow data gives us validity that what we’re seeing is actually happening and that allows us to make sure the changes we’re making are helping us, and really moving us forward.

“When you watch the same athlete every day, it becomes very difficult to pick up those little details.”

Dr Athanassios Bissas and Dr Brian Hanley, from Leeds Beckett, presented some of their findings at the press conference, revealing a host of fascinating details about individual events, including the men’s long jump.

Cuban teenager Juan Miguel Echevarria claimed his first senior global title by just two centimetres with a leap of 8.46m, from South Africa’s Luvo Manyonga (8.44m) in Birmingham last year, and the biomechanics study reveals that the difference was all in the landings.

“What we wanted to know was who lost distance when they landed and by how much and whether that mattered. The silver medallist Manyonga lost 33 centimetres on landing… the gold medallist Echevarria only lost 19 centimetres. The actual difference between them was two centimetres, so how you land is as important as how you take off. In fact if Manyonga hadn’t lost any distance, he would have jumped 8.77m.”

Both Stefanidi and Echevarria will compete tomorrow at the Muller indoor Grand Prix in Birmingham, the fifth of six stops on the IAAF World Indoor Tour.

All 13 biomechanics reports from the 2018 World Indoor Championships are now available for download from the IAAF’s website. 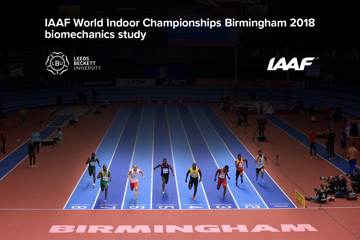 World-first biomechanics research on indoor a...