To perhaps best encapsulate the athletics journey undertaken by Sara Kolak, we need look no further than her right shoulder.

There the Croatian javelin thrower has five freshly tattooed Olympic rings sat alongside some scarring, which act as a symbolic reminder of the 15 months of pain on the sidelines which seriously threatened to derail her dreams of appearing at the Rio 2016 Olympic Games.

Instead, what happens next reads like a fairytale. In one of the biggest shocks of the Games, Kolak not only competed in Brazil, but she hurled the spear out to a mighty national record of 66.18m to strike gold.

Returning to Croatia a national hero, she had the tattoo poignantly inked as being “not on, but close enough to the scar to be a reminder”. It seemed the most emblematic act.

From promising handballer to javelin newbie

Born into a sporting family in the small town of Ludbreg, she initially dreamed of following in the footsteps of her mother – a leading handball goalkeeper at one of Croatia’s premier clubs. However, despite starting out in the seven-a-side indoor sport after winning a bike for claiming top spot in a school ball-throwing competition aged “13 or 14”, Kolak’s sporting path was to lurch in a different direction.

Encouraged to joined her local athletics club, she was introduced to the javelin.

“I thought as I was a handball goalkeeper, the javelin would be similar to throwing a ball, but I was wrong, and I had to correct a lot of things,” she says of her initial experiences.

Yet, curious to improve, she proved a quick learner and in one of her first ever competitions with the senior 600g implement, aged 15, she set a national U18, U20 and senior record with an eye-catching 55.69m throw in Maribor, Slovenia. It was a pivotal early moment in her career.

Two years later, Kolak made her debut on the global stage competing at the 2012 IAAF World U20 Championships in Barcelona. She finished 23rd in qualification with a modest best of 48.15m, but it proved a key learning experience.

“It was my first big competition and I was so disappointed,” she recalls. “I had a PB of 55 metres and I expected a lot more. I was without a coach and all alone. I was just a kid and I didn’t know how to rest before a big competition. In qualification my legs were so heavy. I shouldn’t have walked around Barcelona so much. It was a good test and I learned a lot.”

Post-Barcelona, she left her home town to live and train with a new coach in the northern Adriatic coastal city of Rijeka. She matured both on and off the track and in 2013 posted a slew of national records, topped by a 57.79m effort to earn bronze at the European Junior Championships in Rieti.

With shoulder problems first surfacing in March 2014 and Kolak opting to switch coaches to join Andrey Hajnsek’s group in Slovenia just one month prior to the IAAF World U20 Championships in Eugene, the Croatian had a far from perfect preparation for her Oregon examination.

Yet she shrugged off the inconvenience to hint at her big-time championship potential to take bronze with a best of 55.74m.

“It meant a lot to me (to win a medal) because of the (coaching) changes I had made and also competing in a very different time zone, which left me tired and sleepy,” she explains.

But the shoulder problems persisted. The pain became so intense she struggled to even sleep or move her arm. When the doctor recommended surgery later that year, Kolak was overcome with joy. But why joy?

“The rotator was really messed up and I cried from happiness because I knew my body needed the surgery,” she explains.

Yet what was supposed to take an estimated six months to fully recover from surgery instead took 15 months as she suffered a painfully slow road to full fitness.

She missed the entire 2015 campaign, but under the patient guidance of Hajnsek and after a competitive break of 19 months stretching back to the 2014 European Championships, she made her long-awaited return to competition in February 2016 at the Slovenian Winter Championships in Ptuj.

It did not start well. Crippled with fear and throwing like a “scared athlete” for the first four rounds, she struggled to fire. But with the encouragement of her coach, she found her groove in round five to launch the spear out to a national record of 60.24m. The following weekend she secured the Croatian winter crown in Split with a throw of 62.75m.

Her confidence boosted and “hungry” for more competition, she continued to impress. At the European Championships in Amsterdam last July she took the scalps of world champion Katharina Molitor of Germany and two-time Olympic champion Barbora Spotakova of the Czech Republic to claim a shock bronze with yet another national record of 63.50m.

“It was a surprise,” she says of the bronze medal, “but I was ready. I did everything my coach asked of me, I tried to be more professional and went that step further.”

Then in Rio and taking a positive attitude, the relative youngster caused a major upset to move from sixth at the end of round three into the gold with a ‘miracle’ throw and national record of 66.18m in round four.

“Everyone was in shock and people were saying, 'you have the gold medal',” she recalls. “Yet I was calm. I had two more rounds to go (and if nothing changed) I would be Olympic champion. The funniest part was I was calming everyone else down. Then the rain started. I like the rain. It is not a problem for me.”

In wet conditions, the world could not respond and Kolak remained on top of the pile. She was the Olympic champion.

“After my final throw it was like, what the hell is happening? I was like a kid running around in shock, like I’d lost something,” she recalls.

Since her Olympic success, life has changed for the talented Croat. She is recognised in the street and is getting used to being in the media and public glare.

She has returned to training, motivated and focused for the 2017 campaign. And while refusing to point to specific goals, she is confident she can improve in the future, where the IAAF World Championships in London remain the primary goal.

It was been far from a straight-forward journey, but Kolak has no regrets about the road she has taken.

“I look back at the shoulder injury as the best thing that ever happened to me,” she says. “It has helped define me in so many ways, which I don’t think I would have achieved through five straight years of big competition.”

And if she ever wants a reminder of where she has come from and what she has achieved, all she needs to do is take a glance at that right shoulder.

BACK
Pages related to this articleAthletes
Sara KOLAK 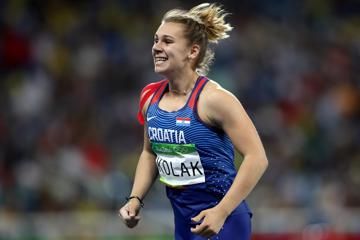 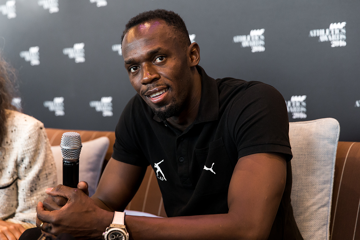