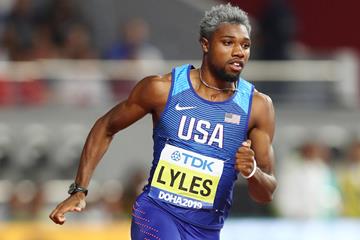 With Tokyo on the backburner, Lyles focusing on staying healthy, fit and prepared

When world 200m champion Noah Lyles heard the news yesterday that the Tokyo 2020 Olympic Games would be postponed, his reaction was similar to that of countless other athletes: relief.

Relief, as it turns out, on many levels.

“It was a little relief to see that it's been decided to postpone the Olympics because my first concern was that everybody would be healthy and everybody would have a fair place to compete,” he said.

And, for history’s fourth-fastest 200m sprinter, there was relief on a very personal level. As an asthmatic who struggles with seasonal allergies, he’s well aware that his immune system needs careful attention. The importance of that in a time when the world is combating the spread of an epidemic can’t be understated.

“It is a little scary,” he said, adding that he contracted swine flu during an earlies outbreak at age 12 in 2009 to underscore his point. “So I know that my body is susceptible to catching things - maybe more easily than others, that's why I have to work it harder.”

He said he’s keeping a close watch on his diet and overall health to make sure he’s “doing the right thing”. And focusing on the positives that each new day brings.

“I just see this as more time to hone my skills,” he said. “I'd been doing really, really well in training. So this just gives an extension to better increase my abilities.”

While his situation, like that of others, is fluid, he’s continuing to train, albeit under a much more restricted regime.

"We still want to maintain fitness and we still want to have some kind of a season. Just because the Olympics is gone doesn't mean that I won't run. My first love is running. So I want to do that.”

His training has been, and will continue to be, somewhat limited and ad hoc, for the moment at a park near his home in Clermont, Florida. He and his training partners train in groups of six, but arrive at different times - “we train apart,” he confirms - making sure that safe distancing is built into the heart of their sessions.

“It's only about an hour or two and then you go back to quarantine,” he said. “But it's a little bit of something to not go just a little bit crazy.”

Sessions include plyometrics and some running, which he describes as something akin to trail running.

“We can't really sprint because we're on grass - so it's really hard to do anything. It's a park area, and it's really like a trail. It’s not so much an open field - it’s like random spots that are open in the woods.” The longest stretch is about 300 metres along a trail which he’s been sometimes forced to share.

“There are hills in the middle of that so it's not flat, you're not going to be at going all out. Especially if you have people walking dogs and stuff like that.”

While his immediate plans are uncertain, his ambitions to propel his star even higher in the sprint world remain his key focus.

Even if the Olympics and World Championships were to fall in the same year? That’s not something he’s thought about, but will if and when that moment comes.

“That's something we'll come to when that time comes. Right now we're just trying to get past this moment in time.”

In the meantime, he’s also working on his music, preparing the drop an EP “in the next few months”, and playing video games, Dead by Daylight and Overwatch currently taking up much of that play time.

Even as he was cast by many as potentially one of the star prospects of the 2020 Games, Lyles welcomed the IOC’s decision, and was especially pleased by the stance that World Athletics and USA Track & Field had taken, in support of the Games’ postponement, before the decision to postpone was ultimately announced.

“I think everybody has been making really good safety decisions, not going forward. It makes you feel good when your sport, your governing body, is really on your side. Making sure that everybody gets fair play.”