It’s not as if Li Jinzhe came out of nowhere.

That year, a few days short of his 20th birthday, Li almost made the final of the Berlin 2009 IAAF World Championships. He was one of three to jump 8.01m in the qualifying competition, but Louis Tsatoumas was the lucky one to go through on count-back ahead of Li and Tommi Evila.

The following year, Li was fourth in the Continental Cup in Split. So there he was, under our noses all along.

Hiding in full view – so to speak: some reckon it’s the best place to hide. It certainly worked for Li Jinzhe.

So why, then, were we so surprised to see Li win at the Shanghai IAAF Diamond League? Mostly, it was because of the quality of the field he beat. The past three Olympic champions – Dwight Phillips, 2004; Irving Saladino, 2008; and Greg Rutherford, London 2012 – were in it; so, too, Australia’s Mitchell Watt, the only man to win a Long Jump medal at each of the 2009 World Championships, the 2011 World Championships and London 2012 Olympic Games.

Add Aleksandr Menkov, Godfrey Mokoena, Ngonidzashe Makusha and Chris Tomlinson and you have a potent mix – even for so early in a championship year.

So it perhaps was not that Li jumped well, not that he jumped 8.34m, but that he jumped farthest on such a stage against such a field that was the surprise. Also, with Liu Xiang out injured and Gong Lijiao being upstaged in the Shot Put by Christina Schwanitz, that China was still able to produce a winner at its home Diamond League meeting.

Even Li saw it a bit that way. “It’s not a surprise,” he said through a translator in the mixed zone. “I expected to jump well.”

“It is definitely my biggest win,” said Li.

Li’s jump was a world lead and missed the Chinese record set by Lao Jianfeng back in 1997 by just six centimetres. It was the best jump by a Chinese athlete since Lao set his national mark 16 years ago, and it ranks Li fourth on the Chinese all-time list. He also missed Mitchell Watt’s meeting record by 10cm.

Watt, for one, was not as shocked as others might have been to see Li win. When he set the 8.44m meeting record two years ago, Watt said, “two Chinese athletes I’d never heard of were second and third.”

In fact, they were second and fifth. Su Xionfeng jumped 8.19m to take second and Zhang Xiaoyi leapt 8.01m for fifth, but the point is made.

China, indeed, has a reasonable record of turning out long jumpers. No superstars as yet, mind you, just a steady line of men around the eight-metre mark, topped by that national record 8.40m.

Saturday must have been quite a difficult day for athlete preparation. For most of the day – and at least the two preceding days – it rained incessantly. Not heavily, but persistently, never quite stopping. On Saturday afternoon it did stop, but then there was a brief, sharp shower just as the meeting got going.

Only four men jumped eight metres – the winner and runner-up, Rutherford with 8.08m and Su with 8.00m exactly.

It was a good competition for a man who entered it “expecting to jump well,” as Li did. He came out of it confident, too. Asked if he was worried he had missed the national record by a narrow margin, Li replied he would get another shot at it in Beijing in a few days.

“I got close to eight metres in 2008 then I got a serious injury,” said Li, pointing to his hamstring. But he was back in 2009, training with his coach, Jian Liu, in the Chinese capital. And, of course, the following year he was fourth at the Continental Cup in Split, jumping just short of eight metres.

Having broken through in such a dramatic way here, what is next for Li Jinzhe?

“I will try to get a medal at the World Championships in Moscow,” he replied.

Others, of course, may emerge by then. Many of the Shanghai field will be in better form in August than they were on Saturday night, but Li has beaten them once on a big stage, so why can’t he do it again?

It will be harder, of course. No more hiding in full view for Li Jinzhe, we suspect. 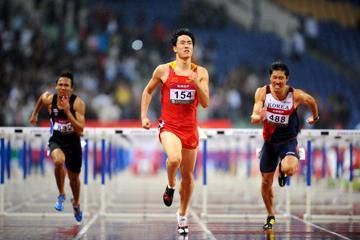 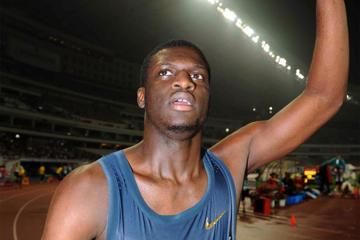