Johannes Vetter joined a select club of javelin throwers when he unleashed his 91.49m throw at the Paavo Nurmi Games, the opening World Athletics Continental Tour Gold meeting of 2020, on Tuesday (11).

The German’s mammoth lob – a world lead and meeting record – means he has surpassed the fabled 90-metre mark for a fourth successive season, something only three men have done before him: Jan Zelezny (6), Aki Parvianian (4) and Andreas Thorkildsen (4). That trio own five Olympic gold medals and five world titles between them. Good company to keep.

“OK, I will move ahead of them next year,” laughs Vetter, 27, when told of his new peers. “But that is stuff I don’t think about … I’m just here to throw. If it’s going far, it’s going far, and that’s fine.”

All fine in Turku, then, when Vetter’s javelin went farther than any has flown for more than two years. Impressively, it came just 48 hours after he had clinched the German title with 87.36m, 1300km away in Braunschweig. A turnaround like that takes its toll.

“Was I worried about how my body would hold up? Definitely,” Vetter says. “I was warming up and my adductor was tired, my calf was tired.

“But sometimes it’s a good thing: I was preparing myself in a good way.”

What a way to kick things off in Turku from @jojo_javelin!

Fresh from winning the German title at the weekend, he wins the @paavonurmigames javelin with a world-leading 91.49m.

Taped up, compressed and smothered in hot cream, Vetter did his work early, notching his winner in round one before backing off. It was “a good decision” to pass his final few throws. “I just want to feel good, to stay healthy.”

For Vetter, the enforced break from competition because of Covid-19, coupled with a first serious injury and personal tragedy,­­ has redoubled his single-minded pursuit of Olympic gold in Tokyo.

“There are many small reasons why I can handle the situation at the moment,” he says. “The last two years have made me a little bit more wise.”

On the morning after the Turku meeting, he describes his body as feeling “totally dead”. He even described it in more graphic terms.

But not as bad as it has been in recent years. His caution in Turku was a product of experience. Vetter’s past two seasons have been hampered by a persistent ankle injury that forced him to receive pain-killing injections before every competition; it caused him to fall short of a dream podium at a home European Championships in Berlin, and surrender his world title in Doha.

Vetter claimed the world title in London in 2017, the same year he elevated himself to second on the all-time javelin rankings with 94.44m. The first year, too, of his current 90-metre run. His 2018 started so well: a 92.70m in Leiria in March. No one threw farther all year. But that summer, at the German Championships, he felt a pang. A bone fragment in his left ankle had come loose, floating freely and causing pain.

“That’s the reason I couldn’t throw that well at the European Championships that year [bruisingly in Berlin], and why I couldn’t do that many comps all last year,” he explains.

But it wasn’t just his physical condition halting his progression.

“My mother died in 2018, in November, with a brain tumour,” he says, the toll of loss visible still. “On the sports side it was so difficult. And on the private side it was more difficult.”

Despite the difficulties, he fought on. His relaxed attitude towards statistics, and easy nature so visible in meeting hotels, belies an intense focus.

The physical pain persisted through 2019. Vetter explains how a biomechanical team calculated that every throw he completes generates more than a ton of force on his left leg. That’s a lot for a busted ankle to handle.

He competed sparingly ahead of his world title defence in Qatar – just four competitions in the six-week lead up. Yet he still registered his customary seasonal ninety-plusser in Minsk with 90.03m, and furthermore hauled himself on to the World Championships podium.

“I had no experience to build up my performance in competitions, and I made third place there,” he recalls. “The best German. And the other guys had the whole season to prepare for Doha. That makes me really proud.” 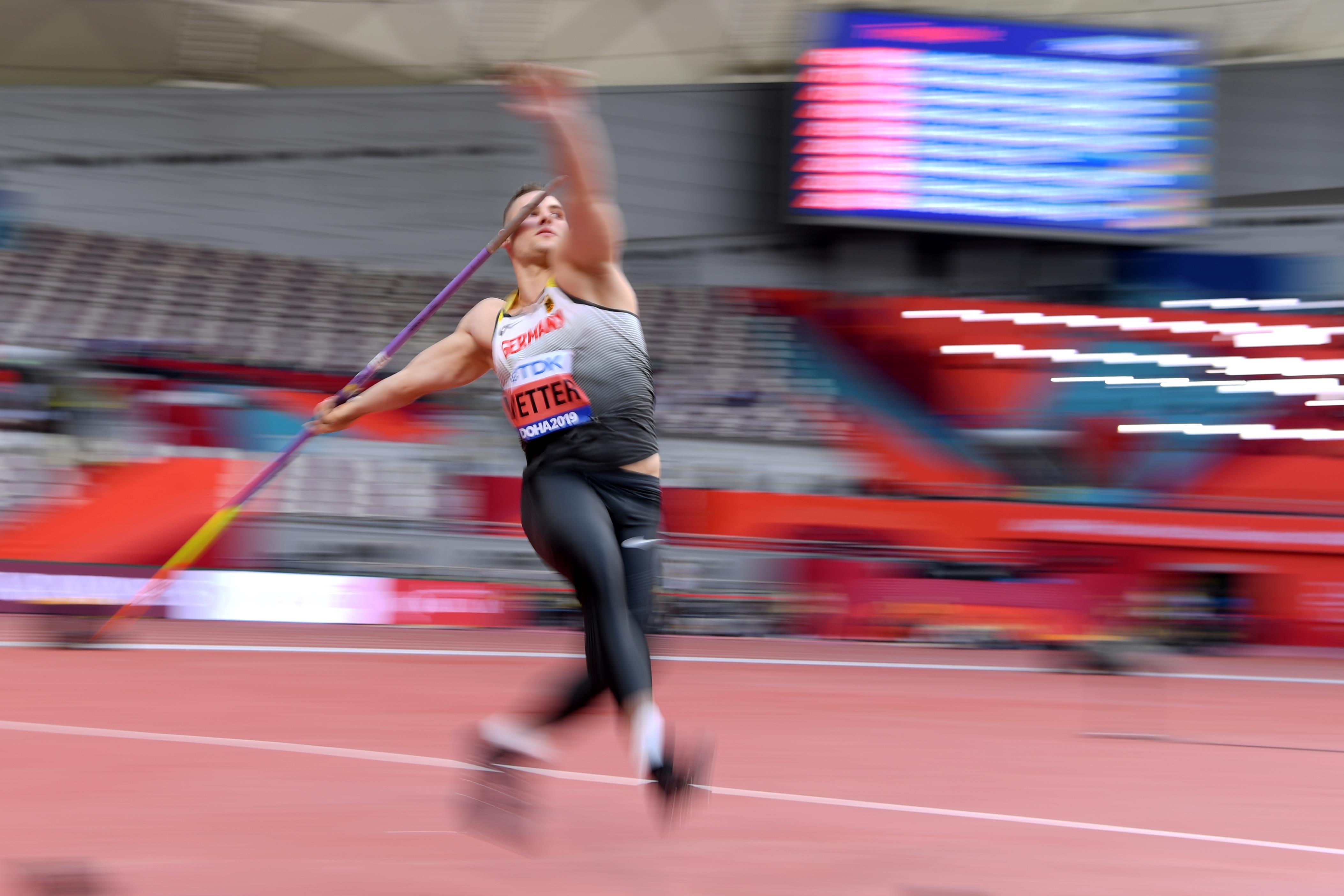 A bronze medal earned, not a gold lost, he insists.

That fighting spirit has persisted through 2020.

Surgery to remove the loose bone, four days after the world championships final, was successful – Vetter shows the video of the procedure with some pride. Training resumed in late November, and although by mid spring the Covid-19 pandemic was cancelling competitions left, right and in Japan, he maintained focus.

“It was like training without reason,” he says. “But I didn’t lose motivation.

“I want to improve. I want to compete. That’s the best experience you get, when you have more and more competitions. So that’s why I was fighting again.”

Although there is clearly some disappointment at the Olympic postponement – he can’t help but point out that the javelin final would have taken place four days prior to Turku – Vetter was moreover frustrated by the stunted global response to the pandemic.

The Turku meeting, where a crowd of 6000 gathered on a balmy Finnish evening, felt surreally normal. But Vetter remains genuinely cautious, unwilling to let his guard down in the fight against Covid.

“I think it’s difficult if it’s getting normal, you know, because the virus is almost there,” he says. “I really want to do some photos with all the other guys, but I’m pretty conscious of what I can’t do. It’s not that I don’t like the people here. I’m really happy that I’m here, that the crowd is here, but you have to keep the distance. It’s the best way of taking care of each other.”

His commitment to being constructive in the fight is why he is neutral about whether a rescheduled Olympic Games can take place with spectators or not.

“For me it would be ok without,” he says. “The Olympics are the Olympics. It was the same with the German Championships, in a ghost stadium.” 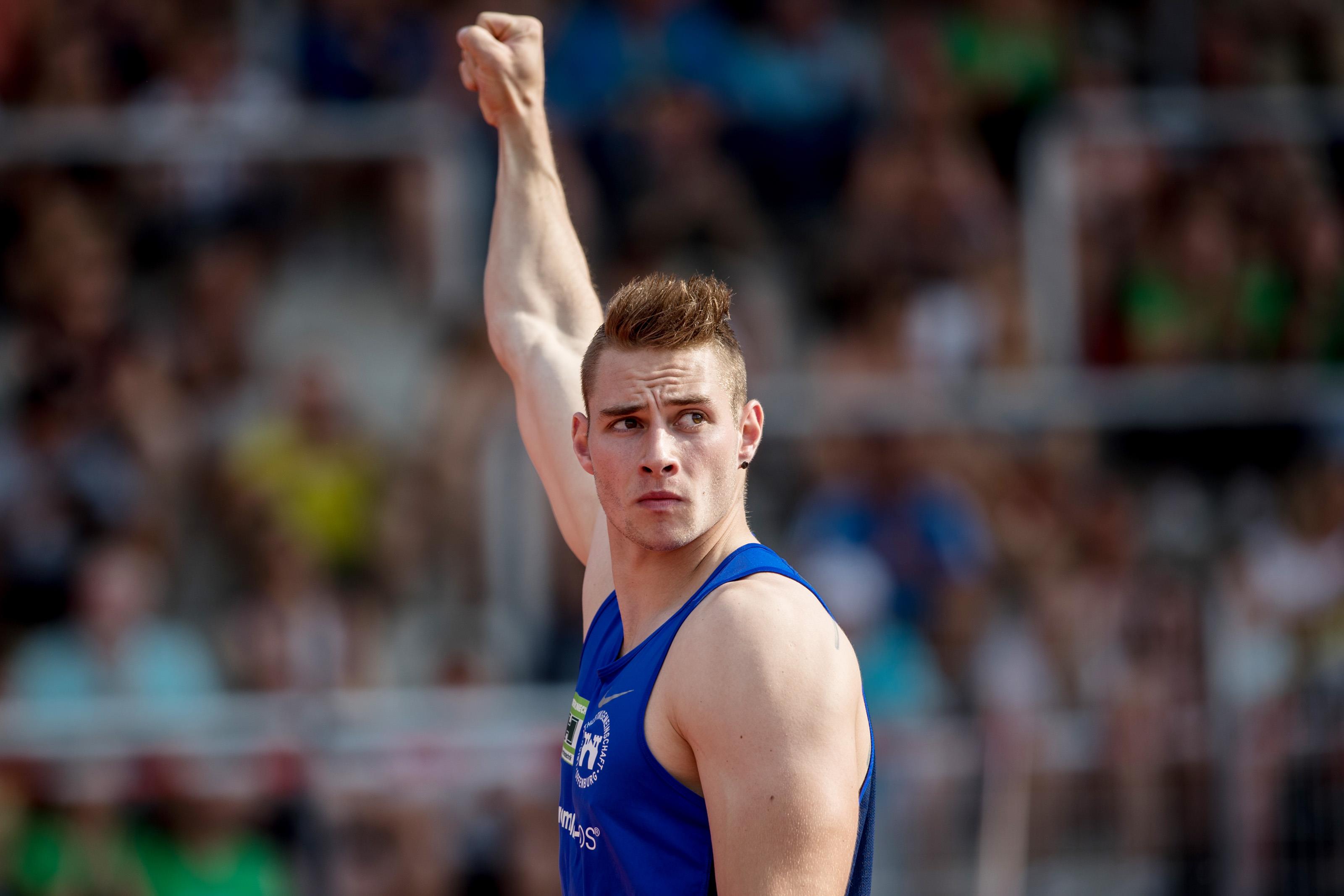 He points to European football’s resumption as an example of how sport can lift the mood, even to a live audience of few. Whatever the atmosphere, he says, elite athletes have to perform.

“Liverpool, Bayern Munich, we have seen some really good games, and they had no spectators … But especially I think a world-class athlete has to handle situations like that. Then you can see the difference between the athletes who can handle that or can’t.”

Vetter wants to prove himself as an athlete who can. His success, despite recent tribulations, provides good evidence.

“That’s the reason why I can handle a situation like [Olympic postponement],” he says. “[I want to] keep going, and maybe show others around the world – especially the youth – that there is one guy who is fighting, who can handle the situation; maybe to also give energy to others, the whole of society. I’m a big fighter. Look at me.”

At the last Olympics, in Rio, Vetter’s compatriot Thomas Rohler claimed the gold. Can we expect another German to top the podium in Tokyo?

“Yeah. It will definitely be me,” he insists.

Even after pondering the surprise world championship win by Anderson Peters last year, and Keshorn Walcott’s shock gold at London 2012, he remains as bold.

“It’s my goal, it’s my dream, and I think I have the best potential of all the javelin throwers around the world.”