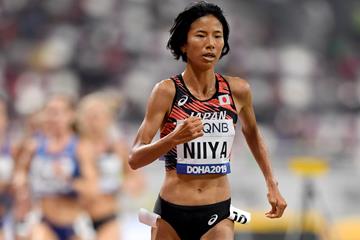 Back from retirement and faster than ever, Niiya fully focused on Tokyo

It is a little hard to fathom, but Hitomi Niiya – potentially one of Japan’s strongest track hopes at the Tokyo 2020 Olympic Games – hates running.

The 32-year-old, who blitzed to a Japanese half-marathon record in Houston and is eyeing up a spot on the 10,000m team for this year’s Olympics, says with a smile that running makes her tired and does not remotely compare with her passion for shopping.

However, what Niiya lacks in enthusiasm for the sport, she certainly makes up for in ability and it is not beyond the realms of possibility that the diminutive athlete could threaten the podium in Tokyo.

Born in the Okayama Prefecture in the south of the island of Honshu, Niiya was inspired to take up running after watching her compatriot Naoko Takahashi win marathon gold at the 2000 Sydney Olympics.

“I did a lot of sports when I was younger,” says Niiya. “My two older brothers played football so I did too, but it was watching Takahashi that inspired me and I joined a club team at junior high school.”

She made quick progress and at the age of 15 her talent was snapped up to attend the Kojyokan High School, one of Japan’s most powerful running schools.

The impact was immediate. At the age of 16 she represented Japan at the 2004 World Cross Country Championships in Brussels. On hilly terrain and thick mud, Niiya performed respectably to finish 19th in the women’s U20 race, helping her country secure team bronze.

However, the Japanese teenager was far from satisfied.

“It was also the first event I’d been to without my coach,” she adds. “The experience taught me I needed to be more independent. Running in Brussels acted as motivation to return to the World Cross and run better.”

She was good to her word. Twelve months later she competed at the 2005 World Cross Country Championships in St Galmier and placed 13th. Later that year she gave more evidence of her exciting potential, earning 3000m bronze at the World U18 Championships in 9:10.34 in Marrakech.

“I didn’t expect to win a medal because the Africans are so strong,” she recalls. “I was very proud. Winning bronze and watching the Japanese flag at the medal ceremony was such a happy memory.”

Another 13th place followed in the U20 race at the 2006 World Cross Country Championships in Fukuoka – where she earned the honour of finishing as the top Japanese runner in front of her passionate home fans – before later that year heading north to Chiba prefecture to take up a professional running contract with Toyota.

Unfortunately, however, Niiya initially struggled to translate her form as a talented age-group athlete into the senior ranks.

At the age of 18 she made an ill-conceived marathon debut, recording 2:31 in Tokyo – a move she immediately regretted.

In 2010 she made her senior debut at the World Cross Country Championships in Bydgoszcz, placing 31st. But in 2011, after switching corporations to join Universal Entertainment and given greater autonomy over her training, the move yielded instant results.

Implementing a higher intensity training programme, she carved out more than 10 seconds from her 5000m PB to record 15:13.12 and secure qualification for the Japanese team at the World Championships in Daegu.

There Niiya successfully navigated a route through the heats and finished 13th in the final. She was still wracked with self-doubt, though. “I did not want to make the final,” she recalls. “I did not believe I had the ability to perform at that level.”

Although thrilled to represent her country at an Olympic Games and post a pair of PBs, she was not wholly satisfied.

“My goal was to finish top eight in the 10,000m final, but I placed ninth with quite a big gap (more than three-and-a-half seconds) to eighth place,” she adds.

Niiya struggled with ongoing plantar fasciitis issues in her foot which required surgery, but she declined an operation and vowed that 2013 would be her last in the sport.

Hitomi Niiya after the 10,000m at the 2013 World Championships in Moscow (Getty Images) © Copyright

Fuelled by the extra motivation that 2013 would be her final season, she summoned an outstanding campaign, climaxing with a PB of 30:56.70 for fifth in the 10,000m at the World Championships in Moscow.

Despite that outstanding display in the Russian capital, she remained true to her word and retired at the age of 25 to take up a role as an office worker in Tokyo.

Niiya enjoyed leading a normal life. She pursued her passion for shopping, hit the Karaoke bars and put on 10kg in weight. Returning to the sport was not a consideration until 2017 when an offer came in from Nike to re-start running.

“Around the same time as that offer, I remember I wanted to buy a bag,” she explains. “I’m not too good with money, I don’t keep a lot to myself because otherwise I’d spend it, so I often ask my mother to keep my money. So that’s when I thought, ‘if I sign the contract it will enable me to buy the bag’.”

She connected with former Japanese 800m international and 2012 Olympian Masato Yokota and enlisted him as her coach. Despite four years away from the sport, it did not take long for Niiya to regain her physical shape.

Successfully managing the ongoing plantar fasciitis injury with regular physiotherapy, she made her first competitive appearance in five years in 2018 when running 9:20.74 to finish second in the 3000m at the Nittai University Time Trials meeting on 9 June. She followed it one month later with a 15:35.19 clocking over 5000m in Fukagawa and ended the year with a 31:32.50 10,000m victory at the Zatopek:10 meeting in Melbourne.

The improvements continued last year as Niiya earned 10,000m silver at the Asian Championships before returning to the World Championship fold to place a respectable 11th in the 10,000m (31:12.99) in Doha.

Training at an intensity which she believes puts her on a similar level to the top African athletes, her coach elected to enter Niiya for the Houston Half Marathon in January. Her main intention was to use the event as preparation for her 10,000m ambitions, but she excelled and won the race in 1:06:38 to carve 48 seconds from the Japanese record set by Kayoko Fukushi in 2006.

“My aim was to break the national record and I was really pleased to do so,” she adds.

She underlined her excellent form last month by posting a 5000m PB en route to victory on a windy Auckland evening in 15:07.02 and now the 32-year-old is switching her thoughts to the Japanese Trials, where a top-three spot in the 10,000m will book her place on the team for the Tokyo Olympics.

“My hope is to make the Olympic team,” she explains. “If I do, I will feel a lot of responsibility for a good result. The aim is to win a medal for all the people who have supported me, from my coach, my sponsors and all the people in my life.”