When Edgar Rivera added five centimetres to his high jump PB back in April 2011, it was bittersweet.

The Mexican was obviously delighted to produce a lifetime best of 2.28m, matching the ‘B’ standard for the London 2012 Olympic Games. But his performance came just two weeks before the qualification period started.

Unfortunately for Rivera, he was unable to reproduce that mark within the qualifying period and so missed out on competing at the Olympics.

His brother Luis, meanwhile, booked his place on the team in the long jump, but that only made the situation all the more devastating for Rivera, knowing that he had missed out on the opportunity of making his Olympic debut alongside his older brother.

One year later, the brothers both represented Mexico at the IAAF World Championships Moscow 2013. Rivera missed out on making the high jump final while Luis took bronze in the long jump.

Luis, who earlier that year had won the World University Games title with a national record of 8.46m, ended the year as Mexico’s top track and field athlete.

Fast forward a few years, though, and it’s now Rivera who has secured an Olympic qualifying mark while his brother is on the comeback trail.

At an indoor competition in the Czech city of Brno earlier this year, Rivera won with a Mexican indoor record of 2.30m, exceeding the Olympic qualification standard by one centimetre.

“This isn’t the end of my journey,” he said after the competition. “This is the start of it.”

In truth, the journey began in January 2015 when he travelled 5,500 miles across the Atlantic from his home in Monterrey to Cologne so that he could train at the World High Jump Centre, an IAAF accredited centre.

Just four months prior, he had won the Ibero-American title with a leap of 2.28m, equalling his personal best for the second time. Remembering how he had narrowly missed out on Olympic qualification leading up to the previous Games, Rivera knew that he needed to do something drastic to progress to the next level.

He took a bit of time to settle into his new environment in 2015, but Rivera is now beginning to reap the benefits.

“Having the chance to practice with such a great team and working hard every day makes me feel like I am on a long training camp,” said Rivera, who is coached in Cologne by Wolfgang Ritzdorf. “In training camps you can focus on the training aspect while taking the appropriate rehab, so being in this environment helps me to stay focused. Being in Germany is also great once the season starts as so many major athletics events are staged in Europe, so we always have competitions to take part in.

“Life in Germany is of course different,” adds the 25-year-old. “There are cultural and language barriers, so at the beginning it is always a process of adaptation and getting to know your surroundings until you can feel comfortable.

“Also it is far away from home so you get homesick at times, but technology is good these days to help stay in touch. Plus I am doing what I enjoy the most and following my dreams here so I know I am in the right place.”

Rivera’s training group in Cologne is a truly global one. He trains alongside Fernand Djoumessi of Cameroon, Ali Mohamed Younes Idris of Sudan, and Luis Castro of Puerto Rico, all of whom are national record-holders.

“We have a great team here,” said Rivera, the first member of the group to achieve the qualifying standard for Rio. “We have learnt to grow as a team and help each other out. We push each other and share tips to improve as jumpers.

“It’s usually better to train with a team,” he added. “When your team is good and you trust in the coach’s work, you just know and believe things will work out.”

From Mexico or Germany, all roads lead to Rio

Four years on from the last Olympics, both of the Rivera brothers are in an unfamiliar situation.

Edgar has all but guaranteed his place on the team, while Luis is trying to regain his eight-metre form, having missed the second half of the 2015 season with a leg injury.

Now fully recovered, Luis recently opened his outdoor season in California with a leap of 7.98m, one of his best summer debut jumps to date. The 28-year-old will need to find another 17 centimetres to achieve the Olympic standard.

Not only would that be a huge relied for Luis, having rehabbed his way back to fitness, but it would also be a huge boost for Edgar, who has looked up to his older brother all of his life.

“It was a big inspiration seeing him compete at such a great level and proving we are capable of being at the top,” Edgar said of Luis. “We tend to complain that we do not have the same conditions, supplements, knowledge or right equipment to match the best athletes in the world. But I have seen how he has prepared. We started in athletics about the same time, and I know he has been working hard and he has had struggles on the way. That made me aware that I can do it too, we must just keep fighting and believe in ourselves.

“Since London 2012, we had this idea in our mind and now we can make it a reality,” he added. “I am confident of our chances. For us, being able to have two members of the family at the Olympics and performing at our best will be like a dream coming true.”

BACK
Pages related to this articleAthletes
Edgar RIVERA 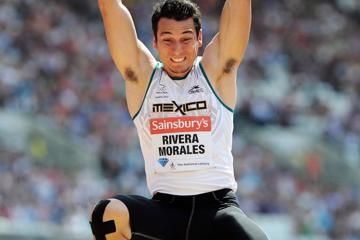 Rivera is jumping to achieve his dream...