Keeping relaxed is key to world U20 discus champion Emilianov

While most athletes --especially in an event as individual and as technically demanding as the discus-- adopt a veneer of inscrutability which is maintained until after they leave the competition arena, Moldova’s Alexandra Emilianov wears her heart on her sleeve.

In between throws in the discus final at the IAAF World U20 Championships Tampere 2018, Emilianov was garrulous with her fellow competitors, broke into a beaming smile whenever she was on camera and was even seen dancing to the music playing around the arena.

Some athletes wouldn’t even notice the music let alone tell you which song was playing on the sound system when they are in competition mode but this is not to say Emilianov is lacking in focus and concentration. In fact, staying relaxed is key to her success.

“When I feel pressure, I begin to think about everything --and I know I can do it but then I can’t do it-- but when I just enjoy myself, have fun and dance, it’s great. When you dance, you don’t think about competition and it’s just like practice for you. Everybody has experience and right now I’m double world champion.”

“I was a little disappointed with the result,” said Emilianov, reflecting on her competition two years ago. “But right now, it’s just - I don’t want to say it was an easy victory but the throws felt easy.”

One explanation for this could be the fact Emilianov only chose to contest one event in Tampere. Emilianov has won countless national, regional and continental accolades in the shot put --including the Balkan U20 title last month-- but rather than jeopardise her chances by competing in the shot put final the evening before, Emilianov chose to focus solely on one event.

“I do the shot put too but it’s a World Championships so I need to do what I do best. That’s the discus,” she said matter of factly. “Being ranked first was a big responsibility. When you are first, you need to prove that you’re first. If someone beats you, people begin to say you are not so good. You can’t prove yourself but I made it and I’m happy.”

Emilianov’s competition record speaks for itself but just as impressive is the fact the Moldovan, who only turns 19 in September, gave up her creature comforts for the chance to train and study in the United States last year at such a young age. Emilianov, whose formative years in the sport were guided by Moldovan Olympian and family friend Vadim Hranovschi, is now studying at the University of Kansas where she has settled both on the track and away from it.

“It was a big move - 9000 kilometres from home,” said Emilianov, who only started to learn English three years ago but now speaks the language fluently with an American twang. “My parents miss me a lot and it’s a big step for me but I already have friends there and they love me --they say they love me-- you need to experience new things in your life. You can’t just stay in your country and think you can be best in your country - you should be the best in the world.

“I like to travel and I don’t feel uncomfortable. If I make friends, I’m good everywhere! It depends on the people around me.”

The athletics roster includes a geographically diverse bunch of throwers, including fellow 2015 world U18 discus medallist George Evans from Great Britain and Belarus’ near 80-metre hammer thrower Gleb Dudarev among others. Emilianov is clearly thriving in this environment, recently breaking the 60-metre mark for the first time in her burgeoning career at the age of 18.

“I need to practice in the morning - after that I have class and after that I have practice again. It’s a little bit challenging but I hope I’m doing great because I did my PR in Kansas,” said Emilianov who qualified for the European Championships with that effort.

At 18, Emilianov might not threaten the medals when she makes her senior international debut next month but the experience still promises to be a worthwhile one in terms of her career development - especially if she crosses paths with one particular athlete in the German capital.

“I hope I will see Sandra Perkovic there because I like her - she’s my idol,” she said. “Once I talked with her over the internet and she told me she saw how I compete and I was so happy and then for maybe three days I was talking just about her to everyone!” 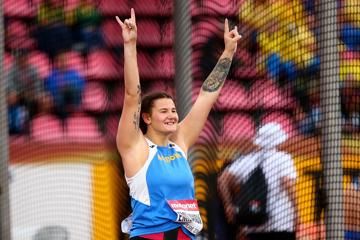