While Bashir got the better of Uganda’s Mande Bushendich in 27:47, Tola beat Kenya’s world marathon champion Ruth Chepngetich by seven seconds, winning in 30:50. The downhill nature of the course means times achieved here are not valid for PB or record purposes.

On a pleasant windless night with the thermometer reaching 9C, the race kicked off at a moderate pace as a 10-man pack covered the opening kilometre in 2:48. Spain’s Toni Abadía moved to the front and opened a 30-metre gap by the second kilometre; shortly afterwards Jesús Ramos joined Abadía in the lead and the local pair went through three kilometres in 8:04.

The main favourites were about 40 metres behind, led by Turkey’s Aras Kaya, the Ugandan trio of Moses Kurong, Boniface Sikowo and last year’s third-place finisher Bushendich plus Bashir Abdi.

The Spaniards’ lead was to be short lived and before reaching the halfway point (13:30) they were caught by the chasing group with Kurong making most of the pacing duties. The key movement came with the clock reading 19:00 when Abdi broke away from the heading pack to build a two-second advantage on Bushendich and five over Abadía with 2.5km to go.

Abdi, the European 10,000m silver medallist, who had remained in the middle of the leading group for the first half of the race, proved to be in fine form over the tough final stages. At the tape, the Belgian was timed at 27:47, his first ever sub-28-minute clocking on the roads, while Bushendich finished in 27:51. Abadía managed the fastest ever time by a Spaniard here with 27:56, some consolation for recording his fourth third-place finish in Madrid.

“After competing at the Chicago Marathon (where he set a Belgian record of 2:06:14), I rested for several weeks but then I resumed training and I felt good today,” said Abdi, who was born in Somalia but fled the country at the age of 12. “The closing two kilometres were very tough but I reserved my energy in the first half and the tactic paid off.

“This year I have broken the Belgian record twice (2:07:03 in London and 2:06:14 in Chicago) and I would like to get close to the European record (2:04:16) in some of my next outings over the distance,” said Abdi, who will run a half marathon in the Netherlands on 12 January before contesting the Tokyo Marathon in March. “I would like to compete at the Tokyo Olympics, but also understand the decision to move the road events venue to Sapporo due to the weather conditions.”

Sandwiched between a large pack of men, the two women were evenly matched for the first three kilometres which they covered in 8:56, clearly ahead of Portugal’s Carla Salomé Rocha (9:20) and Uganda’s late addition to the field Juliet Chekwel (9:24),

Chepngetich, who had declared at the pre-race press conference that she was not yet in the same kind of form which led her to the gold medal in Doha, could not follow in the Ethiopian’s footsteps before reaching halfway (14:50 vs 14:54); by then Rocha kept her four-second margin on the Ugandan (15:29/15:33).

In the second half, 25-year-old Tola managed to extend her lead to eight seconds with about two kilometres to go while Rocha also widened her advantage on Chekwel to another eight seconds.

Tola confirmed her supremacy during the uphill closing section and romped home in 30:50, the fourth fastest time ever recorded at this race. Meanwhile, Rocha completed the podium more than a minute behind the winner (31:52) but 21 seconds clear of Chekwel.

“I have beaten the recent world champion and that’s great for me,” said Tola, who is based in Geneva where she is coached by Tesfaye Eticha. “I feel in great shape and look forward to running under 2:20 in Tokyo in March.”

Kandie comes from behind to win in Sao Paulo

Kandie and Kiplimo broke away from the other three men in the lead pack just after the half-way stage. Just before the climb up Brigadeiro Luis Antônio Avenue, Kiplimo took advantage and entered Paulista Avenue – less than 700 metres from the finish line – with a comfortable lead, seemingly destined to become the first Ugandan winner of the race.

But Kandie started kicking hard in the final 40 metres of the race and overtook Kiplimo just before the line, stopping the clock at 42:59 to win by one second. Both men finished well inside the previous course record of 43:15 that had been set by Paul Tergat back in 1995.

Kosgei, contesting her first race since clocking a marathon world record of 2:14:04 (pending ratification) in Chicago in October, lived up to her status as the pre-race favourite in the women’s contest.

Compatriot Pauline Kamulu tried sticking with Kosgei in the early stages, but it didn’t last long as the 25-year-old already had a clear lead at the five-kilometre mark.

By the time she reached the uphill section of the race, her opponents were no longer in sight. Realising that she wasn’t far off course record schedule, Kosgei increased her pace in the closing stages but ultimately finished just shy of the mark in 48:54. She became just the third woman in the event’s history to complete the course within 49 minutes.

A leading group formed by Bekele, Kipruto, Chemutai, Crippa, Faniel and Ethiopia’s Mohammed Abdilmana took the lead in the early stages of the race. They ran at a conservative pace, clocking 3:31 for both the first and second laps. Faniel took the initiative and moved to the front at the end of the third lap with 10:44 on the clock.

The leading pack was whittled down to five runners during the fifth lap. Bekele, Faniel and Kipruto broke away from Crippa and Chemutai with two laps to go and went through the sixth lap mark in 21:23. Faniel went to the lead and only Bekele managed to keep up with the Italian, while Kipruto was dropped by three seconds.

Bekele, who clocked a world-leading 12:52.98 for 5000m in Rome earlier in 2019, launched his attack during the last lap, but Faniel caught up with the Ethiopian and broke away by unleashing his final kick with 200 metres to go near the Fountain of Frogs. He crossed the finish line in Walther Square in 28:21, improving his previous career best over this distance by three seconds.

Faniel finished fifth in the marathon at the European Championships in 2018 and 15th at the World Championships in Doha. Earlier this year the 27-year-old improved his half marathon PB to 1:00:53 in Padua. Born in Eritrea but living in Italy since 2004, Faniel is coached by Italian former marathon runner Ruggero Pertile.

“I knew that I could run a good race, but I was not sure that I would be able to win against such great athletes,” said Faniel. “I am now training hard in preparation for the Seville Marathon in February.”

They went through the first lap in 3:43 and the second lap in 7:42. Gudeta, Kipkemboi and Kite pulled away from Cherono during the third lap and clocked 11:39 at the bell.

Gudeta and Kipkemboi stepped up the pace and were neck and neck race during the final lap. Kipkemboi launched her final kick with 200 metres to go and held on to take the win in 15:30, equalling the course record set by her compatriot Agnes Tirop in 2017. In a close finish, Gudeta was just one second behind with Kite a further second in arrears.

“It was my second time in Bolzano and I was well prepared as I am familiar with the course,” said Kipkemboi, who intends on contesting some cross-country races over the next few months. “It was a fast race and I am happy that I managed to beat Gudeta.”

BACK
Pages related to this articleAthletes
Bashir ABDI 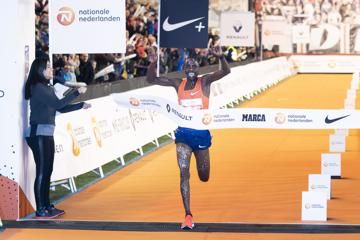