Felix, Camacho-Quinn and Tomala among Olympic stars in action in Silesia

Twenty-two medallists from the Tokyo Olympic Games are set to illuminate the Orlen Janusz Kusocinski Memorial meeting at the Stadion Slaski in Chorzow, Silesia, in Poland on Sunday (5).

None more so than the most decorated female athlete in Olympic and World Championships history: Allyson Felix. The US track icon is making her second World Athletics Continental Tour Gold meeting appearance following her outing at the Golden Spike in Ostrava on 31 May where she was second over 200m in 22.78.

The ageless sprinter will race over 400m in Chorzow, the distance at which she earned bronze in Tokyo last summer and silver in Rio in 2016.

It is a race that is sure to ignite the crowd, with the US legend pitched against the Polish quartet who were members of the gold medal winning mixed 4x400m team and the silver medal winning women’s 4x400m relay in Tokyo last year.  Justyna Swiety-Ersetic, Malgorzata Holub-Kowalik, Natalia Kaczmarek and Iga Baumgart-Witan form the loaded home challenge.

Expectation will be particularly high for Kaczmarek, who set a personal best of 50.16 in Ostrava this week, a European leading time and the fastest run by a Pole since 1977.

In the men’s one-lap race, Poland’s Karol Zalewski, Kajetan Duszynski and Darius Kowaluk – all part of the Polish triumphant mixed 4x400m squad in Tokyo – will take on Lidio Andres Feliz of Dominican Republic, who also picked up Olympic silver in the same event last year, and Michael Cherry of USA, a 4x400m gold medallist and individual 400m fourth-place finisher from Tokyo.

The women’s 100m hurdles is also sure to pique the interest of the crowd. Olympic champion and world leader Jasmine Camacho-Quinn of Puerto Rico will be looking to prolong her hot streak and build on recent victories in Eugene and Ostrava.

Olympic bronze medallist Megan Tapper of Jamaica and fast improving home hope Pia Skrzyszowska will also be in the mix. The Pole will be looking to build on her recent personal best performance of 12.65 from Ostrava where she finished second.

One of the unique attractions of the meet is the appearance of the Olympic 50km race walk champion Dawid Tomala. The Pole is planning an attack on the world best in the one-mile race walk, currently held by Tom Bosworth with 5:31:08 set in 2017.

“I have always dreamed of race walking making it to the Silesian Stadium, the heart of Polish athletics,” Tomala said. “My family, friends and all fans will be able to see me compete live. It is wonderful promotion for our event, something I have dreamed about for years. My Olympic gold certainly helped in making this competition possible.

“I have been thinking of this world record, or of breaking it, ever since it was set by Tom Bosworth in 2017. I strongly believe it can be broken. I hope it will be a strong field. Whenever I am in a competitive situation, the motivation and adrenaline level go up.”

Polish Olympic heroes will also be prevalent on the in-field, particularly in the hammer events where Olympic champions Anita Włodarczyk and Wojciech Nowicki are in the women’s and men’s start lists.

They will be joined by Polish teammates Pawel Fajdek and Malwina Kopron, both bronze medallists from Tokyo.

The men’s shot is another event topped up with Olympic quality. Olympic silver and bronze medallists Joe Kovacs of USA and Tom Walsh of New Zealand head the field.

Olympic silver medallist Chris Nilsen heads a cosmopolitan field packed with championship pedigree in the men’s pole vault. The home challenge will be led by multiple world medallist Piotr Lisek and 2011 world champion Pawel Wojciechowski. 2012 Olympic champion Renaud Lavillenie of France won at this meeting last year and will be looking to spark his season into life this year.

Other events worth keeping a keen eye on are the women’s 100m, where 2019 European indoor 60m champion Ewa Swoboda carries home hopes, and the women’s 800m where Olympic fourth placer Jemma Reekie of Great Britain & Northern Ireland is the leading contender.

The action gets underway at 14:45 (CEST). Entry is free to the stadium which is known locally as the ‘Witches’ Cauldron’. 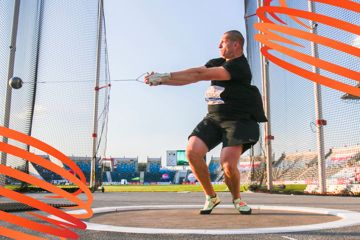 Nowicki and Wlodarczyk victorious in Bydgoszc...