“Firstly, last month Swansea City – the football club I played for as a youngster – won the Capital One Cup at Wembley, which was a game I attended.

“Secondly, Wales also retained their Six Nations rugby union title in style at the weekend with a record-breaking 30-3 defeat against England.

“Welsh sport is on a real high at the moment. We have always punched above our weight in terms of our sporting achievements and I only hope I can play some small part in continuing this trend in August when  I hope to defend my World 400m Hurdles title in Moscow.

“Since my last diary, I’m glad to report the winter has gone very well. I’ve never trained at such a volume and I’ve only missed one’s week training, which was back in January and was due to a sore hip.

“Compare that with last year, when I had a knee operation, missed three weeks in the autumn, and when I did finally get back, I couldn’t put in the work that I wanted to for the summer season.

“In the gym, I’ve set new PB’s for power cleans and squats while my one and only indoor outing this winter in Glasgow proves that my endurance is coming together nicely.

“It was never my intention to do a full indoor season and I wasn’t interested in running any 400s because to perform well in that event I would have had to adjust my training. Yet when I had the opportunity to race over 600m, I was only too happy to give it a go as it meant I wouldn’t have to alter my training and I could get a good track work out.

“I managed to finish second (behind USA’s Duane Solomon) in a new British record of 1:16.22. If you had offered me that time before the race I would have taken it!

“Much was made of the showdown with my British team mate and Olympic 800m finalist Andrew Osagie and it was nice to beat him. I have a lot of respect for Andrew and, to be fair to him, he probably lacked the sharpness at that time of the season to run a really fast 600m but was a great match up. It is a pity we don’t have more like them. I think they really create more interest in the sport.

“Where this winter has been tough is because of the cold and wet conditions we have had to cope with in the UK.

“Many of the training sessions have taken place in horrible weather and I’ve adopted an attitude of not getting too concerned if I’m two seconds slower on my reps some days because the weather has played a large part in that.

“Thankfully, the weather is slowly improving. In April, I’ll be travelling out to Florida for a month of training in the sun and that is when I’ll sit down with my coach, Malcolm (Arnold), and we’ll decide on my racing schedule for the summer months. I hope to compete in some of the early Diamond League meetings, but it will only be during April that we’ll decide whether to start out in May or a little bit later in June.

“The European Team Championships in June are another target. This year they take place in Britain (Gateshead). Having won the 400m Hurdles three times before, in 2009, 2010 and 2011, I’ll be definitely out to win it for a fourth time in a row.

“Yet the main priority remains the World Championships in Moscow. I’ve not allowed too many thoughts to creep in about the event just yet, as we are still four to five months away from it starting.

“Let’s just say that I’ve never felt this strong or this good at this stage of the season before. The pain and disappointment of 2012 is now behind me and I’m feeling like a normal healthy athlete again, which is very exciting.”

BACK
Pages related to this articleAthletes
David GREENE 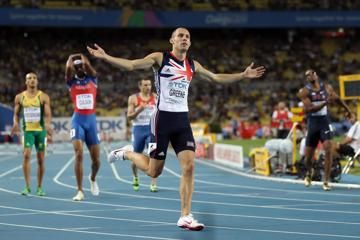 London disappointment behind him, Greene now ... 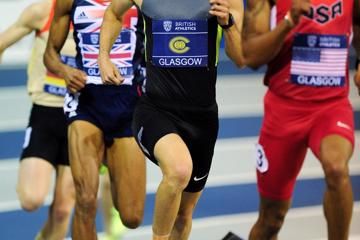