Portugal claimed the single Super League promotion place at the European Athletics Team Championships First League in Sandnes, Norway – home to the fabulous Ingebrigtsen brothers – despite winning only four of the 40 events over three days.

The hosts, with Team Ingebrigtsen playing a central role at the stadium that is just a few hundred metres from their family home, won nine events in all despite the lack of world and European 400m hurdles champion Karsten Warholm, a late withdrawal with illness, but had to settle for third place on 269 points.

Belarus, who totalled seven victories - six of them on a final day charge - finished second on 281 as Portugal, hugely consistent despite the lack of glorious victories, totalled 302.

At the other end of things Ireland’s performance in the concluding men’s 4x400 relay lifted them out of the four relegation places by just one and a half points, with Romania, Hungary, Slovak Republic and Lithuania dropping down as EA streamlines its competition to eight-team leagues.

Ireland won the A final, with Harry Purcell holding off fast-finishing individual and IAAF World U20 champion Jonathan Sacoor to clock 3:08.83 ahead of the Belgian’s 3:08.96.

Hungary, on 217 points, had an opportunity to shake the relegation picture one last time with a good performance in the B race. In the event, although Turkey and The Netherlands bettered the Irish time, Hungary, in third place, did not run sufficiently fast to alter their – or anyone else’s – fate.

Russia, due to their suspension from competition, were already bound for League Two.

One of Portugal’s four winners, the 2013 and 2015 world triple jump silver medallist Pedro Pablo Pichardo, earned the award for the outstanding male performance after his effort of 16.98m.

The female award went to Nadine Visser of The Netherlands, who won the women’s 100m hurdles, one of the most competitive events on the programme, clocking 12.98 into a 1.1 m/s headwind.

The European indoor champion got away best, knowing that her opponents in the next two lanes – European champion Elvira Herman of Belarus and home runner Isabel Pedersen, who has run 12.72 – would be coming back at her, and retained her form to finish well clear of Herman, second in 13.15.

Despite periods of driving rain, the scenic hilltop stadium, surrounded by pines, was virtually full on Saturday as Filip and Jakob Ingebrigtsen delivered expected wins in the men’s 1500 and 5000m.

His 18-year-old brother, a double gold medallist at last year’s European Championships, completed victory in similar fashion in the men’s 1500m, breaking clear with a lap and a half to go and coming home to expected adulation in 3:43.43.

“To win here is very special,” Jakob said. “And I have to say that, for so many people to choose to come here today, in real Sandnes weather – that is really something!”

But elder brother Henrik, who set a national 3000m record of 7:36.85 at Oslo in June, was unable to complete the family treble on home territory today. After failing to break clear on the final lap he finished second in 8:09.72 behind Belgium’s Isaac Kimeli, who clocked 8:09.09.

And today four others upped their game in the home cause.

The spirit of the home team was epitomised by Tom Erling Kårbø n the men’s 3000m steeplechase. The 30-year-old, 11th at last year’s European Championships, went for home 500 metres from the end, establishing a 20 metres lead at the bell but then, to the consternation of home supporters, suffering a clattering fall over the barrier on the bend. By the time he got up, after a full somersault, his lead was less than 10 metres but he charged on, eventually winning in 8:52.00.

Soon afterwards, Norway’s Ola Isene displaced Belgium’s former world and European silver medallist Philip Milanov from first place in the men’s discus with the last throw of the competition, 64.80m, which was seven centimetres farther than the Belgian’s best.

Belarus, who had earned maximum points on day two through a javelin throw of 61.17m by 2016 European champion Tatsiana Khaladovich, produced an inspired charge on the final day.

Iryna Zhuk got their victory march underway with 4.56m in the opening women’s pole vault, held indoors because of the weather, and Belarus soon received another 11-point maximum in the opening track event of the day as Vitali Parakhonka, fastest in the field with a best of 13.40, won the men’s 110m hurdles in 13.73.

Daryia Barysevich provided a third maximum for Belarus in the 1500m, clocking 4:50.60.

Belarus collected their fourth win of the day as Aliona Dubitskaya threw 18.78m in the women’s shot put.

The fifth Belarus maximum was reaped in the women’s high jump, where Karyna Taranda recorded 1.92m, and her team-mate Nastassia Mironchyk-Ivanova was soon pointing at her team label with pride after a winning long jump of 6.76m. 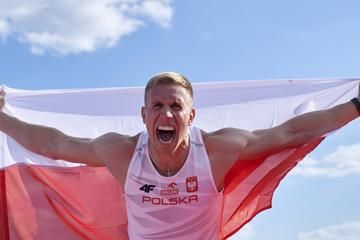