Hellen Obiri continued her strong racing momentum with a sensational 3000m performance to highlight track action at the Doha 2019 IAAF Diamond League meeting in the Qatari capital on Friday (3).

The Kenyan, who took a dramatic victory at the IAAF World Cross Country Championships Aarhus 2019 just over a month ago, waged and ultimately won a fierce last lap battle with 1500m world record holder Genzebe Dibaba en route to an 8:25.60 triumph.

“The final lap was very tough but I've always posted a good result in the final 100 metres," said Obiri, who displayed brute strength over the final 200 metres that belies her tiny frame.

With just over a lap remaining, Obiri blasted past compatriot Gloriah Kite to take command of the race, with Dibaba shadowing in stiff pursuit. But every time the Ethiopian managed to nudge a bit closer, Obiri managed to fight back as she eventually lead the first six finishers across the line in under 8:30. The only other time that has happened was in Doha five years ago in a race that was also won by Obiri.

Lilian Kasait Rengeruk, who ran fifth and sixth for much of the race, finished strong to take third in 8:29.02.

For the tenth consecutive year, Doha kicked off the IAAF Diamond League, a series of the 14 finest one-day athletics competitions on the planet, and with it, the season-long chase for a slice of the $US8 million Diamond League prize pie. Athletes will collect points in the first 12 stops to earn qualification for the two final winner-takes-all meetings to be held in Zurich (29 Aug) and Brussels (6 Sep).

A crowd of some 13,000 gathered at Khalifa Stadium, the venue that will host the IAAF World Athletics Championships Doha 2019 in just under five months time. And they were loud too, with rival Ethiopian and Kenyan camps lining the bends at opposite ends of the track, roaring as their runners came past.

As such, the thunder inside the temperature-controlled stadium was loudest during the middle distance races. One of the loudest roars that blasted through this district of southwest Doha came when Ethiopian Chala Beyo made a move for the lead in the steeplechase with just over 500 metres to go. He led until Hillary Bor took command with just over half a lap to go, which sent the far end of the stadium into a frenzy.

But behind them, Soufiane El Bakkali of Morocco bided his time as he entered the final straight, first passing Beyo at the top of the stretch, and then Bor as he approached the final barrier. He reached the finish in 8:07.22 just after blowing two kisses to the crowd, one to his left and another to his right.

There was fireworks too in the men’s 1500m, which again come down to a homestretch tussle between world champion Elijah Manangoi and training partner Timothy Cheruiyot, last year’s Diamond League champion.

Kenyans took the first seventh spots, rounded out by Manangoi’s younger brother George, the world U18 and U20 champion, who clocked 3:34.00, a personal best.

Strong showings for Asher-Smith and Guliyev

Sprinters Dina Asher-Smith and Ramil Guliyev got their points chases off to impressive starts with solid 200m victories.

Asher-Smith’s performance was especially dominant. Out well from the blocks, the double European champion powered to her lead quickly to enter the straight well clear of the chase pack. She eventually crossed the line in 22.26, by far the quickest debut of her still budding career.

“I didn't know what to expect in my first race of the season but I ran faster than I thought I would so I'm really happy,” the Briton said. “I ran a good race technically and this is a beautiful arena, I'm so glad I came here.”

Jamile Samuel of The Netherlands was a distant second clocking 22.90.

Guliyev’s victory in the men’s race wasn’t quite as lopsided, but it was convincing. The 2017 world champion pulled away from the tight field with about 60 metres remaining to take the win in 19.99, 0.20 clear of Ecuador’s Alex Quinonez.

In the blanket finish behind the Turk, Canada’s Aaron Brown was third in 20.20 and Jereem Richards of Trinidad and Tobago third, another tick back in 20.21.

The men’s 800 was a thriller, another neck-and-neck homestretch war between Emmanuel Korir and Nijel Amos of Botswana. This time, Amos prevailed, pulling ahead of his Kenyan rival in the final 50 metres to take a hard-earned victory in 1:44.29.

Amos, who handed Korir his only loss of 2018 to snatch the African title, shadowed his taller rival for much of the final lap until the pair passed Qatari Abubaker Haydar Abdallah with just over 100 metres to go. As Abdallah faded, Amos made his move.

“I was expecting the win but it was tough out there,” said the winner, who is tied with Sebastian Coe as history's third fastest man at 1:41.73. “Winning my first race of the season gives me a good feeling.”

In the women’s race, world and Olympic champion Caster Semenya pulled away from the pacesetter midway through the back straight en route to a dominant victory in 1:54.98 to smash her own meeting record.

Francine Niyonsaba of Burundi was second in nearly three seconds back in 1:57.75, with Ajee Wilson of the US third, clocking 1:58.83.

Dalilah Muhammad got her season off to a solid start with a convincing victory in the 400m hurdles. Out to a clear lead by the second barrier, the Olympic champion extended it down the back straight, entering the final bend with a massive lead. Despite a slight off balance landing over the ninth hurdle, she held firm to win by more than a second in 53.61, a meeting record and the fastest season’s debut of her career.

“I am happy with the performance here tonight and it is good to have a feel of the tracks for the World Championships,” said the 29-year-old who raced to world silver in 2013 and 2017. “The weather was great and the fans were fantastic.”

Her US compatriot Ashley Spencer closed well to finish second in 54.72, with Anna Ryzhykova of Ukraine third in 54.82.

Danielle Williams, the 2015 world champion, closed well to win the women’s 100m hurdles in 12.66, to notch the evening’s only victory for Jamaica.

Tobi Amusan of Nigeria was second in 12.73, 0.05 ahead of Sharika Nelvis of the US. Brianna McNeal, the Olympic champion, was never in the hunt, finishing a distant seventh in 12.94. 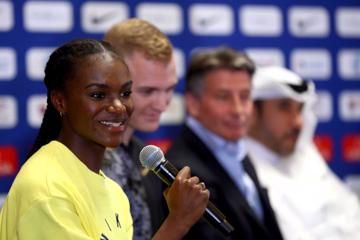 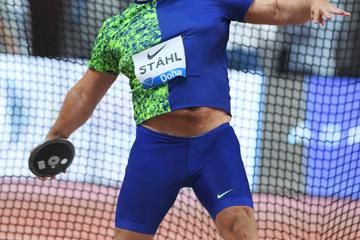