World bronze medallist Moh Ahmed and US champion Shelby Houlihan made significant improvements on the North American 5000m records at a low-key competition at Jesuit High School in Portland on Friday night (10).

Ahmed’s 12:47.20 took more than six seconds off Bernard Lagat’s continental record set back in 2011, while Houlihan’s 14:23.92 was a 10.53-second improvement on her own North American record from two years ago. Runner-up Karissa Schweizer also finished inside the previous continental record, clocking 14:26.34.

Organised by their training group, the Bowerman Track Club, the meet comprised just two 5000m races and the intention for both events was to provide the opportunity for fast times. Steeplechase specialist Colleen Quigley paced the early stages of the women’s race, taking the field through the first 1000m in 2:55.44.

Fellow steeplechaser Courtney Frerichs, the 2017 world silver medallist, took up the running just before 2000m, which was passed in 5:51. Three women – Quigley, Marielle Hall and Gwen Jorgensen – withdrew at the 3000m point. Elise Cranny briefly led at that point, clocking 8:47.88 for her 3000m split, and was just ahead of Houlihan, but Cranny and Frerichs eased off for the final stages of the race, leaving just Houlihan and Schweizer out in front.

Houlihan drifted to the front with three laps to go and gradually started to increase the pace for the final kilometre. Schweizer managed to stick with her training partner until the final lap, which Houlihan covered in 61.4 seconds, giving her a finishing time of 14:23.92. Schweizer was second in 14:26.34.

“I knew Karissa was going to try to come up on me and take the lead, but I decided I was not going to let that happen,” Houlihan told usatf.tv after the race. “I just kept trying to fight her off and tried to have a big kick on the last lap.

“Karissa was in the race in Heusden two years ago where I set the previous record,” added Houlihan. “It’s been really awesome to have her as a training partner and to see how far she has come. She was only three seconds behind me today and I know she’s going to get that 5000m record at some point.”

The men’s race played out in similar fashion, with half the field helping to set the pace for the first 3000m before leaving Ahmed and Lopez Lomong to battle it out for victory.

Ryan Hill (2:36.2) and Grant Fisher (5:12) were the respective leaders for the first and second kilometres as Ahmed and Lomong sat in the middle of the pack. Fisher reached 3000m in 7:46.10, closely followed by Evan Jager and Sean McGorty, but they soon stepped off the track and Ahmed took up the running with three laps to go.

Ahmed then started to wind up the pace and broke away from Lomong on the penultimate lap, which he covered in 59.5. He moved up another gear and ran the final 400m in 57.45 to cross the finish line in 12:47.20, smashing his own Canadian record and moving to 10th on the world all-time list. Lomong, who narrowly missed out on breaking the 13-minute barrier last year with 13:00.13, finished second in a lifetime best of 12:58.78.

“I’m excited, it’s something I’ve been working really, really hard for. It’s been an extremely challenging year, but luckily we have a good group and it was great to deliver this.”

Five months since her last race, world champion Shelly-Ann Fraser-Pryce returned to competitive action at the Velocity Fest meeting in Kingston on Saturday (11).

Despite a stiff -2.2m/s headwind, the two-time Olympic champion won the 100m in 11.00, the fastest time in the world so far this year during this heavily disrupted season. Shashaleee Forbes was a distant second, clocking 11.49.

World long jump champion Tajay Gayle was also back in action following a five-month break from competition. His opening leap of 8.52m was supported by a 4.5m/s following wind and was more than enough to win. He rounded out his series with a wind-legal 8.23m (1.6m/s).

In her first competition since the 2019 World Championships in Doha, 2015 world bronze medallist Alexandra Tavernier broke her own French hammer record in Lyon on Saturday.

The European silver medallist opened with 73.60m and then improved to 74.94m in the second round, adding 10 centimetres to the record she set last year in Chorzow. She went on to record distances of 72.54m and 73.46m in the fifth and sixth rounds.

“I didn’t plan on throwing so far,” she said. “But I expected a good performance after having some good training sessions last week. The conditions were very good; I just wanted to have fun throwing.”

In the Swiss city of Bulle, Ajla Del Ponte produced a pair of back-to-back PBs in the 100m on Saturday. Following some strong performances over 150m in recent weeks, including a PB of 16.67, Del Ponte started her day with an 11.10 (1.5m/s) clocking, taking 0.11 off her PB from 2018. Later on in the final, she reduced that time to 11.08 (0.7m/s), moving her to second on the Swiss all-time list behind world 200m bronze medallist Mujinga Kambundji.

Silvan Wicki – who, like Del Ponte, has also impressed over 150m this year – was more fortunate with the conditions. The men’s 100m was held with a perfect 2.0m/s following wind and Wicki was rewarded with a PB of 10.11, just 0.03 shy off the Swiss record.

BACK
Pages related to this articleAthletes
Mohammed AHMED 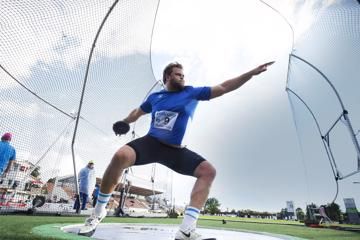 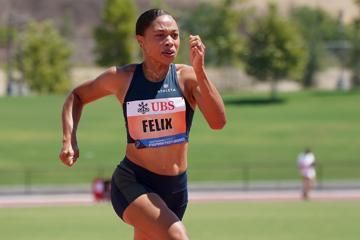