In his debut at the distance, Leonard Komon won the 34th Vattenfall Berlin Half Marathon with the world class time of 59:14, just edging out fellow Kenyan Abraham Cheroben in a sprint finish on Sunday (30).

Komon, 26, missed the world record of 58:23 he had announced he wanted to attack but he still had plenty to celebrate. His time was the best ever by a debutant at the distance, improving the previous best of 59:20, which Kenya’s Moses Mosop ran in Milan four years ago, by six seconds.

Running with a tailwind during the first 10km, a very fast race quickly developed. After passing the 5 km mark in 13:39, a group of four runners - Kenyan pacemaker Vincent Rono leading his compatriots Komon, Cheroben and Daniel Chebii – reached the 10km point in 27:40.

With this split time, the group was on time for a world record but Rono’s pacing duties soon ended and when the group of three turned into Kurfuerstendamm after 11km they ran into a head wind for most of the remaining kilometres.

Chebii could no longer stay with his rivals shortly after 12km but Cheroben showed great courage and the training partner of Komon, with a personal best of 1:00:38 before the race, decided to take the lead.

“I have to thank him for this, because it really helped me,” reflected Komon, after the race.

However, the pace still dropped and the world record was obviously out of reach once the two leaders passed the 15km point in 41:44.

In the final few kilometres it was now not about chasing records but winning.

In a sprint finish Komon, who is the world record holder at 10km and 15km on the roads, just edged out Cheroben although both men were given the same time of 59:14. The course record remains at 58:56, set by Patrick Makau, another Kenya, in 2007.

"I am happy with my performance in my debut race. Of course, I ran longer distances in training, but there is always a difference between training and competition. I thought I would be able to run under 59 minutes. It was a challenge, but at the end there was something missing. But I know what to do and will try to run such a time in my next half marathon," added Komon, who said he also intends to move up to the marathon in the not-to-distant future.

Komon finished ahead of 11 fellow Kenyans. Behind Cheroben, Richard Mengich edged out Sylas Kimutai for third place with both clocking 1:00:17. Chebii followed the leading quartet home in fifth place with 1:00:40.

Ethiopia’s Tadelech Bekele won the women’s race in 1:10:05, pulling away from Kenya’s Agnes Mutune with barely two kilometres to go.

Bekele and Mutune led from the beginning but the pace was not as fast as expected, although she finished eight seconds ahead of Mutune, who was second in 1:10:13.

"I am happy with this win and it is my plan to prepare for a marathon," said Bekele. Running in third position for most of the race, Germany’s Sabrina Mockenhaupt filled the final place on the podium when she came home in 1:11:43.

BACK
Pages related to this articleAthletes
Leonard Patrick Komon 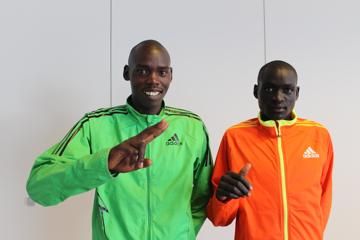 Koech and Ongori prevail in heated battles in... 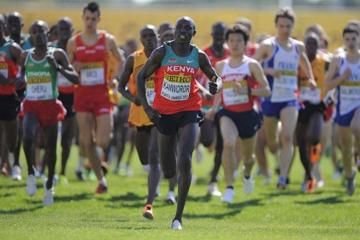 Teenagers triumph at Berlin Half Marathon... 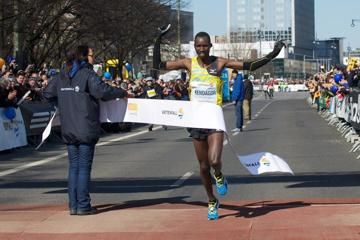