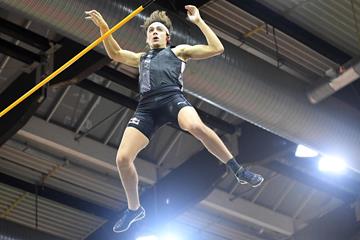 Living up to his star billing, Armand Duplantis came painstakingly close to breaking the world record in the pole vault on Tuesday (4) night at the PSD Meeting Dusseldorf, the third stop on the 2020 World Athletics Indoor Tour.

After early massive clearances at 5.80m, a world-leading 5.90m, a meeting record 5.95m and then his fifth career clearance at 6.00m, Duplantis hoped his momentum would take him where none have traveled before. He had the bar raised to 6.17m, one centimetre better than Renaud Lavillenie's world record set six years ago.

After a solid first attempt, his second was painfully close, the cross bar first nudged slightly with his knee on the way up and brushed by his arm on the way down. Nonetheless it was the best jump of the 20-year-old's career, and one of the finest vaults in history. His last wasn't as good but strong enough to leave the impression that more world record attempts will be in the offing soon.

Was he expecting a near-miss at the world record in his first competition of the season?

"I thought it was possible," he said. "That second attempt at 6.17 was as good as I could have expected.

"Training's been going really well. I feel very fit, very in shape. You don't think that everything's going to be put together in your first meet just because you're physically fit. But it came together. It came together nicely, it came together at a good time. I'm excited about the rest of the season."

Duplantis’s heroics produced one of the evening’s six world-leading performances. The most impressive on the track came in the women's 1500m where Beatrice Chepkoech smashed her own Kenyan national indoor 1500m record.

Bouncing back from a disappointing fourth place finish in Karlsruhe, the 3000m steeplechase world record holder was clearly the dominating force in the race, upping the tempo as she broke away from the pacesetter with three-and-a-half laps to go. Only Axumawit Embaye, the winner in Karlsruhe, gave chase. But Chepkoech was relentless, clicking off nearly identical laps of 32.07 and 32.05 over laps five and six. The seventh, nearly a second quicker at 31.25, cushioned the Kenyan's lead and ultimately put it out of reach.

Her 4:02.09 performance, the fastest in the world this season, clipped 0.12 from the national record she set in Glasgow in 2018. It also took more than two seconds from the meeting record she set that same year.

Embaye's persistence was rewarded with a 4:02.96 season's best for second, earning her enough points to maintain her lead in the Tour standings. Winnie Nanyondo was third in 4:06.13, a national indoor record for Uganda.

Filip Ingebrigtsen's victory in the men's 1500 was even more dominant. Taking the lead with two laps to go, the Norwegian pulled away en route to a 3:36.32 win, another world lead, to keep the Dusseldorf 1500m title in family hands. Last year, his younger brother Jakob took the win. The mark clipped more than two seconds from his previous indoor best of 3:38.62.

Selemon Barega made good on his word to produce a fast race, winning his 3000m face-off with Bethwel Birgen after a gutsy battle over the final lap.

Running in his season's debut, Barega powered past the Kenyan as they entered the straight to take a convincing win in 7:35.71, another world lead, indoor personal best and meet record.

His Ethiopian compatriot Getnet Wale snuck in for second in 7:36.03 with Birgen, the winner in the Boston and Karlsruhe legs, next in 7:36.21, a personal best.

Another step behind, Birhanu Balew of Bahrain was fourth, his 7:38.67 breaking the Asian record.

The first upset of the night came in the men's 800m where world indoor champion Adam Kszczot's streak of seven straight Dusseldorf victories finally came to an end. Fittingly, to local star Marc Reuther, who produced the biggest international win of his career before a hometown crowd.

"Having the crowd behind me really helped push me past Kszczot," the winner said, after a convincing 1:46.13 win.

More accurately, not letting Kszczot past him.

Running in midpack through the first 400m, Kszczot looked to be doing what he does indoors so well: positioning himself for the kill over the final 100 metres. He moved into second with just over 120 metres to go, looking ready to pounce on Reuther as he chased the German around the final bend. But Reuther held him off there and again through the final straight to notch the win.

Reuther returned home after his world leading 1:45.39 in Erfurt two nights ago, so to say he was an underdog wouldn't be quite fair. But holding off a world champion will certainly serve as a confidence booster for the 23-year-old.

Amel Tuka was next in 1:47.29, but behind first section winner Marcin Lewandowski, who clocked 1:47.23 to finish third overall.

Filip Mihaljevic produced the finest indoor competition of his career, dominating the shot put and wrestling the world lead from Tomas Stanek in the process.

Competing in his 2020 debut, the towering Croat threw beyond 21 metres on four of his five measured efforts, capped by a 21.52m effort in the second round to break the national record. He was fairly consistent as well, hitting 21.37m in the second round and 21.43m in the sixth. Mijahalovic, the world indoor bronze medallist in 2016, wasn't far from his 21.84m outdoor best set last year.

Poland's Konrad Bukowiecki was second with 20.92m, just ahead of Stanek, who reached 20.89m in round three.

Christina Clemons, the meeting record holder in the 60m hurdles, defended her turf, sneaking by the field in lane 8 to take the win in 7.91, equalling her season's best. The world indoor silver medallist found herself midpack after three hurdles, but fought back in the waning stages to hold off German Cindy Roleder by 0.03.

Karlsruhe winner Tobi Amusan of Nigeria was third in 7.96. Clemons and Amusan will meet again in Torun on Saturday.

Yaqoub Mohamed Al Youha of Kuwait scored an upset in the men's race, scorching to a 7.54 win, moving up to No. 2 all-time on the Asian lists. Konstantinos Douvalidis was second in 7.61.

Gina Bass and CJ Ujah capped the action on the track with wins in the 60m.

Competing in just her second indoor competition, Bass clocked 7.16 to break her own national indoor record for The Gambia. Ajla del Ponte of Switzerland was a distant second in 7.27, just ahead of Karlsruhe winner Shania Collins, who clocked 7.28.

Ujah equalled his career best of 6.53 to hold off Brandon Carnes of the US who clocked 6.56. European champion Jan Volko was just another tick back in 6.57, equalling his own Slovak national record.

Lisanne De Witte kicked off the main programme with a convincing victory in the 400m. Running in the first section, the Dutch record holder held off Poland's Justyna Swiety-Ersetic, the European champion outdoors, by nearly two-tenths of a second in 52.30, a new indoor personal best, to move atop the Tour standings. The Pole, who was making her indoor debut, clocked 52.49. Lea Sprunger of Switzerland won the second section in 52.50, also a season's best, to finish third.

Neele Eckhardt's second round leap of 14.17m was enough for the victory in the women's triple jump, another world lead and a personal best for the German. Patricia Mamona of Portugal was second with 14.09m.

The World Athletics Indoor Tour resumes with the Orlen Copernicus Cup in Torun, Poland, on Saturday.