Chumo the surprise winner in Houilles

Victor Chumo was perhaps the least-heralded of the contingent of Kenyan runners who stood on the start line, but he produced the best race of his life to come out on top at the 43rd edition of the famous Corrida Pedestre International de Houilles, an IAAF Silver Label Road Race on Sunday (28).

Clearly feeling good despite the chilly conditions which saw most of the leading runners in long-sleeved t-shirts, and many of them in gloves and beanies, Chumo broke away from the leading pack early in the second half of the 10km race with only Eritrea’s 2012 world junior 5000m silver medallist Abrar Osman for company.

After staying on the heels of Chumo for most of the final few kilometres, Osman briefly took the lead about 400 metres from the finish but Chumo responded quickly and found another gear with the finish line in sight about 100m from home to finish in an official personal best of 28:04.

It was the third successive win over 10km on the French roads in his past three races for Chumo, and three times he has reduced his personal best: running 28:16 in Languex in June and 28:12 in Rennes in October.

His performance in Houilles wasn't the quickest 10km he has ever covered, though. When acting as a pacemaker for the 2013 Rome-Ostia Half Marathon, Chumo covered the first 10km in 28:02.

Osman tossed in the towel in the final metres but still finished just one second in arrears, crossing the line in 28:05.

In the duel for third, 2014 Frankfurt Marathon winner Mark Kiptoo showed that there was still a bit of zip in his legs despite now being 37 and held off Ethiopia’s Hailemariam Amare, both men being given the same time of 28:34.

The 2013 winner, Kenya’s Cornelius Kangogo, was not able to put up much of a fight in the defence of his title and came home fifth in 28:38 while three-time winner Micah Kogo, who was also second in 2012 and 2013, this time had to settle for eighth place in 28:53.

She showed good form when winning the Montbeliard half marathon in a personal best of 1:09:12 back in September and set a personal best of 31:34 in the Parisian suburb on Sunday, just five seconds outside the course record set by her compatriot Margaret Wangari Muriuki in 2011.

Jepchirchir was a comfortable winner over Bahrain’s world junior steeplechase champion Ruth Jebet, who was second in 32:18 in the longest official race of her career so far.

Yemenu Tewabech, making her debut in a European race after some promising performances at altitude in her native Ethiopia, was third in 32:20.

BACK
Pages related to this articleAthletes
Mark Kosgei Kiptoo 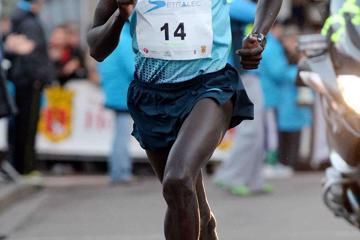