Chepkwony and Bizuayehu win 30th edition of the Venice Marathon

Kenya’s Julius Chepkwony won the 30th edition of the Venice Marathon in 2:11:08, finishing ahead of his compatriots Robert Ndiwa and Emmanuel Sikuku to complete an all-Kenyan podium at the IAAF Silver Label Road Race on Sunday (25).

Inside the San Giuliano’s Park, a vast green area situated about 30 kilometres into the race, Chepkwony, Ndiwa and Sikuku broke away from the rest before Sikuku also quickly found the pace too quick and drifted back.

Chepkwony then surged at 31km, just as the pace was slowing down with the pair crossing the Bridge of Freedom, and Ndiwa was also dropped.

“I saw that the pace was too slow and I decided to push," said Chepkwony. "This is my third win in a marathon after Barcelona in 2012 and Taipei in 2014. I train in Iten and I come from a big family. I have six brothers and two sisters."

Ethiopia’s Ehite Bizuayehu can boast of an even more impressive record than Chepkwony.

Both of the winners have 10 career marathons to their name but Bizuayehu took her tally to six wins after she won a dramatic women’s race in 2:35:19 beating her compatriot Derbe Godana Gebissa by just two seconds after a head-to-head duel over the final few hundred metres.

A trio consisting of the two Ethiopians and Kenya’s Caroline Chepkwony, the latter being the fastest runner in the field with a personal best of 2:27:27, were on their own from just a couple of kilometres into the race, going through halfway in 1:15:31. As the pace dropped in the second half of the race, they stayed together until about 40 kilometres.

Gebissa was the first to launch an attack at 41km as Chepkwony struggled to stay with her two rivals, as the runners crossed St Mark’s Square.

Bizuayehu then responded with an attack of her own and went past her compatriot with the line in sight. Chepkwony hung on to finish third in 2:35:49.

An estimated 8000 runners took part in the marathon itself, over the traditional course from Villa Pisani in Stra, a small town about 25 kilometres from Venice.

Another 4000 runners competed in an associated 10km race and there were also three fmily runs, with a total of 9000 schoolchildren each in San Dona di Piave and Dolo, and another 6000 in Mestre.

BACK
Pages related to this articleAthletes
Julius Chepkwony Rotich 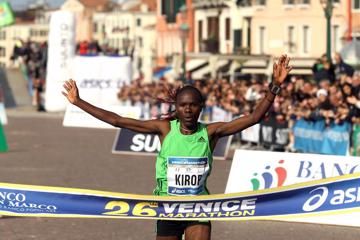 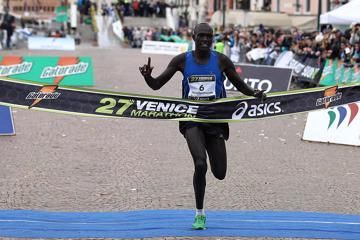 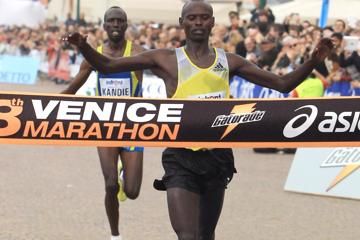 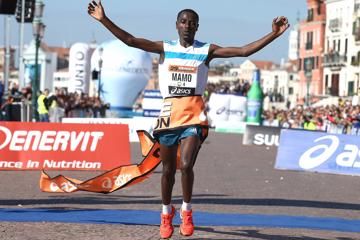