Kenya’s Victor Chumo and Ethiopia’s Ashete Bekere took their respective titles at the eDreams Mitja Marato Barcelona, a World Athletics Gold Label road race, on Sunday (16). On a perfect day for running, the 33-year-old Chumo succeeded after a thrilling sprint finish in 59:58 while Bekere was an overwhelming victor to smash her career best by exactly four minutes to 1:06:37.

Paced by the Kenyan pair of Cornelius Kiplangat and Boniface Kibiwot, the men’s race kicked off at a moderate tempo as the large main group went through the opening 5km in 14:18. The rhythm then heated up over the following kilometres, with the lead pack reaching 10km in 28:04, well on schedule to attack the course record of 59:44 set in 2018. Six men remained in contention: Kenyans Chimo and Moses Koech, Uganda’s Stephen Kissa and Mande Bushendich, and Eritrea’s Abrar Osman and Ethiopia’s Tesfahun Alkanew.

Once the pacesetters dropped out the six athletes took turns with the pacing duties. First Chumo took command, then Osman, the only athlete with sub-60 minute credentials, pushed hard. Even Kissa moved to the front on his first ever try over the distance.

By 15km, the clock was reading a promising 42:24 with six men still battling it out. But the speed decreased a bit over the following kilometres with a 54:14 19km split eliminating any chance of a course record. Over the closing kilometre, Chumo, Koech and Kissa proved to be the strongest and pulled away targeting a sub-one hour run.

Chumo prevailed at the tape in 59:58, clipping five seconds from his previous best with Kissa and Koech next in 1:00:00, an interesting debut for the Ugandan and a career best for the 22-year-old Kenyan by 11 seconds.

“I have been looking for an under 60 minute time for so long so I’m very satisfied with my win and my clocking today,” Chumo said.

Held simultaneously with the men’s race, the women’s contest began conservatively as the four-woman leading group went through the opening five kilometres in 15:51. That pack included pre-race favourite Roza Dereje, her fellow Ethiopians Ashete Bekere and Asnakech Awoke plus Kenya’s Dorcas Kimeli. Always paced by Daniel Feyisa, the quartet passed 10km in 31:32 for a 15:41 5km split, but not fast enough to threaten either the world record or the course record set by Florence Kiplagat in a then world record of 1:05:09. By then, Britain’s Charlotte Arter travelled in fifth (32:390 alongside Ugandan Rachael Chebet while Germany’s Alina Reh ran 22 seconds behind that duo.

After another 15:51 5km section for an overall 47:23 15km split, the big surprise came when Dereje simply could not live with the pace and began to struggle leaving behind any chance of a podium finish. Simultaneously, Bekere, the winner at the last Berlin marathon in a PB of 2:20:14, began to push hard and Kimeli soon lost ground. Awoke managed to keep up with her compatriot for some 1200m, Bekere’s relentless pace proved too fast. She broke from Awoke with three kilometres remaining and finished unchallenged in 1:06:37 for a massive PB. Awoke’s 1:07:04 was also a lifetime best by over three minutes. Kimeli completed the podium six seconds behind Awoke in 1:07:10 also a career best for the Kenyan. As for Dereje, she finished two minutes behind the winner in 1:08:38.

Arter managed to hold off the late challenge by fast-finishing Reh to finish fifth in 1:10:01, seven seconds ahead of the German.

Kipruto and Cheruiyot reign supreme at Guadalajara Half Marathon

Benson Kipruto and Lucy Cheruiyot began their 2020 season on a high note by taking the top honours at the 34th Electrolit Guadalajara Half Marathon, a World Athletics Gold Label road race on Sunday (16), although the course records set one year ago remained intact.

With ideal conditions for long distance running, clear skies and temperatures hovering at 10 C, a pack of over dozen men covered the initial 5km in just under 15 minutes. As they hit the 10km mark in 29:40, it signalled the course record of 1:01:48, set by Kenya’s Mathew Kisorio last year, would be hard to beat.

Barrios remained with the three Kenyans at 15km, but Kimutai left Kipruto soon after. As they entered the home stretch, Kimutai moved to the front but Kipruto bided his time and launched his sprint in the last 20 metres to secure the victory in 1:02:13, a personal best over the distance for the 2019 Toronto Marathon champion. Barrios completed the podium with 1:02:27 as he prepares for the London Marathon.

In the women’s race, a Kenyan quartet soon made a statement as they moved to the front in the first kilometres. Cheruiyot was joined by her countrywomen Winfridah Moraa, Margaret Agai, Visiline Jepkesho and Ethiopia’s Belaynesh Oljira.

The group remained compact until the 15km marker, when Cheruiyot and Oljira moved away for good, setting the stage for a battle to determine the 2020 winner.

Cheruiyot launched her attack in the last 400m, but Oljira could not respond and was content to settle for second. The 23-year old Kenyan crossed the finish line in 1:10:52, four seconds ahead of the Ethiopian. Moraa completed the podium with 1:11:14.

The course and Mexican all-comers’ record of 1:08:53, set by Ethiopia’s Afera Godfay Berha in 2019, remained intact.

Vianey De La Rosa was the first Mexican to cross the finish line in sixth in 1:12:52, her fastest time in four years, guaranteeing a spot on her national team for the World Athletics Half Marathon Championships in Gdynia, Poland, on 29 March.

The 34th edition of the race, powered by Granvita, drew close to 14,000 runners in celebration of Guadalajara’s 478th anniversary of its foundation.

Beyi clocked a course record 2:07:43 to easily fend off compatriot Hiribo Shano Share who was a distant second in 2:08:41. Mengistu Zelalem Gezahagn clocked 2:08:48 in third to secure an Ethiopian podium sweep. All three notched personal bests. 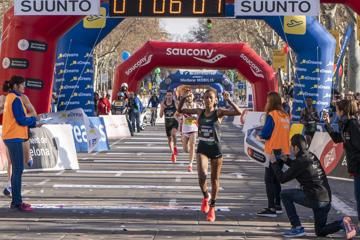 Dereje and Kiptanui take the spoils in Barcel...