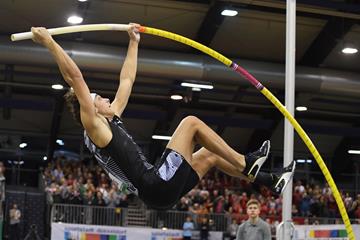 Returning to action, Duplantis commands the spotlight in Torun

Returning to competition just four days after threatening the pole vault world record in in Dusseldorf, Armand Duplantis will command the spotlight when the seven-meeting World Athletics Indoor Tour resumes with the Orlen Copernicus Cup in the northern Polish city of Torun on Saturday (8).

This city of 200,000 is best known as the birthplace of astronomer Nicolaus Copernicus, the famed Renaissance polymath who formulated a model of the universe that revolutionised the way we look at the stars by placing the sun at its centre.

On Saturday, the athletics world's centre of attention will fall firmly on the Torun Arena for the meeting’s sixth edition where Duplantis will continue his efforts to revolutionise how we look at the stars of the men's pole vault.

Last Tuesday night, the 20-year-old Swede become just the 11th man to scale 6.00m indoors, but it was his massive clearance over that height, followed by a near-miss at a would-be world record of 6.17m that may have redefined how we perceive the event's still largely-elusive barrier.

Duplantis said after the competition on Tuesday that everything simply "came together" for him that night. We'll know on Saturday night whether that was a modest assessment of his current form or an effort to temper expectations that six-metre clearances may soon become commonplace - at least by him.

The field is a solid one. With Piotr Lisek out for the indoor season, former world champion Pawel Wojciechowski will carry local hopes. Canada's Shawn Barber, the 2015 world champion and member of the indoor six-metre club, is also entered, as he works his way back from injury.

For the locals, the 800m contest between Adam Kszczot and Marc Reuther of Germany will be the most keenly anticipated race on the track. Kszczot, the world indoor champion, suffered a rare indoor defeat in Dusseldorf to Reuther, who arrives on the Pole's turf armed with the two fastest times in the world this season: 1:45.39 from 2 February and 1:46.13 from Dusseldorf two days later.

The fifth season of the World Athletics Indoor Tour kicked off in Boston on 25 January with the New Balance Indoor Grand Prix, continued with stops in Karlsruhe (31 Jan) and Dusseldorf (4 Feb) in Germany. After Torun, the action-packed 27-day stretch continues with further stops in Glasgow (15 Feb) and Liévin (19 Feb) before the finale in Madrid (21 Feb) where the series winners in 11 point-scoring disciplines will be crowned and awarded their US$20,000 prize bonuses.

Bukowiecki vs Mihaljevic in the shot circle

Including the men's pole vault and 800m, seven of those are on the Torun programme. The men's shot put is another where some of the hottest throwers in the world will butt heads.

Croatia's Filip Mihaljevic dominated in Dusseldorf on Tuesday, reaching a 21.52m world lead and indoor national record. On Wednesday, Poland's Konrad Bukowiecki, who was second in Dusseldorf, wrestled that world lead away with a 21.88m victory in Ostrava. The duo's paths will cross here on Saturday.

Others to watch include another Pole, reigning European indoor and outdoor champion Michal Haratyk, who will be making his eagerly-awaited 2020 debut, and Czech Tomas Stanek, the reigning world indoor bronze medallist, who'll be looking to move up from a third place showing in Dusseldorf and fourth in Ostrava.

Clemons, Ujah and De Witte head the hurdles and sprints

The women's 60m hurdles promises to be a hot affair, with Christina Clemons of the US and Nigerias's Tobi Amusan once again squaring off. The latter won their first meeting of the season, clocking a season's best 7.84, the second fastest performance in the world this year, to beat Clemons into second. But Clemons, who was also second in the Tour opener in Boston, bounced back in Dusseldorf, equalling her 7.91 season's best to take the win, with Amusan third in 7.96. Alina Talay of Belarus has also dipped under eight seconds this season with 7.97 in Paris on 2 February.

Meanwhile, CJ Ujah of Great Britain, the winner in Dusseldorf in 6.53, returns to lead the field here. He'll take on European indoor champion Jan Volko, who equalled his Slovak national record of 6.57 in Dusseldorf where he finished third, and Bryce Robinson of the US, who was fifth in the German meet.

Keep an eye on James Dasaolu, the 2014 European 100m champion, who'll be returning to the track for the first time since 2017. The Briton is on the comeback from a ruptured Achilles tendon suffered in late 2018.

In the women's 400m, Tour leaders Lisanne De Witte (15 pts) and Lea Sprunger (12 pts) meet again after they each ran to victory in their respective heats in Dusseldorf. De Witte was the faster of the two, clocking 52.30 to take maximum points, just ahead of Pole Justyna Swiety-Ersetic who clocked 52.49, a scant 0.01 quicker than Sprunger to finish second overall. She too is in the field.

In the long jump, Karlsruhe winner Marina Bekh-Romanchuk returns to take on Nigeria's Ese Brume and Briton Lorraine Ugen. Bekh-Romanchuk, the world silver medallist last year, sailed a world-leading 6.92m last weekend while Ugen, the world indoor bronze medallist in 2016, has a 6.74 season's best. Brume, who took bronze in Doha behind Bekh-Romanchuk, will be making her indoor debut.

And in the women's 1500m, Axumawit Embaye of Ethiopia returns to the track for the third time in eight days to lead that field. The 25-year-old won in Karlsruhe and finished second in Dusseldorf in 4:02.96, the second fastest time of the year. She'll take on compatriot Lemlem Hailu, the 2017 World U18 champion, who was third in Karlsruhe and the winner in Ostrava.

Off of the scoring programme

Men's races in the 60m hurdles also figure prominently on the programme, albeit not among the scoring events this year.

World indoor champion Andy Pozzi returns to action after his impressive 7.52 season's debut in Paris last Sunday which equalled the fastest in the world this year. He'll take on Aaron Mallett of the US who clocked 7.59 on 18 January and Milan Trajkovic of Cyprus, the 2019 European indoor champion who'll be making his 2020 debut. Jarret Eaton, the 2019 Tour winner, will look to bounce back from an off-day in Dusseldorf where he failed to advance to the final.

Yousef Karam (46.56) of Kuwait and Dutchman Tony Vab Diepen (46.79) are the fastest in the men's 400m field while Karlsruhe winner Shania Collins, the reigning US champion, heads the field in the women's 60m.