Fekadu bids to retain his Beirut Marathon title, and take the course record

There is the distinct prospect of an Ethiopian double victory at 11th edition of the International Beirut Marathon - ‘The Banque du Liban Beirut Marathon’ - on Sunday (10).

Ethiopia’s Kedir Fekadu returns to the IAAF Bronze Label Road Race in the Lebanese capital looking to retain the title he won last year in 2:12:57, a feat achieved by his compatriot Mohammed Temam in 2009 and 2010

With better weather forecast than the rainy conditions which the runners endured 12 months ago, the men’s course record of 2:11:14, set by Fekadu’s compatriot Tariku Jufar in 2011, could be under threat.

However, he is far from the fastest man in the race as former Rotterdam Marathon winner Kenya’s William Kipsang has a personal best of 2:05:49 from when he won in the Dutch city in 2008 although he has not broken 2:14 since that race.

Ethiopia’s Shume Hailu and the Kenyan pair of Sammy Malakwen and Stephen Shepkopol will also be looking to feature among the leading runners.

The women’s field features Aliaksandra Duliba, who will be running her second top class Marathon in a month after her Belarus national record of 2:23:44 in the Chicago marathon on 17 October. The big question is how well she has recovered from that performance.

Ethiopia will be well represented thanks to Azalech Masresha Woldeselasse and Rehime Kedir Robel, the former having a personal best of 2:25:34, set as she won the Paris Marathon in 2010, although she has not run under 2:31 since then.

The Beirut Marathon women’s course record was set in 2011 by another Ethiopian runner, Saeda Kedir, when she ran 2:31:38.

BACK
Pages related to this articleAthletes
William Kipsang Rop 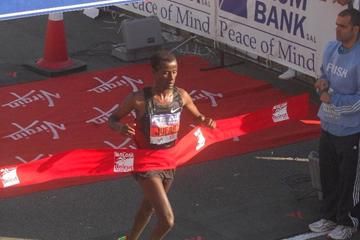 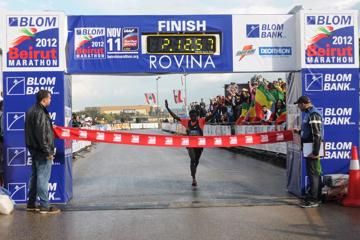 Fekadu and Kedir beat the rain in Beirut...