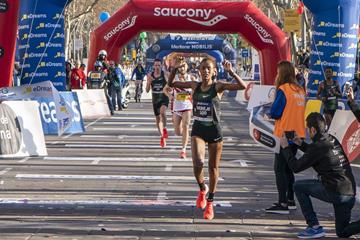 Spotlight on Dereje and Kissa at Barcelona Half Marathon

The 22-year-old won last year with a 1:06:01 lifetime best and seems ready to improve on that performance. She also bettered her marathon career best thanks on 1 December to 2:18:30 to win the Valencia Marathon. That time placed her among the top-ten on the all-time world list.

“I want to run as fast as possible on Sunday,” Dereje said. “I have my own dream and a clear goal in terms of clocking but I need to see how I feel on the race day. If the weather is fine I hope you all can enjoy something special.”

The world record is 1:04:51 set by Kenya’s Joyciline Jepkosge in Valencia in 2017. Dereje will be paced by her compatriot Daniel Feyisa.

Her stiffest opponent should be fellow Ethiopian Zeineba Yimer who holds the quickest time among the entrants, 1:05:46 for third at Ras Al Khaimah exactly one year ago. The 21-year-old made a remarkable marathon debut in Valencia last December clocking 2:19:28 for fifth, the same place she managed at the last World Half Marathon Championships also held in Valencia. Yimer enjoyed a fine 2019, clocking a 10,000m career best of 30:46:24 in Hengelo and a winning 46:52 time at the Valencia 15km in June.

Kenya’s Dorcas Kimeli should also be a factor. The 22-year-old belongs to the exclusive sub-30 minute 10km club, breaking that barrier in Prague last September when she ran an impressive 29:57 to finish second. More recently, Kimeli finished second in a cross country race in Thika where she beat world half marathon record holder Joyciline Jepkosgei by a couple of seconds.

Germany’s Melat Kejeta will try to give a scare to the theoretical podium placers. The 28-year-old Ethiopian-born runner boasts a 1:08:41 best for the distance and made a solid marathon debut in Berlin last September clocking 2:23:57.

Two other women have dipped under 70 minutes, Germany’s Alina Reh and Britain’s Charlotte Arter. Reh, a multiple European U20 and U23 champion with a 1:09:31 best, will contest her third race over the distance while Arter, 28, returns to the setting of her 1:09:41 best.

The only athlete with sub-one hour credentials is Eritrea’s Abrar Osman, the 26-year-old who managed the feat in Lisbon last year clocking 59:47. His only other appearance in 2019 came at the Amsterdam marathon where he finished 10th in his debut, clocking 2:07:46.

Yet Uganda’s Stephen Kissa should be regarded as a co-favourite despite this being his half marathon debut. The 24-year-old ran 27:47 for sixth at the Valencia 10km last month, but holds a lifetime best of 27:13 set in Laredo last March. Kissa’s convincing 41:49 win in Nijmegen over 15km suggests he should be in the hunt for victory.

Meanwhile his compatriot Mande Bushendich will also tackle the distance for the first time. He improved his 10,000m career best to 27:57.72 last summer and his last outing clocked 27:51 on a slightly downhill 10km course at the San Silvestre Vallecana. A third Ugandan on show will be Victor Kiplangat, credited with a 1:00:16 performance set in Belfort last year still aged 19.

The sold-out event’s entry cap of 23,000 was reached two weeks ago. A massive 45% of the entrants come from abroad representing a record 122 countries. Thirty-two percent of the entrants are women, also the highest ever.

Weather forecasters predict a sunny day, with temperatures between 13-14C at the time of the event with a slight wind.

Two more Kenyans, Benson Kipruto, a 2:05:13 marathoner, and Cosmas Kipchoge, who boasts a personal best of 1:00:06, are also top contenders for the podium.

Ethiopia’s Haymanot Alewe will try to spoil a Kenyan medal sweep. A 1:00:26 runner over the distance, the 22-year-old showed his fine early season form with a 28:17 10km in Thailand on 26 January.

In the women’s race, Lucy Cheruiyot is well positioned to threaten the Mexican all-comers’ and course record of 1:08:53, set by Ethiopia’s Afera Godfay Berha last year. The 23-year-old has run faster six times in her career, twice in 2017 when she set her personal best of 1:07:23 and more recently last October when winning the Cardiff Half Marathon in 1:08:20.

Her fellow Kenyan Perine Nengampi, a 1:08:04 half marathoner, will join her in trying to regain the top spot on the podium for the country, but Abeba Gebremeskel, who shows a marathon lifetime best of 2:22:29, will try to keep the trophy in Ethiopian hands.

Mexico’s Madai Perez, the fastest Spanish speaking woman over the marathon distance (2:22:59), returns to Guadalajara after missing the 2019 edition. The 40-year old has stepped on the podium seven times, including wins in 2003 and 2006.

The 34th edition of the race, powered by Granvita, celebrates Guadalajara’s 478th anniversary of its foundation. A Marathon Parade with 21 sculptures representing the race’s 21 kilometres, will also grace the 34th edition. This urban art exhibit will be displayed throughout a month, before moving to other Mexican cities.