The show recalled that it was in Buenos Aires on 24 May 1918, in the offices of the newspaper La Razón, that ConSudAtle was founded.

Its original members were Argentina, Uruguay and Chile, whereas today the area is composed of 13 IAAF member federations.

The confederation cemented its existence the following year when, in April 1919, the inaugural South American Championships were held in Montevideo, Uruguay.

“South America has been at the very heart of our sport ever since (1918),” said Coe.

“I can personally testify to the class and tenacity of Brazil’s middle-distance runners. From Agberto Guimarães, who finished fourth in Moscow in 1980, to Joaquim Cruz who led me home in Los Angeles in 1984, to José Luíz Barbosa who took the 1987 world indoor gold, Brazil has produced some of the world’s finest 800m runners.”

Yet South America’s runners have been surpassed in their brilliance by the area’s jumpers and vaulters, with the triple jump historically the standout event.

“And the triple jumping tradition lives on today, thanks to the exploits of Colombia’s 2016 Olympic champion Caterine Ibargüen and Venezuela’s Yulimar Rojas, the 2017 world champion.”

Coe also paid tribute to the outstanding contribution which Roberto Gesta De Melo had made to the development and success of athletics in South America.

“Athletics has been your lifelong passion and it’s been your dedication that has powered the administration of South American athletics,” said Coe. “The sport owes you a debt which is impossible for us to repay.

“The level of support for athletics which you have selflessly given – nationally as a former Brazilian president, regionally as area president and internationally, via your seat as on the IAAF Council – is hard to match.”

During the evening, Perez, Murer and Da Silva were each interviewed about their careers and were honoured with an IAAF Commemorative Plaque presented by Coe. They also received a copy of the centennial book, ‘Golden Heroes’ of South American athletics, from De Melo.

Perez, who as well as his Olympic and three world 20km titles was a three-time World Cup winner and a world record breaker, is the most successful South American athlete in history. Therefore, the IAAF was especially honoured last night when Perez generously donated to the IAAF Heritage Collection the competition kit he wore when winning the 2007 World Championships 20km race walk gold medal in Osaka, Japan.

Earlier in the evening, representatives of the 13 South American federations had come on stage to accept a commemorative souvenir from their area president. At the climax of proceedings it was the turn of De Melo to receive an IAAF Commemorative Plaque from Coe to officially mark ConSudAtle’s centenary.

The show ended spectacularly with the two presidents and the athletes cutting a large birthday cake together, at which moment with the shout of ‘happy birthday’, two confetti canons were fired in salute of the centenary.

At the dinner which followed the show, instead of numbers, each table was uniquely identified with signs bearing the name and photograph of a famous South American athlete.

Concluding the night’s entertainment, in between the main and dessert courses, there was a demonstration of Argentinian tango. 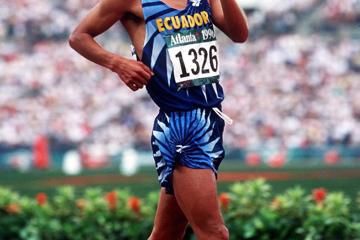 A brief history of South American athletics a...