The IAAF World Championships were the culmination of 14 years of toil and tears for the 35-year-old who was just one of a group of talented Irish walkers at the 1999 IAAF World Race Walking Cup in Mezidon.

By the time the he reached the start-line in the Luzhniki Arena, he was last man standing.

The best thing about Heffernan’s win, apart from Ireland’s first gold since the inaugural championships in 1983, was the belief that money does not necessarily buy success.

For some time after Mezidon, he lived pretty much hand-to-mouth with a lot of lean years in between.

The tears included Heffernan missing the last World Championships in Daegu when told on the eve of racing his mother had suddenly died back home in Cork.

The toil includes digging deep to follow former Olympic champion Robert Korzeniowski around the world and get the kind of advice only the best dispense.

A lot has been made of a string of near-but-no cigars for Heffernan: fourth place seemed to be his destiny.

But in fact he was delighted to get so close to an Olympic medal on The Mall in 2012, and it only needed one good day to make the breakthrough; that day was Wednesday 14 August 2013.

By using that experience, Heffernan judged his effort perfectly to inch ahead at 40km and continue to force a 58-second gap all the way to the finish.

In second place, hometown favourite Mikhail Ryzhov underlined a great year that started with a 2:28:09 performance over 35km at Sochi’s Russian Winter Championships in February, and included a PB for the 21-year-old.

In contrast, Jared Tallent has been a fixture on the walks circuit for 12 years and the Australian’s walk to bronze also contributed towards him winning the IAAF Race Walk Challenge for the second time.

If the men’s 50km was a welcome surprise, the women’s 20km was as nailed-on as anything in athletics can be.

Since her IAAF World Race Walking Cup triumph in 2012, Elena Lashmanova has dominated women’s race walking heel-and-toe, and four straight wins in 2013 started with the best time of the year at the Winter Championships on the Black Sea coast (1:25:49).

It finished in the Luzhniki, three seconds ahead of Russian team-mate Anisya Kirdyapkina when both made a move for home at 15km.

It was suitably symmetrical for the pair after Lashmanova, who won the IAAF Race Walk Challenge at the same time, finished 10 seconds ahead of Kirdyapkina at Sochi.

Ivanov the new star over 20km

The 20km men saw another new neck draped in gold – even if Aleksandr Ivanov did roll off the Russian conveyor belt marked ‘champions’.

A year before, the 20-year-old was just as happy with world junior success at half the distance. But he showed maturity beyond his years to come from 13th to head Olympic gold medallist Chen Ding by the tape.

Miguel Angel Lopez produced the second eye-opening medal when he won bronze after the Spaniard’s scintillating last 5km that owed something to the disqualification of Guatemala’s Erick Barrondo.

However, the best men’s time of the year went to a man not even on the World Championships start line.

Pyotr Trofimov started 2013 with a bang at the Russian Winter Championships. His 1:18:28 was a massive 38 seconds ahead of Andrei Ruzavin, who did make Moscow and probably wished he hadn’t after finishing fifth-last and more than 13 minutes slower than February.

Former world champion Sergey Bakulin was also a Sochi winner at 35km (2:26:08) but barely featured after that.

Indoors, the rarely contested mile event at New York’s famous Millrose Games went to USA’s Jonathan Hallman in 6:07.6, while first woman home over the boards was Maria Machita in 6:40.0.

The IAAF Race Walk Challenge dominated the 2013 scene from Chihuahua in February through to Moscow, but there was an amazing three weeks for Japan’s Yusuke Suzuki in the early stages of the year.

The man famed for revving up races in the early stages improved the national record on 17 February in Kobe (1:19:02) and then broke everything else up to 20km on the road 23 days later on a twisting rain-swept Nomi City course.

Suzuki’s split times of 38:43 for 10km and 58:19 for 15km were Japanese bests by a margin that led to a final 1:18:34 – undoubtedly the best performance of the year given the 25-year-old’s splendid isolation from the gun to go with the atrocious conditions.

On the site of a previous Race Walk Challenge final, Ben Sanchez was first across the line in Murcia to take the Spanish National Championship 20km on 3 March in 1:22.33. But the man seven seconds back had the last laugh when Lopez took third in Moscow.

In fact, the next Spaniard home at the World Championships was Alvaro Martin in 24th, the 10km winner in Murcia (41:52) – 23 seconds ahead of junior arch rival Marc Tur.

The Spanish women’s 20km was a stroll for Julia Takacs (1:28:44) who was the best part of a kilometre better than second.

And on the theme of countries shorn of recent race walking success, it’s been a while since the all-black of New Zealand fronted a major event.

But Quentin Rew’s unheralded progress saw the 29-year-old Kiwi come first in the Naumberg International race on 28 April in 1:22:16 for a PB, before he walked another best at 50km in Moscow.

Not bad for a walker who got disqualified at the 2009 New Zealand Championships for larking around at the finishing line as he crossed with a forward roll.

He should worry. They are still performing handstands for Heffernan back in Cork. 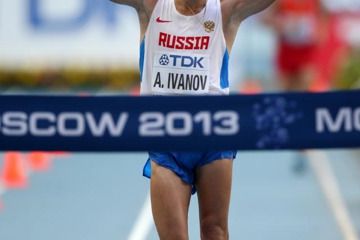 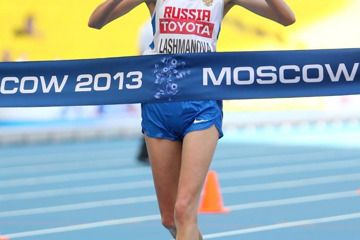 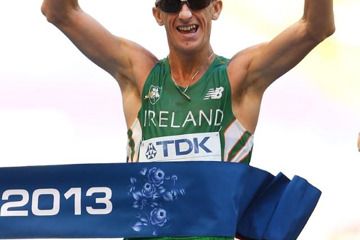