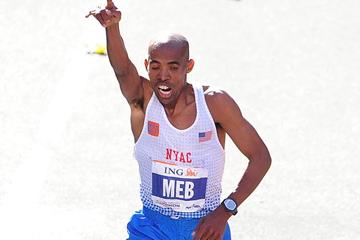 “We’re excited to welcome two of the world’s top athletes to the 2014 TCS New York City Marathon as Team for Kids Ambassadors,” said Mary Wittenberg, President and CEO of New York Road Runners who are the organisers of the IAAF Gold Label Road Race.

“Both Meb, who is the ultimate example of the American Dream, and Caroline, who has reached the pinnacle of the tennis world, will transcend their roles as professional athletes by representing the hundreds of thousands of young people who benefit from NYRR’s free youth running programs and initiatives.

“Meb will highlight a world-class field of athletes competing for the marathon title, while Caroline will join thousands of runners raising critical funds for worthy charities. They’ll serve as inspirations to the 50,000 runners and millions of fans lining the streets of the City’s five boroughs and watching the race broadcast around the world.”

Keflezighi, 39, won at the 2014 Boston Marathon in April to become the first American man to win the race since Greg Meyer in 1983.

Similarly, in 2009, he became the first American since Alberto Salazar in 1982 to win the New York City Marathon.

“I am excited to be running the TCS New York City Marathon for the ninth time. This is a very special race and city for me,” Keflezighi said. “Additionally, I am honoured to be a Team for Kids Ambassador and raise funds for the MEB Foundation.”

A three-time Olympian, Keflezighi captured the silver medal at the 2004 Athens Olympic Marathon and took fourth place in the London 2012 Olympic Games marathon.

The TCS New York City Marathon will be her road racing debut.

“I can’t wait to trade my tennis racquet for a pair of running shoes and take part in the 2014 TCS New York City Marathon as a New York Road Runners Team for Kids Ambassador,” said Wozniacki.

“I grew up in a family where sports were a huge part of our lives, and I learned from a young age the importance of being active. That’s why running for Team for Kids is so important to me. When I cross the finish line in Central Park, it will be one of the most rewarding days of my life, not only because of the personal accomplishment, but also because it will help thousands of kids to get healthy and fit through sports.”

As Team for Kids Ambassadors, Keflezighi and Wozniacki will support and raise funds for the NYRR Team for Kids charity running team.

Team for Kids is a committed group of adult runners from around the world who add meaning to their miles by raising funds for youth running programs for kids who would otherwise have little or no access to regular physical activity; these programs serve more than 200,000 schoolchildren in New York City’s five boroughs and around the country.

Both athletes will participate in Team for Kids activities during race week and will represent more than 1,700 Team for Kids runners, who will raise an estimated $4.5 million on race day.