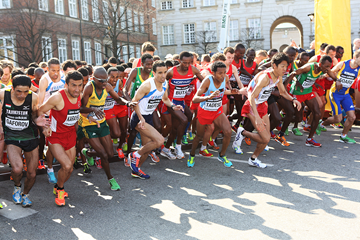 Thursday 17 December marks 100 days until the IAAF/Cardiff University World Half Marathon Championships Cardiff 2016, the biggest athletics event ever to be held in Wales, which will take place on Saturday 26 March.

Preliminary entries do not close until 26 January but there are high hopes that the number of participants will eventually exceed the 203 runners from 56 IAAF member federations that competed at the last IAAF World Half Marathon Championships, the hugely successful 2014 edition held in Copenhagen.

The men’s champion in the Danish capital, Kenya’s Geoffrey Kamworor, has already declared his intention to defend his title. He recently audaciously stated: “If the conditions and the course is okay, I will attempt to break the world record in Cardiff.”

The half marathon world record stands at 58:23 to Zersenay Tadese, which the Eritrean ran in 2010, but few who have seen Kamworor in action in the past two years doubt that the world cross-country champion and world 10,000m silver medallist also has the talent to add this record to his list of accolades on the right day.

Joining Kamworor and the rest of the elite international runners chasing first prize cheques of US$30,000 (for both men and women) will be an estimated 20,000 members of the general public, who will get the chance to ‘run in the footsteps of champions’ by competing on the same 21km route around Cardiff at the same time as the world’s best men and women.

Matt Newman, chief executive of the event organisers Run 4 Wales, commented: “With 100 days to go until the IAAF/Cardiff University World Half Marathon Championships, there is a real buzz around the city. It’s been great to see so many people from the Welsh sporting scene giving their support to the event.

“Preparations are now well underway for the IAAF/Cardiff University World Half Marathon Championships and we are looking forward to a spectacular event to make Cardiff and Wales proud.

“The response from the running community has been incredible and we will be welcoming people from all over the UK, Europe and the rest of the world.

Wales rugby captain Sam Warburton is among the many local and international celebrities supporting the championships. “The IAAF/Cardiff University World Half Marathon Championships is going to be another fantastic event for Cardiff and Wales," he said.

“I’d like to wish everyone training for the event the best of luck, I am sure it will be an amazing experience.”