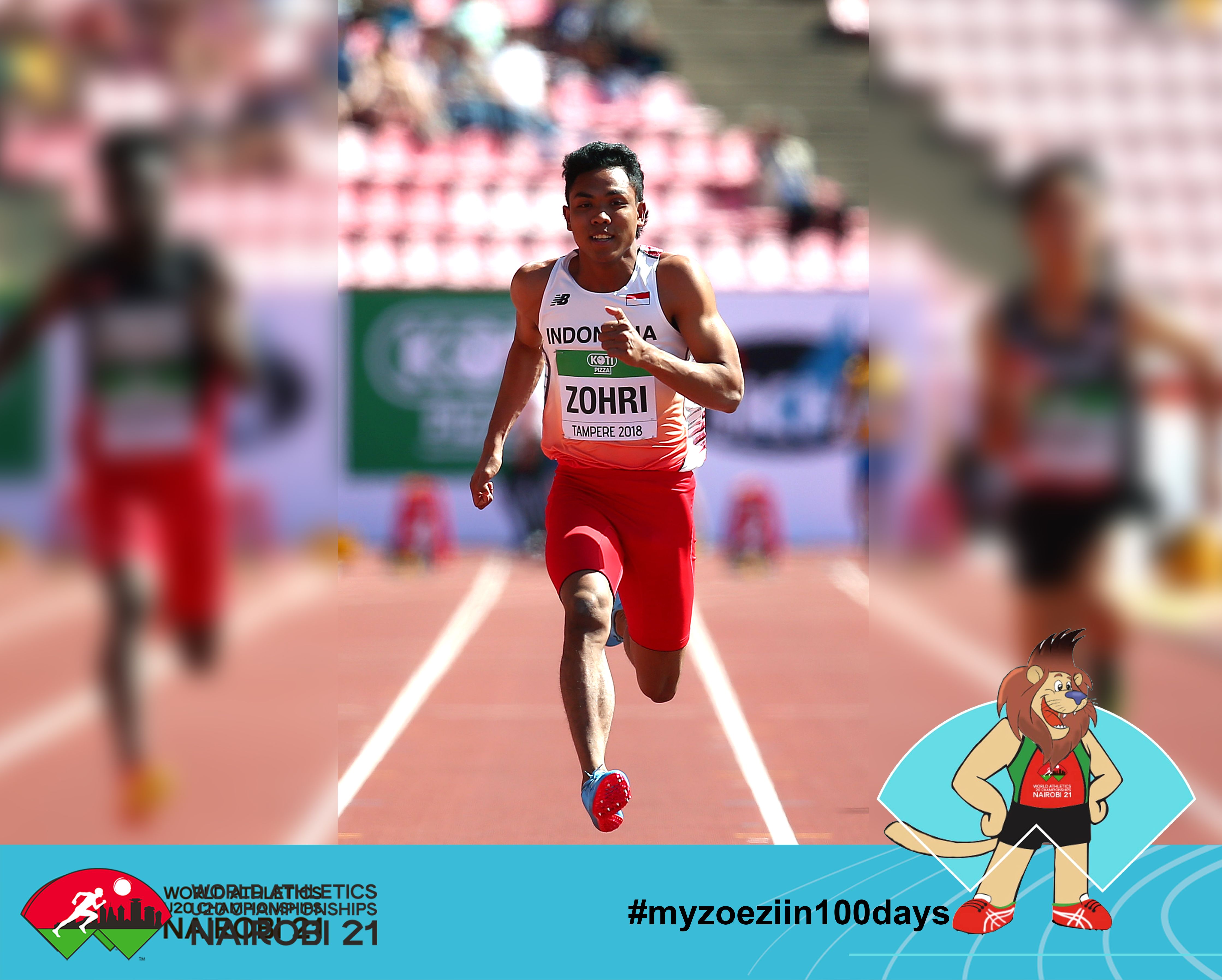 Lalu Muhammad Zohri is an Indonesian sprinter who was born on July 1, 2000. With a gold medal in the 100m, he becomes the first Indonesian and the only Asian male to win a medal at the IAAF World U20 Championships. He holds the Indonesian national records in the 100m and 200m and is known as the "fastest man in Southeast Asia." Zohri grew up in a house made of wood and woven bamboo in West Pemenang village, Pemenang subdistrict, North Lombok Regency, on the eastern island of Lombok. He is the eldest of four siblings. His mother died when he was a child, and his father died when he was 17 years old. Because he couldn't afford shoes, he had to train barefoot. He was able to persuade his sister to grant him Rp 400,000 (21 Euros) so that he could purchase a pair of spikes for his meetings, despite the fact that the money came partly from his allowance. In a time of 10.27 seconds, he won the 100 meters at the 2018 Asian Junior Athletics Championships in Japan.

In the 100 meters, Zohri represented Indonesia at the 2018 IAAF World U20 Championships. He took first position in the first round with a time of 10.30 seconds. He finished second in the semifinals with a marginally faster time of 10.24, just a fraction behind than World Youth 100m Record Holder and gold medal favorite Anthony Schwartz. In the final, he was assigned to lane eight, which began less than three hours later. Zohri got out to a good start, remaining close to Schwartz, who took the lead. At 60 meters, he gradually crept up on Schwartz, and in the final 10 meters, he surged past of him to win the gold medal by a sliver of a second. His time of 10.18 seconds (+1.2 m/s) was an Indonesian junior record, almost edging out Suryo Agung Wibowo's national record of 10.17 seconds set in the 2009 Southeast Asian Games. Following the Asian Games, Zohri competed at the Malaysia Open Grand Prix for the first time, claiming gold in the 100m race with a time of 10.20 seconds. Zohri finished second in the Asian Athletics Championships in the 100m with a time of 10.13 seconds, behind Japanese Yoshihide Kiry. Zohri set a new national record of 10.15 seconds during the competition's semifinals. In August 2019, he ran the 200m finals at the 2019 Indonesian National Athletics Championship in Bogor, West Java, and broke the national record with a time of 20.81 seconds. 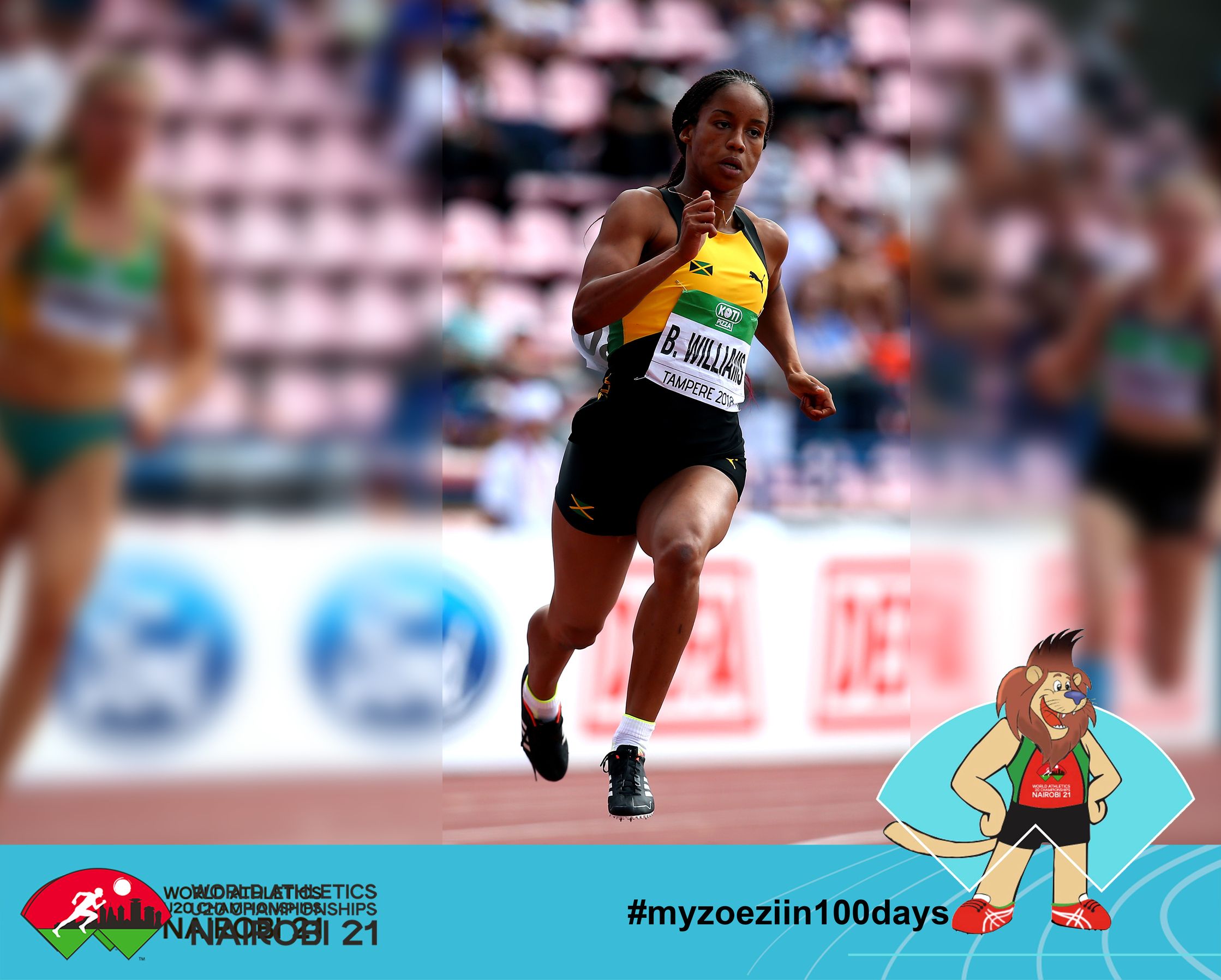 Williams won three gold medals in the under-20 category at the 2019 CARIFTA Games in April, this time in the 100 m, 200 m, and 4  100 m relay. At the JAC Open in Jacksonville, Florida on June 1, Williams set a new Jamaican under-18 and under-20 record in the women's 100 meters, improving on Kiara Grant's under-20 mark set the month before by one hundredth of a second to 11.10 seconds. Grant reclaimed the record a week later at the NCAA Division I Championships in Austin, Texas, with a final time of 11.04 seconds, but Williams improved the time to 11.02 seconds at the Great Southwest Classic in Albuquerque, New Mexico, less than an hour later. On June 21, 2019, Williams won the Jamaican Championships in the 100 m final with a time of 10.94 seconds, which would have improved her Jamaican under-20 record and established a world under-18 fastest time. During the competition, though, she tested positive for the banned diuretic hydrochlorothiazide. Her scores at the Jamaican Championships were erased, but she was found not guilty and did not receive a period of ineligibility to compete.  At the JAC Summer Open in Jacksonville, Florida on 30 May, Williams improved her official Jamaican under-20 mark of 11.02 seconds in the women's 100 meters, clocking 11.19 seconds in the prelims and 11.01 seconds in the final but, the time was aided by a +2.5 m/s wind, making it ineligible for record purposes, which require a wind velocity of no more than +2.0 m/s. With only a +1.0 m/s wind in the final, she won in 10.98 seconds, setting her second Jamaican under-20 record in two days. Williams won the Austin Sealy Award in both the 2018 and 2019 CARIFTA Games for setting records and winning gold medals in the 100, 200, and 4 by 100 meters relay. Since Usain Bolt in 2004, she was the first Jamaican athlete to win the award two years in a succession. She was nominated for the IAAF Female Rising Star Award in 2018 and the Laureus Breakthrough of the Year Award for her athletic achievements.