With master plan in mind, Cheruiyot turns silver into gold

After a while, Vivian Cheruiyot started to think she was cursed.

The 32-year-old Kenyan, widely considered one of the greatest ever female distance runners, had won four world titles, two Olympic silver medals, but if anything, all that did was heighten the frustration about the one missing piece of the puzzle: an Olympic gold.

Last Friday night in Rio, however, she finally found fulfilment, upsetting seemingly overwhelming odds in the shape of Ethiopia’s Almaz Ayana, to send the title back to Kenya for the first time in Olympic history.

Few had given her a chance. Despite running the third fastest 10,000m in history with 29:32.53 when taking silver behind Ayana’s world record a week earlier, many considered the silver medal in the shorter distance to be the limit of Cheruiyot’s ability.

“There is nobody who is unbeatable,” said Cheruiyot. “When I used to race (Meseret) Defar and (Tirunesh) Dibaba, they used to say they were the queens of 5000m and 10,000m, but I beat them.

"Last year we followed behind Ayana all the time, in every race, but we said ‘maybe next year we can beat her’.”

Ricky Simms, the Irishman who coaches and manages Cheruiyot, along with her teammate Hellen Obiri, was another who refused to follow the script.

Aware that Ayana was an almost indomitable force, he hatched a plan for his protégées during their preparations that he believed would give them a fighting chance.

“We knew it would be a different race to the 10,000m,” said Simms. “The longer it went on slower, the better it suited the girls because Hellen is coming from a 1500m background.”

They knew Ayana’s strengths – as intimidating as they were – but perhaps more importantly they knew her plan of attack. Simms expected Ayana to run with the pack for the first two kilometres before surging with a 64 or 65-second lap to build a lead.

That’s exactly what happened, Ayana powering to the front after 1700m, dropping a 64.7-second lap and almost immediately opening a 20-metre advantage on the field.

Cheruiyot, however, was ready for that move, but rather than chasing her down immediately, she played it cool.

“If the girls went with her, she was going to keep pushing and pushing and put them under,” said Simms. “I know Vivian and Hellen can run 8:24, 8:25 for 3000m, so I said you keep running 68s, then with five laps to go you have to run harder; one of you go then the other goes to work her back.”

Ayana's mid-race lead grew to 40 metres at one point, and it appeared that Cheruiyot was bound, yet again, for another near-miss at the Olympics, but soon it stopped growing.

“We thought Ayana might not be as strong because she’s not coming from a 10k background,” said Simms. “Before the race I went through all the things that could be different to the 10K: someone could be carrying an injury, someone could be ill, someone could be fighting with their boyfriend. It was a longshot, but we had to try.”

In the fourth kilometre, Ayana showed the first flicker of fragility, her lap splits dropping from 68s to 69s, then to just 70 on the penultimate circuit. Cheruiyot, meanwhile, was cranking through the gears, just as planned, moving from 69s to 66 and dropping a 64-second lap to move past Ayana with 700 metres to go.

“I said I want to win,” said Cheruiyot, “and I went with everything.”

“It means a lot to Kenya,” said Cheruiyot. “The plan worked really nicely, so I have to say thank you to my manager. This was my fourth Olympics and I’ve been dreaming about this since the very start.”

That first Olympics, all the way back in 2000, must have felt like a lifetime ago on Friday night. At the age of 17, Cheruiyot finished 14th in the 5000m final in Sydney, and though Simms didn’t officially start working with her for four more years, he was aware of her talent from the outset.

“She is a supernatural talent, one of the greatest female distance runners in history,” said Simms, who has worked closely with Cheruiyot the past decade.

Cheruiyot missed the Athens Olympics in 2004, and came down ill shortly before the 2008 Games in Beijing, eventually finishing fifth over 5000m. At the London 2012 Olympic Games, she finished third in the 10,000m and second over 5000m, two near-misses that left her reeling.

“She was broken a little bit mentally by that,” said Simms.

In 2013, Cheruiyot decided to take time out from the sport to have a baby, returning after almost two years away to win 10,000m gold at the IAAF World Championships Beijing 2015.

She knew, at the age of 32, this might be her final chance at achieving the ultimate goal, and Cheruiyot’s training certainly indicated something special was on the cards on the build-up to Rio. “It was the first time my training had no interruptions,” she said. “Everything was good.”

For Simms, Cheruiyot’s golden run was also an extremely proud moment, even if he had been here before, having worked closely alongside the late Kim McDonald with 2000 Olympic 1500m champion Noah Ngeny.

“She’s like my daughter,” said Simms, who writes training programmes for Cheruiyot and Obiri and talks with them over the phone almost daily from his home in Monaco. “We have a number of coaches in Kenya who are timing the workouts and they report back every day. It’s usually two hard workouts per week.”

On the road again

Having achieved everything there is to achieve on the track, a new challenge beckons for Cheruiyot. She will race the Great North Run in Newcastle on 11 September, all part of a transition towards her marathon debut in 2017.

“Everyone knew that I was planning to move to the ultimate distance,” she said. “It has been my dream.”

For now it was time to luxuriate in the satisfaction of a plan coming together. In Rio, Cheruiyot proved that not only is she an athlete of immense physical capabilities, but also one with great tactical accumen who refused to let past disappointments scupper her dream, the sign of a true champion. 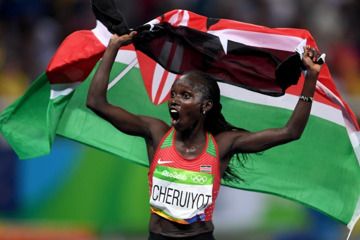