With first global medal behind her, Preiner turns her attention to Tokyo

If being a high performance athlete is all about self-improvement then world heptathlon bronze medallist Verena Preiner unequivocally ticks every box.

Combining her passion for the sport with her naturally “ambitious” nature she has steadily emerged as a top-class athlete, emphasised by her richly-deserved heptathlon bronze medal at the World Championships last year in Doha.

Ambition is the key

With the Tokyo 2020 Olympics looming large into view, the Austrian looks very well positioned to make an impact. And she has little doubt as to what has proved the key driving force of her success.

“I am very ambitious,” she explains. “I was not the best at a young age but I always try to do better. It is not in my mind that I will not succeed. I try to be the best I can in every area of my life.”

Born and raised in the market town of Ebensee in upper Austria, she was introduced to athletics at her local club from the age of “six or seven.”

“I loved skiing in the mountains and swimming but track and field was the only sport I wanted to do competitively,” she explains.

She started her athletics life as a middle-distance and cross country runner and was good enough to snag the Austrian U16 cross country title.

However, with a curiosity for all athletics disciplines, at the age of 15 she entered her first heptathlon, and set an Austrian U16 record, which set Preiner on a new athletics path.

Motivated by a desire to one day pursue a professional athletics career she sought out leading Austrian coach Wolfgang Adler to aid her multi-event development.

The one time coach to Ivona Dadic – Austria’s other star female multi-eventer and 2018 World Indoor pentathlon silver medallist – Adler had a reputation as the best in the business and since linking up with him from the age of 16 the pair have enjoyed a successful coach-athlete relationship.

“He sets very clear goals in training and he never says there is anything you cannot do,” she explains of her coach for the past nine years. “I never go home with a bad feeling after training, he always tries to improve me as an athlete.”

International debut in Lille, at 16

A matter of months after making her heptathlon debut she won selection for the Austrian team bound for the 2011 World U18 Championships in Lille.

Aged just 16 at the time, she finished 23rd with a PB of 4650 points – but rather than dent her confidence, she found competing on the global stage hugely motivating.

Amusingly, she also recalls her memories of competing in the second heptathlon discipline, the high jump.

“The high jump was my worst event and I remember the opening height was set at 1.45m,” she explains. “At the time my PB was only around 1.48m or 1.50m and I recall my dad, who was in the stadium at the time, couldn’t look. I thought if I don’t clear 1.45m my competition will be over after two events but, thankfully, I cleared 1.45m at the third attempt.”

Under Adler’s patient guidance, Preiner has gradually improved. In 2013 she cracked 5000 points for the first time. The following year she placed ninth at the World U20 Championships in Eugene, Oregon, by setting or equalling her PB in six of the seven disciplines (5530pts).

The 2015 campaign proved even better as she finished fourth with a PB tally of 5840 at the European U23 Championships in Estonia - one place behind Dadic.

“This was motivating for me because it proved Austria can medal in major competition and showed me if I can continue to train hard, I too can win medals.”

The 2016 campaign was challenging. She struggled with an ongoing foot injury and despite securing her place at the European Championships in Amsterdam just one week prior to the event, she breached the 6000 point barrier for the first time with a 6050 performance for seventh.

That year also provided another highlight when facing 2012 Olympic champion Jessica Ennis-Hill for the first time in Ratingen.

Preiner has huge admiration for the British multi-eventer and looks back fondly on their 800m clash in the heptathlon where Ennis-Hill edged the Austrian by 0.19 in a winning time of 2:11.46.

“To run against her and to have such a close battle was so special for me,” she adds.

The 2017 campaign involved a rollercoaster of emotions but once again ended in credit. Foot and ankle issues marred her preparations for the season but at the European U23 Championships she snared her first international medal with silver in an Austrian U23 record of 6232.

Qualifying for the 2017 World Championships in London, Preiner was on track for a top-16 finish leading into the 800m when she was forced to withdraw due to a bad bout of asthma.

Hugely disappointed not to complete the heptathlon in the British capital she bounced back just three weeks later to strike heptathlon gold at the World University Games in Taipei with a score of 6224.

In 2018, Preiner maintained her streak of a PB during every international season with a 6337 total for eighth place at the European Championships in Berlin.

Yet she really matured as a top-class athlete during a memorable 2019 campaign. A quality javelin thrower (49.58m) and 800m (2:07.74) in more recent times the Linz-based multi-eventer has also made significant improvements in the high jump thanks to a greater understanding of her body through gymnastic work.

Verena Preiner after the heptathlon 800m in Ratingen

After a solid indoor season – in which she placed sixth in the pentathlon at the European Championships in Glasgow – the 1.77m-tall multi-eventer had the good fortune of an injury-free preparation for the outdoor campaign.

After smashing her heptathlon PB with a 6472 performance in a low-key event in Arona, Tenerife, she went on to post a national record 6591 for victory in Ratingen powered by PBs in a remarkable six disciplines - including a 1.80m high jump.

“It was not in my mind to break the Austrian record,” she explains. “I always had Ivona (Dadic) as an idol.”

Adopting a realistic approach at the Doha World Championships in which she was one of “six or seven girls” in the hunt for a bronze medal behind Katarina Johnson-Thompson and Nafi Thiam (the eventual gold and silver medallists), Preiner made the perfect start by scalping 0.17 from her lifetime best in the 100m hurdles in a time of 13.25.

Lying sixth overnight she says: “I’ve never had such a relaxing night’s sleep, I had a chance of winning a bronze medal but I knew that the long jump would be a major event.”

It did, indeed, prove critical. Preiner set a 2cm PB of 6.36m to put her in pole position for the bronze. A 46.68m javelin strengthened her medal challenge and with the 800m to come, she knew a podium place was within her grasp.

“I just had to concentrate, keep calm and not make any mistakes like running on the lane,” she explains.

Executing a rock solid 2:08.88 – just over a second outside her best – she secured bronze with 6560 points – the second best total of her flourishing career. It was a huge moment.

“Receiving the medal I just thought of all the family and friends who had helped me along the way,” she explains. “It was then I realised, I have done it, I’ve got a medal. I will never forget it, it was such a special moment.”

Doha proved not only a memorable personal achievement for Preiner but also her country as Austria snared multiple medals at a World Athletics Championships for the first time thanks to Lukas Weisshaidinger’s discus bronze. It also helped propel her to the 2019 Combined Events Challenge title.

Believing her federation is doing all it can to fulfil her country’s athletics talent she can look ahead with confidence to the 2020 season, highlighted by the Tokyo Olympic Games.

“I cannot plan a medal, I just have to hope that I keep my body fit, do the best I can on the day and see what is possible.”

It is a mantra the modest athlete has adhered to for so much of her career and given her past record few would bet against Preiner making the next step in her relentless ascendency to the top.

BACK
Pages related to this articleAthletes
Verena MAYR 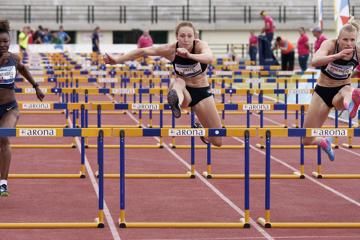 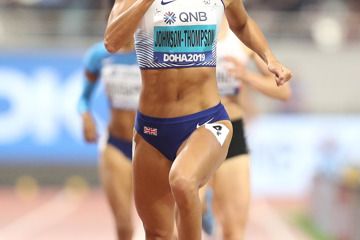 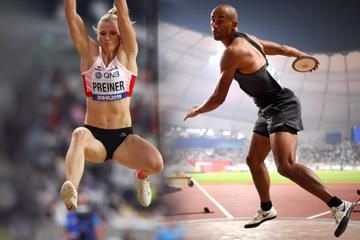