George Michael once boomed out the lyrics ‘You Gotta Have Faith’ and perhaps it is those four words which best sum up the journey taken by Salwa Eid Naser on her road to the girls’ 400m gold at the IAAF World Youth Championships, Cali 2015 last Friday.

The teenager from Bahrain flew to victory in the Pascual Guerrero Stadium in an impressive world-junior-leading time of 51.50. Yet perhaps none of this success would have been possible without Naser's total belief in her talent, coach and religion.

Born in Nigeria, Naser moved with her family to the small island kingdom of Bahrain, situated in the Persian Gulf, when she was “little”.

Her mother had competed as a 100m and 200m sprinter at school and Naser herself quickly discovered an ability to sprint.

“As kids, we would run around and play, and they (the other kids) would say I was fast,” said Naser, who is based in Bahrain’s second largest city, Riffa.

Her first competitive race aged 11 backed up her belief. She defeated all comers over 100m in a school race, and then later over 400m, although the latter victory wasn't a pleasant experience.

“When I finished, I felt so bad I thought I never want to run another 400m again because it was so stressful,” she admitted. “But my teacher insisted that I would make a good 400m runner, so I had no choice but to do it. I am so grateful I listened to my teacher.”

It was also the light bulb moment when she finally understood she had so much more to give.

“I won two gold medals, but I realised I have to take my training and everything more seriously,” said Naser, who competes in a hijab. “I realised I had supportive parents and a supportive federation and I had to do more.”

With a new attitude to the sport, just one month later she posted a 400m best of 54.50 at the Asian Youth Olympic Games Trials in Bangkok. At last August’s Youth Olympic Games in Nanjing, China, Naser won a 400m silver medal after setting personal bests of 53.95 in her heat and then 52.74 in the final.

She was elated at the giant strides made, but wanted more.

“I was so happy and excited after China last year, but I made a vow that this year was going to be better and I started to train differently,” she explained, chatting in a Cali hotel after her win in the Colombian city.

Naser has since started working with a new coach, the Bulgarian Yanko Bratanov – who also coaches Asian 400m hurdles champion Kemi Adekoya – and the combination has gelled well.

“He is like a father to me and he would do the same for me what he would for his own daughter,” added Naser. “He gives me advice, training and support. He never allows me to get scared, and when he sees a problem he sorts it.”

Besides Bratanov’s input, Naser has also decided to go one step further in pursuit of excellence by each morning adding callisthenics to her usual training routine.

“I have a special push up stand at home which helps my hands become stronger, the sit ups are good for toning,” the 17-year-old added with a giggle. “I think it is great to have a strong tummy.”

Back in May, her faith in her training regime was rewarded when she landed the Asian youth 400m title in 53.02. Last month she ran 52.80 for the 400m and set a national junior 200m record of 23.34 at the Bulgarian Championships in Sofia on a brief training sojourn in her coach's home country.

Naser has also had to contend with the final phase of her preparation coinciding with the Muslim Holy Month of Ramadan in which strict fasting is observed in daylight hours.

Naser says the fasting proved “a bit difficult, but not too much” with her evening sessions taking place after the daily fast.

The Bahraini one-lap exponent was confident she was in the shape of her life coming into Cali, but was disappointed to qualify as only third quickest for the final with her semi-final time of 52.99, slower than USA’s Lynna Irby and Canada’s Kyra Constantine.

Nonetheless, she refused to panic despite the good showing of her North American rivals. She took key lessons out of the experience and kept the faith.

“My semi-final was not that good, but I learned something,” she said. “I didn’t apply my own (race) plan but in the final I knew it would be different. The most important aspect of the 400m is the final 100m.”

In the final, she delivered her plan to perfection.

Biding her time after Irby blasted through the first 200m, Naser’s more patient approach paid dividends. Rounding the final turn, Naser caught the US sprinter and then the Bahraini teenager started to forge ahead, eventually winning by 0.29 in a stunning personal best of 51.50.

“I was happy, of course. It meant a lot to me,” said Naser, who may consider competing at the IAAF World Championships in Beijing next month.

There was another additional benefit of the final taking place on Friday 19 July – the day of the festival of the Eid-al-Fitr – and the day after Ramadan when Muslims are not expected to fast any longer.

Naser refuses to believe that this coincidence may have contributed hugely to her gold medal success but it certainly can’t have done any harm.

It could not stop one ebullient Bahraini team official quipping: “We celebrated two holidays that day, one for the religion and the other for the gold medal.”

For Naser it was a gold medal built on the foundation of total faith. 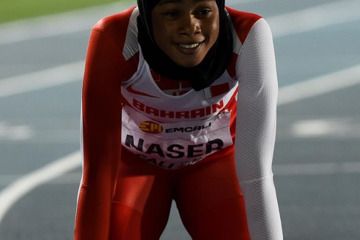