Looking back at world records set at past World Athletics Championships

How many world records will fall when the World Athletics Championships come to the reimagined Hayward Field at the University of Oregon on July 15–24? This 18th edition of the World Championships will mark the first time the event is held on U.S. soil.

Fans should plan to see a world record or two fall at Hayward Field. In the previous 17 World Championships, there were only four instances  when no world records were set: 1997 in Athens, 2001 in Edmonton, Alberta (also the only other time the World Championships have been held in the Western Hemisphere), 2007 in Osaka, Japan, and 2013 in Moscow.

Thirty-two world records have been set in the previous 17 World Championships. Five of those 32 world records were set in 1993 in Stuttgart, Germany, with four more set two years later in Gothenburg, Sweden.

Fourteen of the 32 world records have been set by Americans, and the event with the most world records at the World Championships is the 4x100m with five.

World records have never been set at a previous World Championships in a men’s throwing event or a distance race of any kind. American shot putter Ryan Crouser could end that trend this summer, or perhaps a city known for distance running will see the first distance World Championships world record from a star such as Sifan Hassan, Faith Kipyegon, Hellen Obiri, Letesenbet Gidey, Jakob Ingebrigtsen, Timothy Cheruiyot, or Joshua Cheptegei.

The only women’s world record set at the first World Championships in Helsinki came in the 400m as Czechoslovakia’s Jarmila Kratochilova became the first woman to break 48 seconds when she won in 47.99. Kratochilova also won the 800 in 1:54.68.

The only women’s world record set in Rome was an astounding clearance of 2.09m by Bulgaria’s Stefka Kostadinova in the high jump that remains the world record today. Kostadinova gave a hint of what was to come when she won the world indoor title earlier that year in Indianapolis at 2.05m. Kostadinova is considered the greatest women’s high jumper ever with 197 clearances of 2 meters or more. She won another World Championships title in 1995, was the 1996 Olympic champion, and set seven world records indoors and outdoors over her career.

Sally Gunnell of Great Britain and Sandra Farmer-Patrick of the U.S. put on the best race of the championships in Stuttgart, Germany, when both broke the world record in the 400m hurdles. Gunnell’s winning time was 52.74, and Farmer-Patrick finished in 52.79. The previous world record of 52.94 was set by Russia’s Maria Stepanova in 1986. Farmer-Patrick destroyed her previous U.S. record of 53.37, set 4 years earlier. The women’s triple jump made its World Championships debut with a bang as Russia’s Anna Biryukova became the first woman to surpass 15 meters when she flew 15.09m to break the 2-month-old world record of 14.97m.

In Gothenburg, Sweden, world records again tumbled in the 400m hurdles and triple jump. In the 400 hurdles, Kim Batten held off Tonya Buford-Bailey to win in 52.61, just ahead of Buford-Bailey's 52.62 as both bettered Sally Gunnell’s mark. The two Americans had been fourth and fifth, respectively, in Stuttgart. In the triple jump, Ukraine’s Inessa Kravets broke Biryukova’s world record from Stuttgart with a massive leap of 15.50m, which remained the world record until Venezuela’s Yulimar Rojas jumped 15.67m to win the Tokyo Olympics last summer. Bulgaria’s Iva Prandzheva also surpassed the old record in Gothenburg, finishing second in 15.18m, and Biryukova was third in 15.08m, just missing her previous world record.

Stacy Dragila of the U.S. won the pole vault when it was first contested at a World Championships in Seville, Spain. Dragila cleared 4.60m to break the world record of 4.59m set by Australia’s Emma George 17 months earlier.

Three world records fell in Helsinki, which remains the only city to host the World Championships twice. Russia’s Yelena Isinbaeva improved her month-old world record by 1 centimeter when she cleared 5.01m and smashed the previous World Championships record of 4.75m. The bronze medalist in Paris, Isinbaeva would repeat in Osaka, Japan, in 2007, and won her last world title on home soil in Moscow in 2013. In the javelin, Osleidys Menendez of Cuba launched a throw of 71.70m. Menendez broke her previous world record, set a year earlier, by 17 centimeters, and is still No. 2 on the all-time list. In the 20K racewalk, Russia’s Olimpiada Ivanova, who also won in Edmonton in 2001, clocked 1:25:41, to break a 5-year-old world record by 18 seconds.

In Beijing, Poland’s Anita Wlodarczyk won the first of her four World Championships with a world-record heave of 77.96m, breaking a 3-year-old world record by 16 centimeters. Wlodarczyk has the current world record of 82.98m, and owns 18 of the 20 longest throws in history.

In Doha, Qatar, Dalilah Muhammad of the U.S. set her second world record of the summer in the 400m hurdles with a time of 52.16, breaking her mark of 52.20 set at the U.S. Championships about 2.5 months earlier. Muhammad finished just ahead of teammate Sydney McLaughlin, who ran 52.23. The U.S. also broke the world record in the new mixed 4x400m relay twice with times of 3:12.42 in the semifinals and 3:09.34 in the final. Allyson Felix was part of the U.S. team in the final. 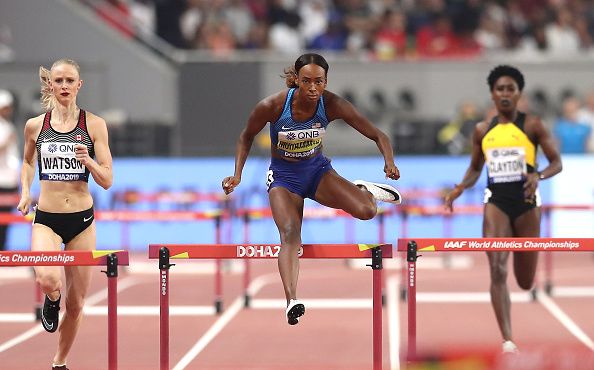 In Rome, Carl Lewis initially finished second in the 100m behind Canada’s Ben Johnson, who ran a world-record 9.83, but that was overturned when Johnson was banned from the sport for drug use. Lewis also broke the old record of 9.95 in running 9.93 and was recognized as the winner and world record-holder. Lewis also led the U.S. to another 4x100m relay win, and repeated as long jump champion.

The third World Championships, held in Tokyo, were dominated by Carl Lewis, who set a world record in winning his third straight 100m title in 9.86 and anchoring another world-record win in the 4x100m relay in 37.50. What Lewis will be most remembered for from Tokyo, however, was his epic long jump dual with Mike Powell. Powell won with a leap of 8.95m to break the world record of 8.90m set by Bob Beamon at the 1968 Mexico City Olympics. Lewis, who was jumping after Powell in the competition, had a better overall series, setting a championship record of 8.68m on his opening jump. He also had wind-aided marks of 8.83m and 8.91m before finishing with legal marks of 8.87m and 8.84m, breaking his PR of 8.78m. Lewis had a 65-meet winning streak in the long jump dating back to 1981. Powell moved into second place when he went 8.54m on his second jump of the competition. He remained in second until uncorking his world record in the fifth of six rounds. Powell’s previous PR was 8.66m. In Stuttgart, the U.S. equaled the world record of 37.40 in the semifinals of the 4x100m relay before winning the final in 37.48 with a team of Andre Cason, Jon Drummond, Leroy Burrell, and Dennis Mitchell. The U.S. 4x400m relay team, led by Quincy Watts and Michael Johnson, set the still-standing world record of 2:54.29, obliterating by nearly 1.5 seconds the old mark  that Watts and Johnson helped set at the 1992 Barcelona Olympics. The third men’s world record was turned in by Great Britain’s Colin Jackson, who won the 110m hurdles in 12.91 to break the old mark of 12.92.

Great Britain’s Jonathan Edwards wowed the crowd at Gothenburg, Sweden, when he broke the world record twice in the triple jump with leaps of 18.16m and 18.29m. Edwards, who had set the previous world record of 17.98m three weeks earlier, became the first man to break 18 meters and the first and only man since over 60 feet with his 18.29m mark (60-0¼).

Michael Johnson, in his final World Championships at Seville, Spain, added the 400m world record to his 200m world record, winning in 43.18 to break the record of 43.29 set by American Butch Reynolds in 1988. Johnson’s world record stood until South Africa’s Wayde van Niekerk ran 43.08 at the 2016 Rio de Janeiro Olympics.

Both world records were set in the racewalking events in Paris. Ecuador’s Jefferson Perez won the 20K event in 1:17:21 for the first of his three consecutive world championships. Perez’s time broke the world record by 1 second and remained the world record for nearly 5 years. In the 50K racewalk, Poland’s Robert Korzeniowski won his third and final world title in 3:36:03, breaking his own world record by 33 seconds. 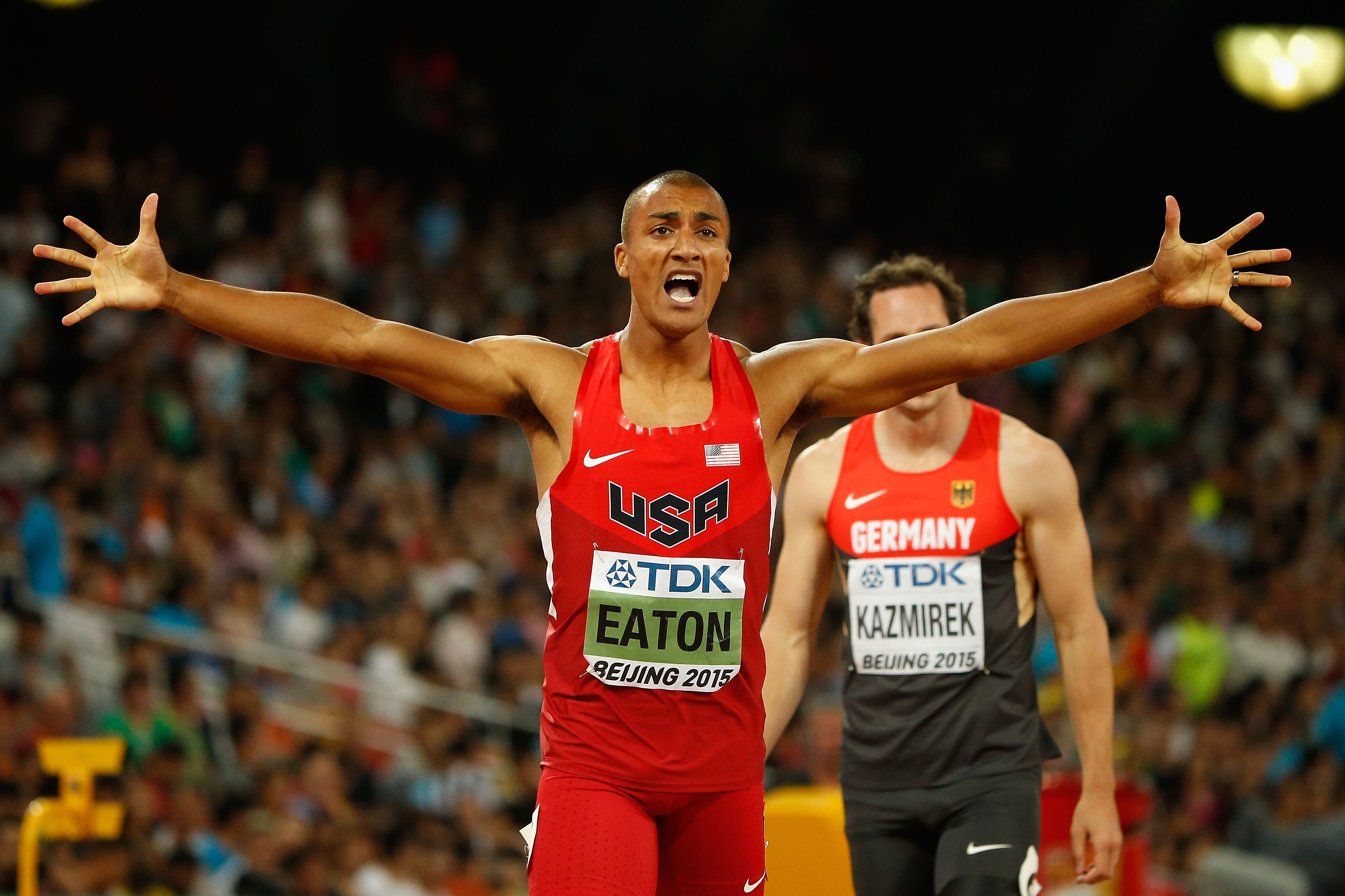