Asia may have been the first continent that was hit by the Covid-19 pandemic, but strict guidelines remain in place across many countries, and there is still some uncertainty about when and how competition will resume.

There are glimmers of hope, though, and many of Asia’s leading athletes are hopeful of returning to action soon.

Chinese athletes have continued to train intensively across various locations. All training bases have been restricted to national-level athletes to help ensure their safety. Some training centres have also staged virtual competitions via online video connection.

Two-time world shot put champion Gong Lijiao has found that being more vocal in training sessions has helped her cope with the lack of competition.

“During this time without competitions, I’ve had a competitive fire in my heart that I’ve been unable to let out,” says Gong, who has been training at the national team training base at Beijing Sports University under the guidance of her coach, world and Olympic finalist Cong Yuzhen. “So during my training sessions, I’ve been shouting loudly to vent my feelings.”

In lockdown, Gong has spent time trying to learn English and has been creating videos to post on Douyin, a Chinese social media platform that is similar to Tiktok. The distractions have helped her come to terms with the postponement of the 2020 Olympic Games.

“I was very sad in the beginning, because I am an old athlete. I have been preparing for so many years for Tokyo 2020,” says the 31-year-old, who earned Olympic silver in 2012. “But now I feel okay. I can wait. No matter when it will be held, I can wait.” 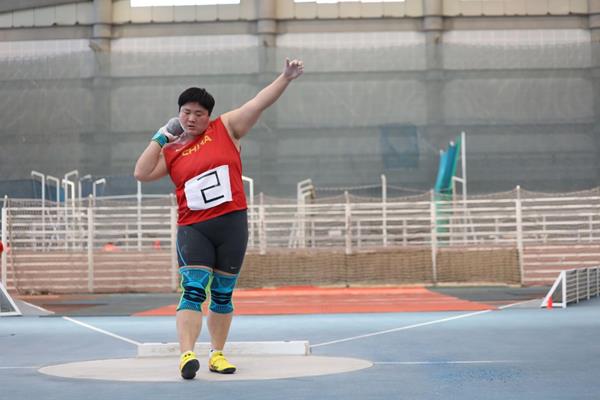 Fellow world champion Liu Hong relocated to Kunming earlier in the year, and so has been able to take advantage of the city’s 2000 metres of altitude while in lockdown.

“Moving with my family to Kunming has been the biggest change for me so far this year,” says the 20km race walk world champion. “The weather here is perfect for training, and we are changing our previous views on altitude training.

“Usually, June is the time when training is the most difficult and stressful, and it is the key preparation stage for major competitions in August and September,” she added. “But all the training this year has returned to basic practice, leaving my body in good shape. I’ve also had more time to try things in training that may make me perform better in future.

“I’m really looking forward to racing, and I feel even more appreciative now of the things I have been used to. I miss the feeling of competing with other race walkers all over the world. Life doesn’t always go smoothly, but we should face it with positivity every day.”

Sprinter Su Bingtian, the fastest Asian man in history at 100m and 60m, had hoped that 2020 would be the year he would improve on his world indoor silver from 2018 and his 4x100m Olympic fourth-place finish from 2016.

Although he, like many athletes, has struggled for motivation since all of the year’s major events were postponed or cancelled, he has been able to focus on some positives in recent months.

“My training has continued as normal, but I feel mentality fatigued and sometimes lacking in motivation,” said Su, who has been training in Beijing under the tutelage of Randy Huntington. “I’m also really missing my hometown in Guangdong province, 2000km away from Beijing.

“But compared to many ordinary young people who are involved in athletics, we national athletes are very lucky to have a guaranteed training base. And because of the lockdown, I’ve had more time to study,” added Su, who is an associate professor at Guangdong Jinan University.

Fellow sprinter Xie Zhenye, who set an Asian 200m record of 19.88 last year, has also been based in Beijing, while his coach, Rana Reider, is over in the USA.

“Although it is summer for us, my current training has been more like winter training,” says the world finalist. “My life currently revolves around my dormitory, the training facility and the canteen. 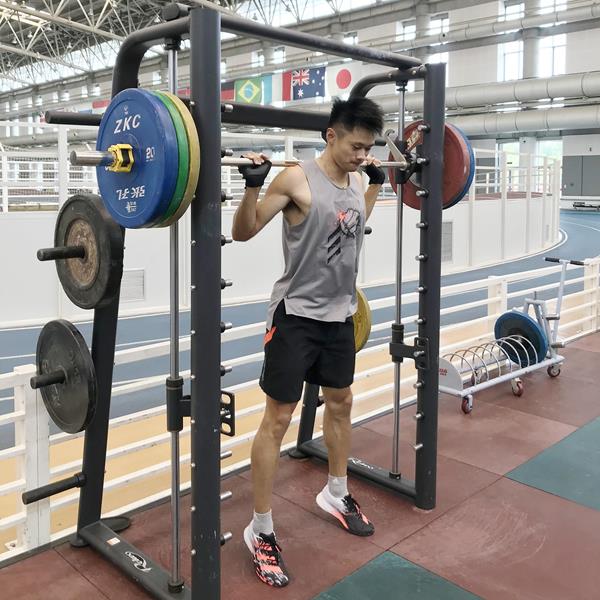 “The biggest difficulty is the lack of races. I also really want to go back home to Zhejiang Province – about 1300km away from Beijing – for Spring Festival, which is one of the most important festivals in China. Phone calls cannot replace meeting and hugging in person.”

Like Su and Gong, Xie has also been able to focus more on his studies in recent months and is trying to remain positive.

“I am very happy that I graduated with a master's degree from Zhejiang University,” he says. “But it is also a pity that there is no way to attend the graduation ceremony at school.

“This year has been bumpy for everyone. But we need to keep looking forward to the flashes of victory that lay ahead.”

Fellow Asian champion Xie Wenjun, based in Shanghai, has also been coached remotely. The World Championships fifth-place finisher has been making videos in training and sending them to Andreas Behm, coach to world record-holder Aries Merritt.

“The lack of competition has disrupted our original plan, but the training is normal,” says Xie. “I’ve been sending my training videos to my coach for analysis and then we discuss the training plan and technology on line. 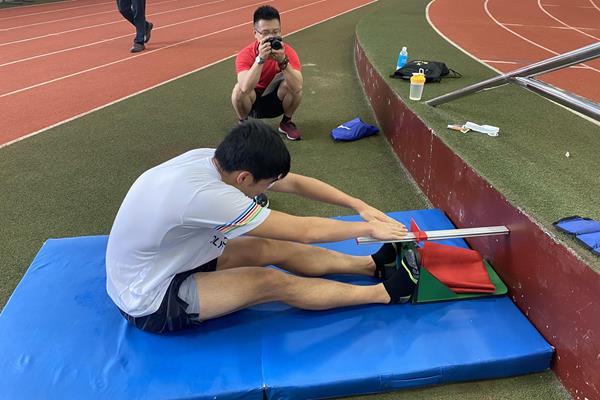 “The postponement of the Olympic Games gives me more time to prepare, and now I am going all out,” he added. “Difficulties are only temporary; as long as you work hard, you will be able to overcome them.”

Japan, like many national federations, has this week issued guidelines to athletes and meeting organisers as the country prepares to return to competition.

“Basically I’ve been following the guidelines of the Japanese government,” he says. “In Japan, the government requested that sports facilities close, but they didn’t prohibit us from training on roads so I could train as usual. However, they requested us to voluntarily refrain from group warmup exercises, so I trained alone. In addition, we weren’t prohibited from going out but were requested to refrain from it, so I had more time to stay at home. I used this time to take care of myself. I have been doing rehabilitation training I started in 2017, and I’ve kept doing it during this term.

“I was strongly disappointed to hear the news that the Tokyo Olympic Organising Committee decided not to hold the Games this year. However, as a result, it might be lucky for me that the Olympics were postponed. I’d like to make this luck work for me and keep trying to do my best to stand on the start line of the Tokyo Olympic Games next year in perfect condition.

“Just now, not only Japan but all of the world is in terrible circumstances. Perhaps it will end up being a situation in which we won’t be able to hold the Olympics. If we get to that point, we have no choice but to accept it. However, now, if people all over the world unite and work together with the will to try to hold the Olympics next year, I think it will be a power to help contain the coronavirus. I’m hoping that it is so strong that we can overcome this together.”

Javelin thrower Cheng Chao-Tsun, who won gold for Chinese Taipei at the 2019 Asian Championships, says he would be disappointed if the Tokyo Olympic Games were to be cancelled.

“I have been well looked after by the National Sport Training Centre, so I haven't had any problems with my progress in training,” says Cheng, who holds the Asian record at 91.36m. “However, I am in the golden period of my athletics career as I am 27 years old right now, so I'm anxious about the possibility that the Tokyo Olympic Games may be cancelled."

Naoto Tobe, who holds the Japanese indoor high jump record, has been able to return to his usual training facility in recent weeks, which has put an extra spring in his step.

“The situation in Japan has got better and I started training on the track two weeks ago,” said Tobe, winner of the World Athletics Indoor Tour in 2019. “In Japan, most tracks and training facilities were closed from the beginning of April to mid-June, so I could only train in my house or in a park or on the road at that time. Of course I couldn’t do technical high jump training, so I did sprint training and easy exercises, but now I'm starting to train on the track again.

“For the Olympics, my goal is unchanged: I’m still aiming for the gold medal,” he added. “I am not in a panic because I have more than a year. I will prepare slowly for it.”

Korean distance runner Choi Kyung-Sun started 2020 by setting a national half marathon record of 1:08:35, and had been looking forward to making her Olympic debut later this year. But she too is looking forward to being able to race again in the near future.

“Unfortunately I couldn't attend my planned competitions due to the Covid-19 situation, but I am doing my best every day by consistently and sincerely carrying out my training schedule,” says the Asian Games bronze medallist. “I am especially motivated to show my best performance at the Olympics next year.

“I was sad to hear about the cancellation of the New York City Marathon, and I hope that the pandemic will be over as soon as possible and that the elite and the mass participants can meet and run together again at the event as they used to.”

BACK
Pages related to this articleAthletes
Hong Liu

International events off the cards, but Ocean...