Jepkosgei dominated the women’s race from the start to finish to pick up her first-ever marathon win in 2:39:53, ending up more than three minutes clear of British international Hayley Haining with Scottish veteran Katie White completing the podium.

“It’s my first major win abroad,” Jepkosgei said. “After 10k, the weather changed and I had to deal with that. And then at 30k, I was left to run on my own but I kept my pace going and that went well.”

In the men’s race, Kiprono bided his time in what gradually became a two-way contest with Moroccan challenger Abdelhadi El Mouaziz after an early leading group of five had been whittled away by the time they reached 13 miles in 1:08:25, with the duo each taking their turn to edge ahead before regressing once more.

Eventually it was Kiprono who retained most in reserve, overhauling his rival with four miles left and then surging out of reach, crossing the line in 2:19:55, well outside the course record.

“I came ready for this race,” Kiprono said. “I kept alert to where he was and I wasn’t going to push if he was just too strong for me. I was happy to sit back but then I felt no one was going to try and catch him at about 18 miles so I told myself to push.”

“I thought maybe I could get him and then get a good time. But I left it too late to really get the time I wanted.”

Compatriots Japhet Koech and 2015 winner Peter Wanjiru were adrift in third and fifth respectively with the USA’s Chris Zablocki denying Africa a sweep of the top five with his fourth place finish.

Darrell Hastie and Tracy Millmore were the male and female winners of the adjoining Edinburgh Half Marathon, clocking 1:10:38 and 1:18:41 respectively. 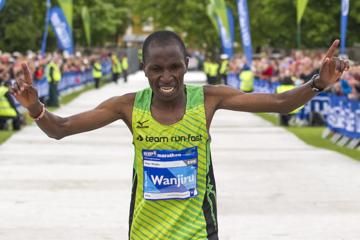