Koech returns to Riga with a course record as his target

Duncan Koech ahead of the 2014 Nordea Riga Marathon (© organisers)

Kenya’s Duncan Koech will be bidding to retain his Nordea Riga Marathon title and will start as favourite not only to break the tape but also set a course record in the Latvian capital at the IAAF Bronze Label Road Race on Sunday (18).

Koech ran 2:15:34 to set the current course record in Riga 12 months ago but the prolific marathon racer has also run inside 2:10 on four occasions in the past two years.

The most recent of his 18 careers marathons was just five weeks ago in Vienna, where he finished fourth in 2:09:17 but at the pre-race press conference in Riga on Friday, he assured his audience that he was feeling no ill effects from his Austrian outing, despite the fact that little more than a month had elapsed.

“I am feeling confident that I can successfully defend my title,” said Koech, ahead of the 24th edition of the race.. “All I want is good weather, no wind.”

The race organisers expect warm weather, which may mitigate against very fast times, with temperatures likely to be around 15-17 degrees Celsius at the start and rising to around 20 degrees by the time the leaders come home.

However, now 36, Kenei Kiprotcih has not broken 2:10 since 2009 and so it’s difficult to see him challenging for first place.

Ndungu to be Koech's toughest challenger?

Perhaps a more realistic challenger to Koech is Geoffrey Ndungu, who won the 2011 Dublin Marathon in what remains his personal best of 2:08:35 but who was just seven seconds outside that time when finishing third in Vienna last year.

Whether it is Koech or one of his compatriots that wins, there is a strong possibility that a Kenyan will take the honour in Riga four the fourth consecutive year.

One man who might just possibly spring a surprise is Uganda’s Peter Kibet. Still only 21, he is the reigning Ugandan 10,000m champion and was fourth in the World Mountain Running Championships in Poland last September.

Although most of his personal best times are relatively modest, having been achieved at altitude, Kibet has the potential to make an impact on his marathon debut.

Although his chances of winning might be slim in the face of such a strong East African armada, a lot of local eyes will be on Valerijs Zolnerovics, who set a Latvian national record of 2:14:33 in Frankfurt last October and who is looking to improve further in front of family and friends on Sunday , no doubt boosted by the fact that the organisers has organised various cultural events along the course to celebrate the fact that Riga is European Capital of Culture this year.

The marginal favourite in the women’s race is Kenya’s Joan Kigen, now 36, who set a personal best of 2:31:27 at the 2013 Bournemouth Marathon last October.

The fastest women in the field is her compatriot Magdaline Chemjor, who won the 2007 Amsterdam Marathon in 2:28:16 but who has never since got within 10 minutes of that time. The women's course record is a relatively modest 2:37:14, set by Ethiopia's Desta Girma Tadesse in 2012.

Not contesting the marathon but instead going over the associated half marathon is well-known local runner and two-time New York Marathon champion Jelena Prokopcuka.

The organisers expect around 25,000 people to participate in the four races on Sunday, headlined by the Baltic countries’ only IAAF Label Road Race. 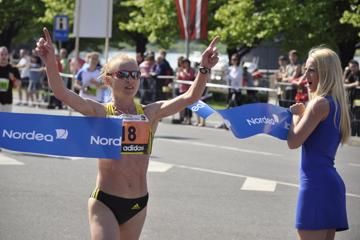 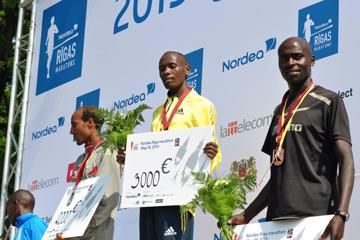 Koech fulfills his role as favourite with Rig...