After his 19.49 200m in Baton Rouge in April, Erriyon Knighton will look to make a similar statement in the 100m when he goes head-to-head with Noah Lyles at the New York Grand Prix on 12 June.

The event, which takes place as part of the World Athletics Continental Tour Gold series for the first time, will see a number of global medallists in action at the Icahn Stadium.

USA’s 18-year-old Knighton finished fourth in the 200m at the Tokyo Games and since then has continued to impress. His 19.49 in Baton Rouge improved his own world U20 record and moved him to fourth on the world all-time list, 0.01 ahead of his compatriot Lyles’ best time from 2019.

They also have a competitive 100m head-to-head record. The pair have met over the distance twice this year, with Knighton narrowly edging Lyles on both occasions. Both clocked 10.39 into a -5.6m/s headwind in Bermuda, with Knighton getting the nod for the runner-up spot, and then the teenager won in Gainesville, a 10.04 PB to 10.05.

Bednarek, meanwhile, claimed Olympic 200m silver ahead of Lyles and Knighton in Tokyo, running a PB of 19.68, and capped his 2021 season with victory at the Diamond League final in Zurich. He leads the line-up for the half-lap event in New York.

Holloway headlines the 110m hurdles as he continues to work towards a defence of his world title on home soil at the World Athletics Championships Oregon22 in July. The Olympic silver medallist, who sits second on the world all-time list with his 12.81 PB from the US Olympic Trials in Eugene last year, equalled his own world 60m hurdles record in Belgrade in March and went on to win the world title.

Another US Trials champion confirmed to compete in New York is Thomas. She won her national title over 200m last year in 21.61, making her the third-fastest woman in history over the distance. The 25-year-old went on to win Olympic bronze in the 200m and silver as anchor of the USA’s 4x100m team.

Leading the women’s shot put field is Saunders, who secured silver at the Tokyo Olympics and threw her 19.96m PB last year in Eugene. 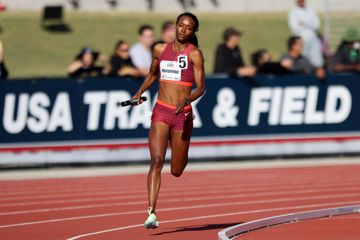 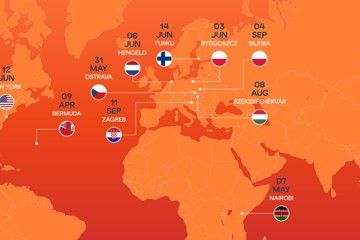