Consistency is key for Camacho-Quinn

It has been quite a start to the season for Jasmine Camacho-Quinn.

As she took to the track for the USATF Grand Prix – the opening World Athletics Continental Tour Gold meeting – on Saturday (24), the 24-year-old felt tired. But that’s not surprising. Just one week before she had improved her own Puerto Rican record to 12.32 to move to equal seventh on the world 100m hurdles all-time list. The weekend before that she had recorded her fastest ever opener. But as she stormed out of the blocks in the rain at Eugene’s Hayward Field, there were no signs of that tiredness at all. Nor when she crossed the finish line a clear winner in 12.46.

She knew she would be able to do it, because she had told herself that she could.

“The first meet was just seeing where I’m at and I ran faster than I expected,” says Camacho-Quinn, reflecting on her slightly wind-assisted 12.47 (+2.1m/s) on 10 April in South Carolina. “Then, last weekend, I wasn’t expecting to run that either, I just wanted to win,” she adds of her Puerto Rican record in Florida.

“So, this weekend, I was telling myself ‘I’m tired’ but I was thinking ‘don’t do that, because you’re going to ruin everything’. It’s basically a mind game – you tell yourself you can’t do it then you’re not going to be able to. Tell yourself you can, and you can.

“It’s really good that I’m running consistent. I’m not really focused on trying to hit a certain time because the moment you start to focus on a certain time, that’s when you mess up. I just want to get out there and run and have fun while doing it.”

Camacho-Quinn certainly seems to be enjoying things right now, but the journey has not always been easy. In 2016, the then teenager was left heartbroken after she hit a hurdle and missed out on the final when making her Olympic debut. Five years later, everything is coming together as she targets Tokyo.

“At first, when I started hurdling with my coach, I was like ‘I don’t want the same thing to happen again’,” says the University of Kentucky alumna, who now works with coaches John Coghlan and Gary Evans. “And he was just like, ‘don’t even think about that because you start thinking about that, it might happen again, so don’t focus on that’.

“Yeah it’s an Olympic year, but my whole mindset is like ‘okay, let’s go out there, let’s do this’, instead of dwelling on what happened in the past. I’m keeping a positive mindset and just trying to keep my body healthy to make it there.”

On her coaching set up, she adds: “John Coghlan is from Ireland – he flew all the way in just to train me. He and coach Gary Evans came together for me, to get me to this level. Having the speed and strength from working with coach Gary and then putting hurdles with it from coach John, I think that’s all coming together great and I really appreciate them for that.”

Camacho-Quinn had been included on the Puerto Rico team for the World Athletics Relays in Silesia on 1-2 May but will not be racing there as she instead takes a break to let her body rest as she works towards Tokyo. A Puerto Rican woman has never won an Olympic medal in athletics before and after her recent record run, Camacho-Quinn is keen to make more history for her nation.

“I’m ready to give it my all this Olympics,” she says. “It wouldn't be the first gold medal for Puerto Rico because we do have a tennis player who won in 2016 but for track – I’m really looking forward to it. I know it’s something big, not only for myself but for Puerto Rico, for our family. So I’m really excited.” 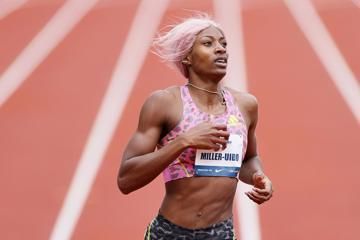