Rebecca Kangogo Chesire took almost half a minute off the Stramilano Half Marathon course record on Sunday (29), winning in 1:08:21. Fellow Kenyan Thomas James Lokomwa successfully defended his title in the men’s race.

Chesire, who set a marathon personal best of 2:25:22 in Dubai earlier this year, and Angela Jemesunde Tanui went through 10km in 32:23, well inside the course record pace.

Chesire then broke away, passing 15km in 48:27 and opening up a gap of 11 seconds over Tanui. Chesire’s lead grew and grew over the final five kilometres, crossing the finish line in 1:08:21 to finish almost a minute ahead of Tanui and take more than two minutes off her PB.

In the men’s race, pace-maker Victor Chumo, Thomas Lokomwa, Kennedy Kipyego and Robert Kirui Kipkoech set off from Piazza Castello in the Centre of Milan at a brisk pace. They went through 5km in 14:17 and 10km in 28:32 with Kipkoech having already fallen behind.

Pace-making duties over, Chumo then dropped out, leaving Lokomwa and Kipyego out in front. They passed the 15km mark in 42:55 having slowed slightly, but they were still more than a minute ahead of Yassine Rachik, an Italian-based runner of Moroccan origin who has lived in Italy for 11 years.

Lokomwa started pushing the pace after 15km. At 17km, reached in 48:42, Lokomwa had opened up a 15-metre lead, but it was short lived as Kipyego had caught up with his fellow Kenyan with two kilometres to go.

In a sprint finish during the final kilometre, Lokomwa found the extra strength with 700 metres to go and crossed the finish-line in 1:00:33, holding off Kipyeko by six seconds. Both athletes improved their PBs by a significant margin.

Rachik overtook Kipkoech in the second half and went on to finish third in 1:03:11, taking seven seconds off his PB.

“I am happy to win my second consecutive Stramilano,” said Lokomwa. “The pace-makers did a good job but I hoped to dip under the 60-minute barrier. With the prize money from this win, I want to help build a primary school in Kiambogo.”

No fewer than 6400 runners entered the half marathon while about 50,000 runners took to the street in the Central Piazza del Duomo to take part in the popular mass non-competitive 10km race on a sunny and warm Sunday morning. 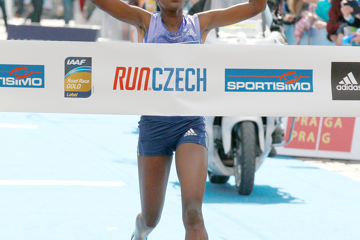 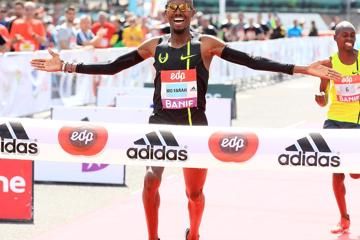