After the resounding success of the half marathon event held barely four weeks ago, when no fewer than four athletes ran faster than an hour, the city of Valencia is ready to hold the 42.195km event, an IAAF Bronze Label Road race, this Sunday (16).

The men’s course record belongs to Kenya’s 2013 winner, Felix Kipkemboi Keny, who clocked 2:07:14 to set a Spanish all-comers’ best in the process. The 29-year-old will be in contention again this year to contest his second marathon of the season following his 2:09:04 effort in Hamburg last May. Keny’s only other outing this year was the Valencia Half Marathon where he clocked 1:04:47.

The fastest athlete in the field is fellow Kenyan Albert Matebor, who ran 2:05:25 in Frankfurt three years ago. The 33-year-old has not produced that kind of form this season, but his season’s best of 2:10:40 is not too much slower than Keny’s.

But the athlete who has shown the best form this year – and could therefore be considered the favourite – is Kenya’s Jacob Kendagor. He ran a PB of 2:07:53 in Daegu in May and has a half-marathon season’s best of 1:00:32, less than a minute shy of his PB. He warmed up for this race by contesting the Valencia Half Marathon, clocking 1:01:35.

Kenya’s Geoffrey Ronoh boasts a solid trio of half-marathon performances this year, all ranging between 59:45 and 1:00:17, and has also set a 10km PB of 27:28, the second-fastest time in the world this year. But the 31-year-old is relatively inexperienced when it comes to the marathon; his only performance to date over the classic distance was a 2:15:51 clocking in 2013. If he gets it right this weekend, he could be the biggest danger.

Other sub-2:09 men in the field include Qatar’s Nicholas Kemboi, Kenya’s Francis Kiprop and Eritrea’s Amanuel Mesel, who set his current career best of 2:08:17 in Valencia last year to finish runner-up.

On the women’s side, the depth of the field is a little more modest.

Kenya’s Emily Samoei holds the quickest ever time among Sunday’s contenders thanks to her 2012 Barcelona time of 2:26:52 while Namibia’s Beata Naigambo is the second quickest with a 2:27:54 clocking to her credit. Naigambo finished third one year ago in Valencia timed at 2:30:48.

With Ethiopian women having won the past three editions of the Valencia Marathon, that streak could end this weekend.

An attainable target for them should be the women’s course record held by Ethiopia’s Azalech Woldeselasse, who won last year with 2:27:01.

Watch out too for Pamela Rotich, winner of the Seville Marathon earlier this year in 2:35:43, Ednah Kimaiyo (2:34:25) and Ethiopia’s Alem Fikre, the Madrid Marathon winner last April in 2:32:11.

The event is jointly organized by the City Council of Valencia and ‘Sociedad Deportiva Correcaminos’ and this year the event has beaten his record again with 13,000 entries. A quarter of the field (3200 athletes) comes from overseas with no fewer than 57 countries represented.

In addition to the main event, the associated Valencia 10km race will have about 8000 runners.

The start and finish areas of both races are located in the magnificent City of Arts and Sciences, which is close to the centre of Valencia.

The circuit passes some of the most famous city sites, such as the Formula 1 circuit, the historic city centre, and the America’s Cup port area.

Weather forecasters predict a sunny but quite windy day with a temperature in the range of 13-15°C. 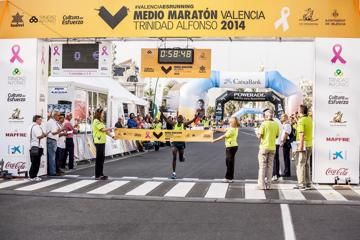 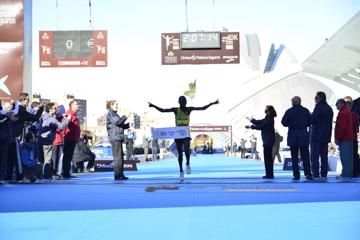 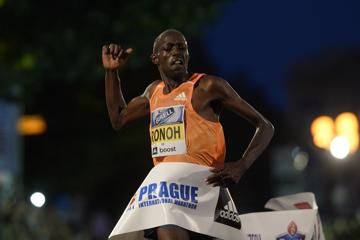 Ronoh causes another surprise on the Czech ro...