Kemboi, Jager and Masai among vast array of talent in Madrid

Madrid’s San Silvestre Vallecana, an IAAF Silver Label Road Race and arguably the most prestigious of the myriad New Year’s Eve races around the world, offers quality line-ups in both the men’s and women’s categories on Thursday night (31).

The race is held on a slightly downhill 10km point-to-point course and starts alongside Real Madrid’s Santiago Bernabeu stadium before finishing on the pitch of another Spanish first division club Rayo Vallecano in Madrid’s southern suburbs.

The men's contest looks to be a three-horse battle in the guise of last year’s winner Mike Kigen, of Kenya, and two of the world’s best steeplechasers: four-time world champion Ezekiel Kemboi of Kenya and US record-holder Evan Jager.

Experience should play in favour of Kigen as he won comfortably in 27:51 last year but he will have to contend with the superior speed of Kemboi and Jager on a fast circuit like Madrid’s.

In their speciality event, double Olympic champion Kemboi has ducked under the 8:00 barrier three times throughout his career, topped by a 7:55.76 clocking in Monaco back in 2011 while the 26-year-old Jager set a North American record of 8:00.45 at the IAAF Diamond League meeting in Paris in July, despite falling at the final barrier.

Waiting for the minor signal of weakness from this triumvirate of favourites will be the Spanish duo of Roberto Alaiz and Toni Abadia. Alaiz is fresh from a creditable seventh spot at the European Cross Country Championships in Hyeres where Spain took team gold while Spanish 10,000m and cross-country champion Abadia will be back in contention after a virus prevented him from competing at the European Cross Country Championships. They will be joined by Alaiz’s training partner Sebastian Martos, the Spanish steeplechase champion.

The 25-year-old Alaiz has already two third-place finishes to his name in Madrid (2012 and 2013) while Abadia, also 25, finished third last year. They finished fifth and eighth respectively in the 5000m at the 2014 Europeans Championships.

Kenya’s 2009 world 10,000m champion Linet Masai appears to be the athlete to beat in the women’s race. After a below-par 2015 for much of the season, the 26-year-old now looks to be in better form following a couple of convincing cross-country victories in Soria and Alcobendas last month.

Masai won in Madrid two years ago in 31:33, one year after being runner-up, so Thursday’s race will mark her third appearance in the event.

Forecasters predict a mild night on Thursday with possible rain and temperatures ranging between 8-10C by the time the gun goes for the last IAAF Label Road Race of 2015.

In addition to the elite contest, there will be a mass race with almost 40,000 entrants taking to the streets two-and-a-half hours before the main event.

BACK
Pages related to this articleAthletes
Ezekiel Kemboi 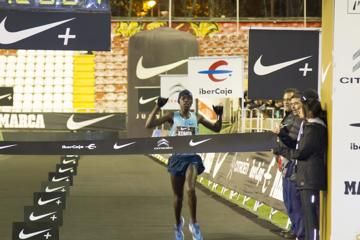 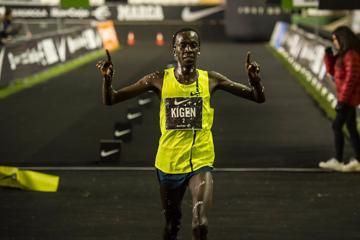