Silver tastes sweet for Schafer after years of hurt

Two years ago she was at her lowest ebb. Carolin Schafer sat hunched by the side of the track at the Bird’s Nest Stadium in Beijing. The German had just fouled all three attempts in the long jump during the heptathlon at the IAAF World Championships Beijing 2015, effectively ending any meaningful involvement in the competition.

At that moment it all came flooding back. Only six months earlier her partner at the time, the volleyball player Dennis Hefter, was tragically killed by a train while attempting to cross the tracks. She couldn’t hold back the tears.

“Although the stadium was fully occupied, I had never felt so lonely,” she said. “What linked me to him was the stadium. I became aware of it all again.”

Fast forward to 2017, and the emotions couldn’t be more different. On Sunday night, the 25-year-old claimed the silver medal in the heptathlon at the IAAF World Championships London 2017 with a score of 6696 points, finishing behind Olympic champion Nafissatou Thiam of Belgium.

“I think only those very close to me know how much this medal means to me and how hard these past few years have been,” she said. “I think one of my biggest assets is my mental strength that I have acquired over those past few years. There have been some events in my personal life I had to learn to fight back from.”

Having finished fifth at the Olympic Games in Rio last year, Schafer had to endure more emotionally-draining events. During the winter, while she was preparing for the 2017 season, her coach Jurgen Sammert developed cardiac arrhythmias and spent a considerable time in hospital.

He is now on the road to recovery, but has been advised to slow things down considerably, something which posed challenges to Schafer’s preparations for London. Her training partner Claudia Salman-Rath, who finished in eighth place on Sunday evening, opted to leave the group, to lower Sammert’s workload.

“The preparation was of course anything but ideal,” she said. “It was a very difficult time. We didn't know how he was holding up, whether he would be able to continue as a coach at all, and we needed to relieve him as much as we could.

“There were a lot of restrictions in training. We had to go easy on him. So in order to take some of the pressure off him, Claudia left the group. So for me it was even more important to give something back to him. This medal is for both of us, and the many years of hard work and what we have been through together.”

Schafer had a glittering underage career, first taking silver at the IAAF World U18 Championships in Ostrava in 2007, before claiming gold at the IAAF World U20 Championships the following year in Bydgoszcz. However, her early years as a senior proved much less fruitful, and the German admits to having struggled to make the transition from the junior ranks initially, pin-pointing the 2013 European U23 Championships, where she could only finish in sixth position, as a significant turning point in her development.

“The Euro U23s were a key moment for me,” she said. “Nothing worked out and we sat down afterwards and reassessed what we could do to improve things regarding nutritional changes, psychologists, and just changing the entire set-up in general.”

“It was a difficult transition. In order to keep up with the seniors, you have to increase the workload and that means there is a bit of a grey area with regards how much is the right amount. I had to learn to deal with injuries, but also to be patient, that sometimes you do have to wait a few years.”

After the 2016 season, Schafer felt she needed an extended break from the sport to reinvigorate her appetite for athletics. She wanted to take a step back from training, which she found took up most of her life, and to just live normally for a while. She took two and a half months away from the sport, and during that time she admits she didn’t do a single training session, instead deciding to do some travelling and to spend more time with her family and friends.

“I literally did nothing. I just enjoyed doing the things that normally as a woman I wouldn't have time to do, because sport always takes priority. I took a step back from the sport to just enjoy a regular life for once. So after this break I was incredibly motivated going into the new season.”

The time away has done her no end of good. This year has seen her significantly improve her lifetime best to 6836 points in Gotzis in May, bettering her previous mark by a massive 279 points. And now with a silver medal from London secured, this year has highlighted Schafer’s ability to bounce back from severe personal challenges, setbacks which many would find too difficult to overcome.

“I'm in general a roly-poly doll. I always get back up again and try to come back better than I was before. I don't think anyone expected me to come back this strong after 2015. Now I have a solid environment, I've reset my personal life and am a very happy woman.”

What a difference two years can make. 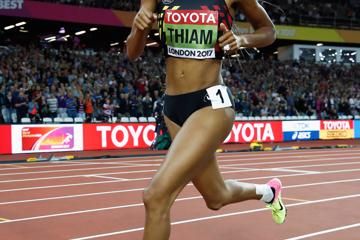