As we announced on Earth Day, World Athletics will be embedding mandatory sustainability requirements into all the competitions it owns or sanctions in an effort to reduce the environmental impact of the sport. To assist organisers in delivering more sustainable events, we’ve developed two tools that work in tandem: a Sustainable Events Management System*, which offers best practice guidance that covers 15 key areas of event planning and delivery, and the Athletics for a Better World Standard, a certification that measures and scores an event’s achievement in sustainable delivery. Organisers of our one-day meeting and Label Road Race events are being asked to pilot the system in 2022 and 2023 before it’s implemented in 2024.

That guidance and the Standard were put to the test for the first time on 7-8 May at the Stadtwerke Ratingen Mehrkampf-Meeting, an important early season stop on the World Athletics Combined Events Tour, marking the perfect reason to kick off the World Athletics Sustainability Blog, a bi-weekly (for now) update where we’ll be sharing examples of some of the initiatives athletics competitions are embedding into their events this year and other news from the intersection of sport and sustainability.

What’s in a name?

For many organisers, the Athletics for a Better World Standard’s checklist can seem a bit intimidating at first glance – even daunting if principles of sustainability in an event delivery sense are a new periscope through which they look at how their event is organised. We’re nonetheless encouraging organisers to test the system so they can see where in the sustainable delivery journey they already are – in most cases organisers will see that they’ve already taken steps they weren’t yet aware of.

That was the case in Ratingen, where organisers were eager to give the Standard a spin, to first see how they stack up and second to set a starting point from which to improve year upon year.

In Ratingen, the event’s name is a good place to start. Stadtwerke Ratingen, the meeting’s title sponsor, is this northwest German’s city’s municipal utility and power company which has, since last October, supplied all of its private and commercial customers with power produced from 100% renewable sources. That includes the stadium that hosts the event.

“As an energy supplier, sustainability is a very important topic for us in recent years,” said Marc Bunse. “We continuously strive for clean solutions in terms of climate protection.”

The switch to 100% renewables, said Marc Bunse, the company’s CEO, has lowered the CO2 consumption rate by 0.75 tonnes per person annually.

“The goals for climate protection in the city Ratingen are very ambitious and we are proud to contribute to these goals. We’re investing in an e-mobility charging station infrastructure, converting our vehicle fleet to e-vehicles and investing in alternative heating possibilities. Guiding our customers from consumers to sustainable prosumers is a very important topic for us.” The company’s goals align with Germany’s target of becoming greenhouse gas neutral by 2045. 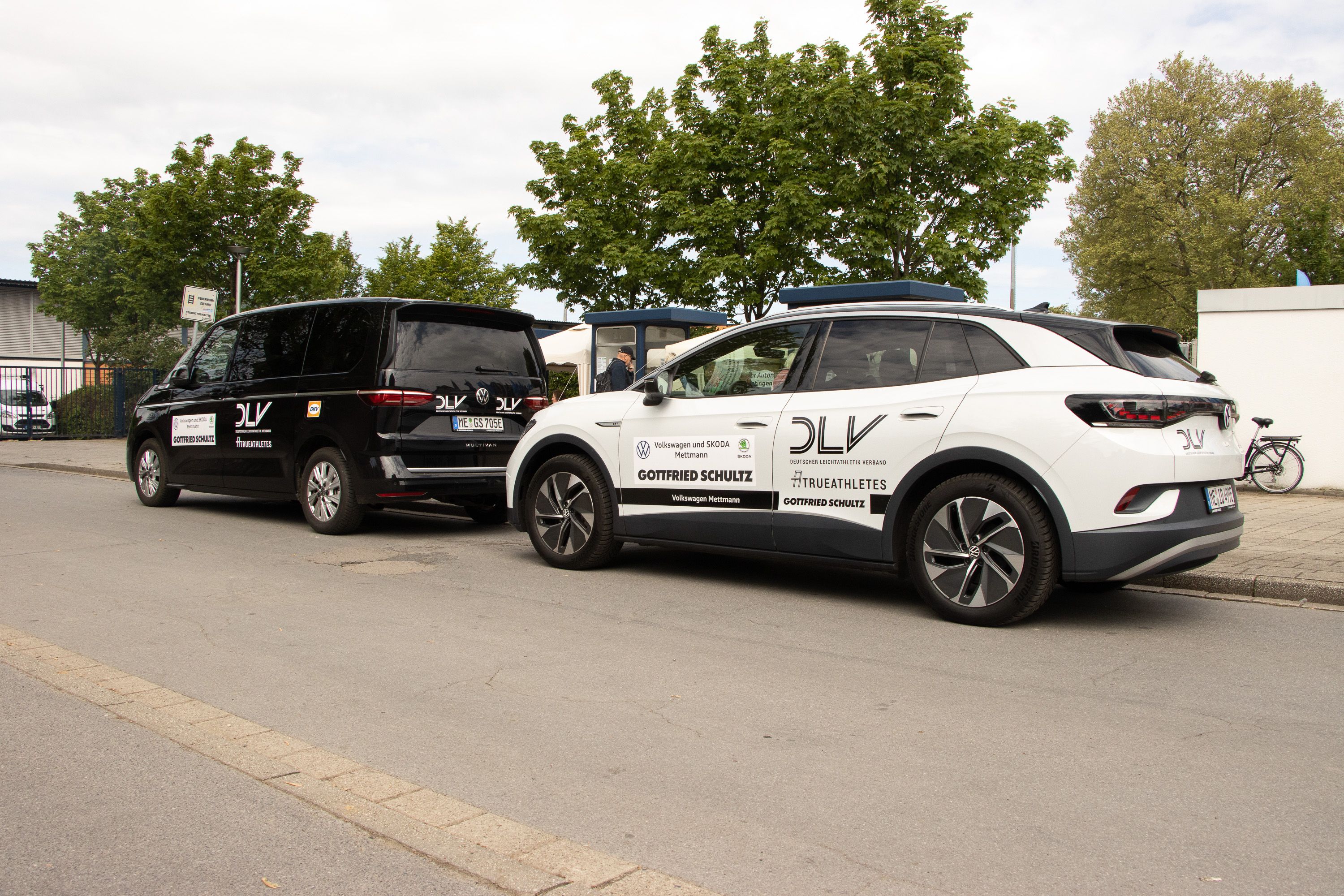 Transporting fans and athletes to the event was also a strong point on its maiden scorecard. The meeting used a fleet of four electric vehicles for the first time – three fully electric sedans and a hybrid van – for all of its immediate transport needs, including shuttling athletes and coaches to and from the stadium, the airport or central train station.

Relaxa, the official hotel, is less than two kilometres away – that’s just six minutes by car or bike, or a 22-minute walk. Several athletes selected the latter, presumably to take care of their early morning shake-out on the way to the venue. There was also a stash of bikes in the hotel lobby reserved for event staff to get to and from the stadium.

Fans were also encouraged to bike to the event and many did, filling to capacity the stadium’s bicycle parking lots. A tram stop was located just two short blocks away.

Other areas where Ratingen scored well was with waste management, particularly around food and catering: no single-use bottles or dishes were used, a deposit system was in place for beverages and visitors were encouraged to bring their own cups or bottles.

There’s lots left to do looking ahead but what organisers found most encouraging was that they’re already moving in the right direction. And they’re already providing examples for others to follow.

The German federation published a report on the Athletics for a Better World Standard and my visit to Ratingen last Friday.

World Athletics staff will also be on hand at the Müller Birmingham Diamond League meeting on Saturday to help organisers there test the Standard. The weekend will include the debut of ‘Rock Your Cause’, a workshop on climate change communication designed specifically for athletes, which will be held on Friday (20) afternoon.

The main thrust of the workshop is to identify and equip athletes with the most effective ways to speak confidently about the issues they care about. In this case, for athletes looking for ways to express their concern about the climate crisis in order to inspire change.

While the workshops focus on the climate crisis, what will be presented can be adapted to any topic that the participants are passionate about.

The workshop will be conducted by Dr Madeleine Orr and Dr Daniel Sailofsky, noted academics and communicators in the sport and sustainability space and experts on climate change communication. The workshop will last one hour, from 15:30-16:30 at the Crowne Plaza Hotel, and scheduled so that it won't interfere with athletes’ pre-meet routines. Space is limited to about 25 people per session so athletes are encouraged to RSVP to sustainability@worldathletics.org.

*The Sustainable Events Management System is available in English, French and Spanish.